For those of you who haven’t read the first part of our Icelandic journey – you can find it here. And this is how the story continues:

After the freezingly cold night we got up and put everything in the car in the fastest way possible, I took a hot shower which brought me back to life. We headed north and, as the weather was quite foggy and windy, we decided to just drive and check some places from the car. We went to the bohemian village of Seydisfjordur, which wasn’t so impressive itself, but was located in a marvelous valley, surrounded by snow-capped mountains and cascading waterfalls, running down on both sides of the road which actually made this place so special. Interestingly, the steep-sided valley has made the town prone to avalanches. In 1885 an avalanche killed 24 people and pushed some houses into the fjord bordering the town. So I was glad we were there in summer and don’t have to think whether we will have a somewhat too adventurous experience.

Our next stop was smelly Hverir – a geothermal area with colorful sulfurous mud springs, which is best to be visited in a cold day, when all the steam, coming from the craters can be seen from hundreds of meters. 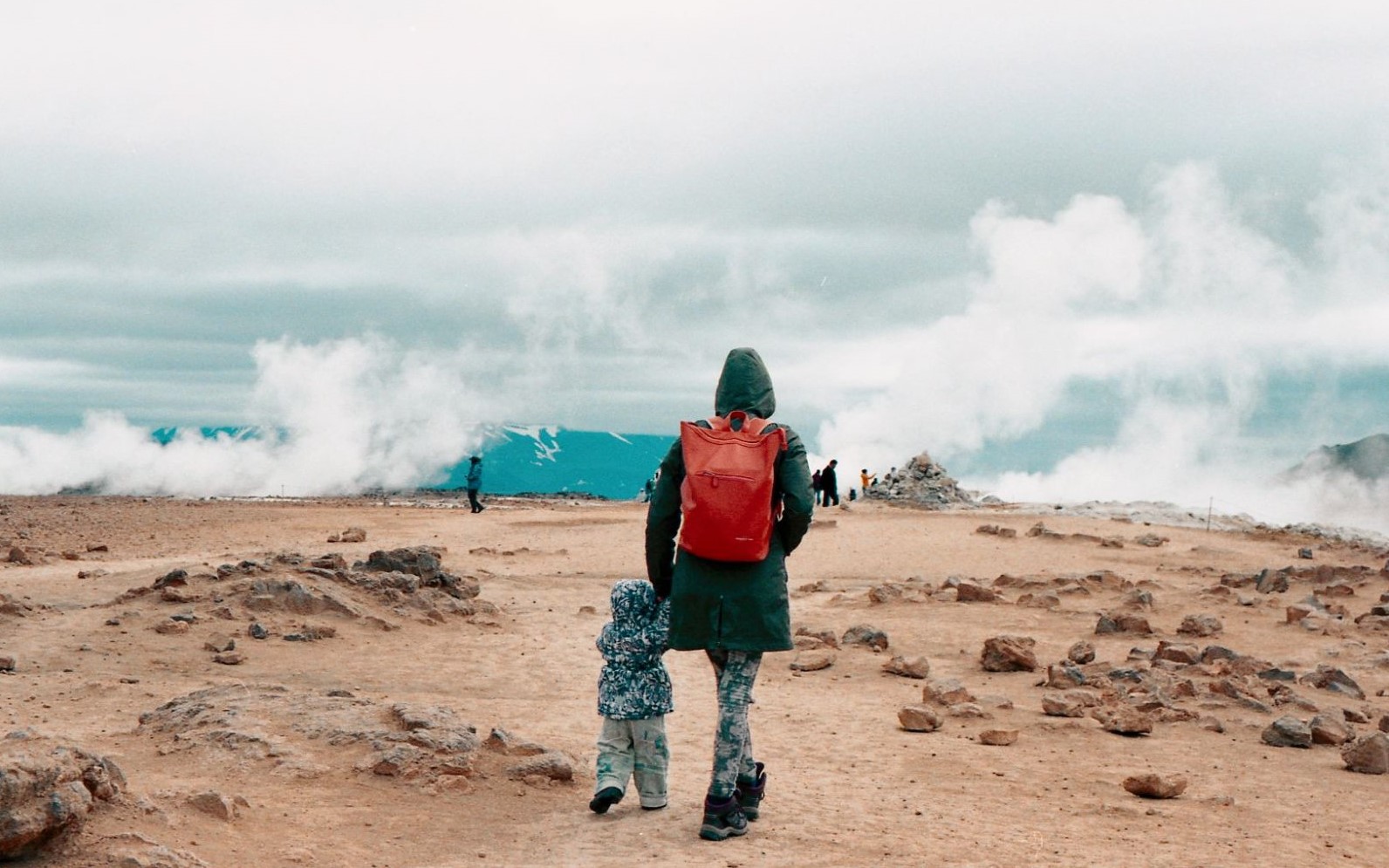 Being close to the lake of Myvatn we decided to make a circle around it with the car – it was nice but we were already getting a bit overwhelmed by everything we’ve seen during this day and were a bit tired to make a stop there, so just admired it from the car.

We wanted to check what are the options for whale watching offered in Husavik, but 75 Euros per person was just too much for our budget and we also taught it might be a too wet and cold experience for our baby girl, so we decided to skip this adventure.

We ended up in the campsite of Heidarbaer and decided to sleep in the car to avoid freezing again.

As we didn’t use our inflatable bed in the car, we woke up all stiff. Luckily, the campsite had an outside swimming pool with hot water and a 40° Jacuzzi for ISK 700 (5 Euros) per person. The weather was getting slightly better and we could stay outside and enjoy the revitalizing water.

Our aim for the day was the canyon Jokulsargljfur and the Detifoss waterfall. For the waterfall we chose the F-road which is more picturesque. 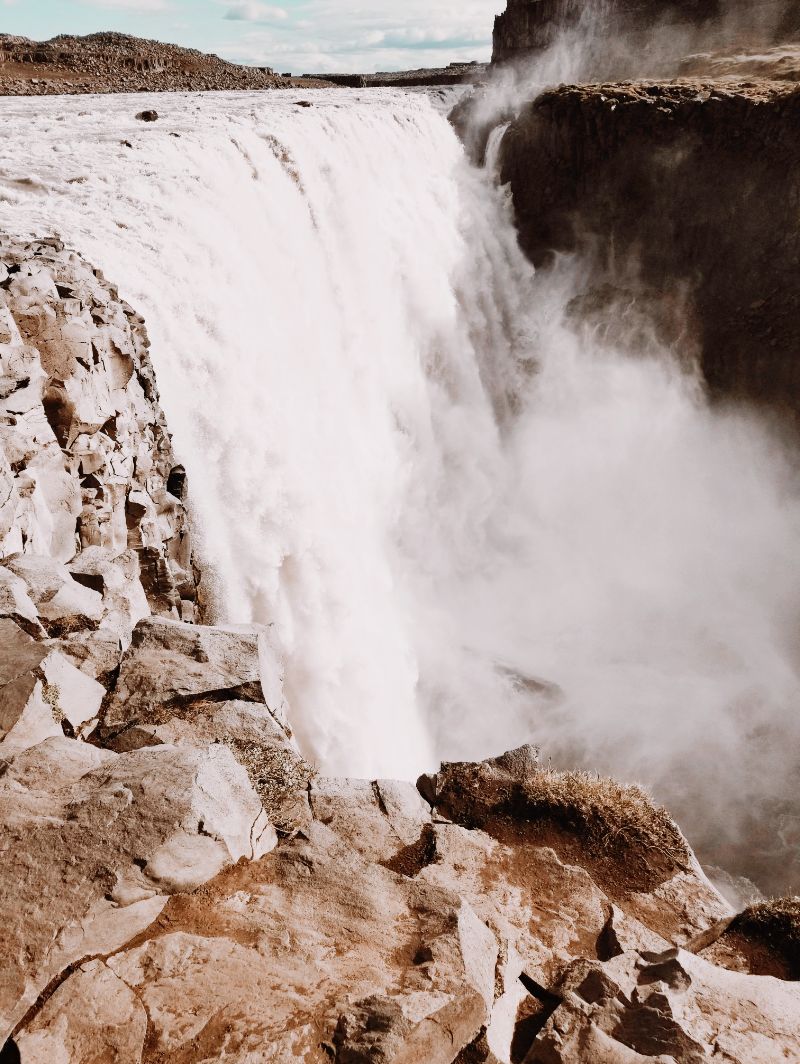 Before reaching the camp we visited the second biggest town on the island – Akureyri, we didn’t pass through the new tunnel, which is paid and you drive only 10-15 km less. In addition, the other road turned out to be much more interesting and beautiful.

The campsite in Dalvik was crowded, with a new modern common space offering plenty of space for cooking and rolling on the floor. So everybody was happy and warm. This time we used the inflatable bed in the car and had a really good and comfortable sleep.

We got up early in order to be able to catch the ferry for Grimsey – the little island crossing the Arctic circle. The ferry tickets were 7000 ISK per person (EUR 50) so rather disappointed we headed to Trollaskagi – the troll peninsula. It was a great decision as thus we managed to see the most beautiful villages on the island with Siglufjordur being my favorite. While we were looking for a place there to drink coffee Ivo remembered seeing this place in some Icelandic series. Then we headed to Hofsos to see the designer outdoor pool. It was astonishing, located on the edge of the cliff, giving the feeling that the pool water flows into the ocean. However, it was a weekend and all the locals were there, so we decided to skip it too. We went to Saudarkrokur to camp. 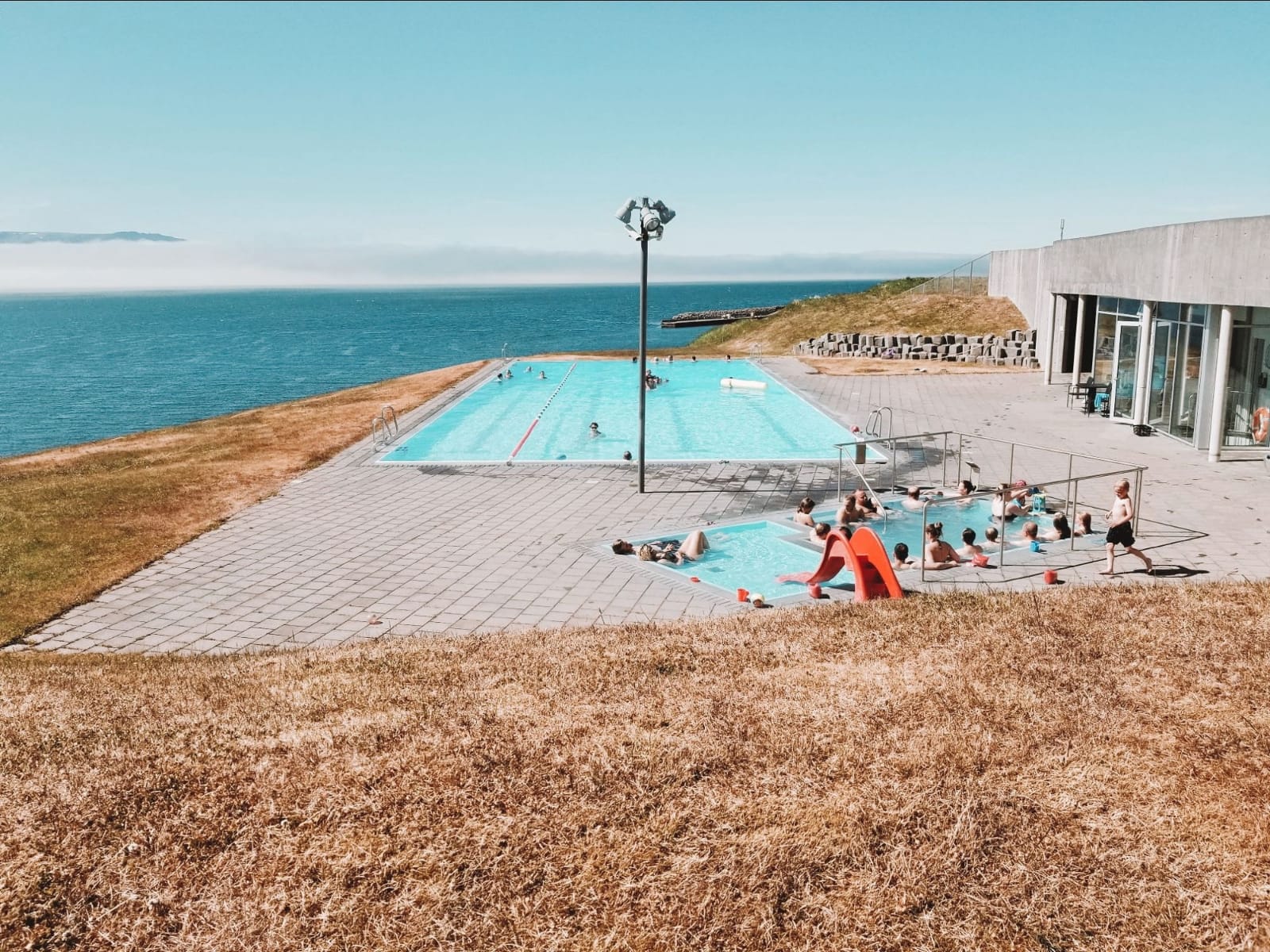 The designer pool in Hofsos

Close to the campsite was the town swimming pool with hot water and an indoor aqua playground where we soaked for an hour. Our initial plan was to see the Westfjords, but the weather forecast for this part of the island was somewhere around 0° for the next couple of days and we didn’t want to freeze anymore so we just headed south in search of good weather.  We stopped to see some waterfalls, got into the common area of a campsite to cook some lunch, enjoyed the swings outside and finally the warm touch of the sun on our faces, while eating outside, which was unthinkable in the North. 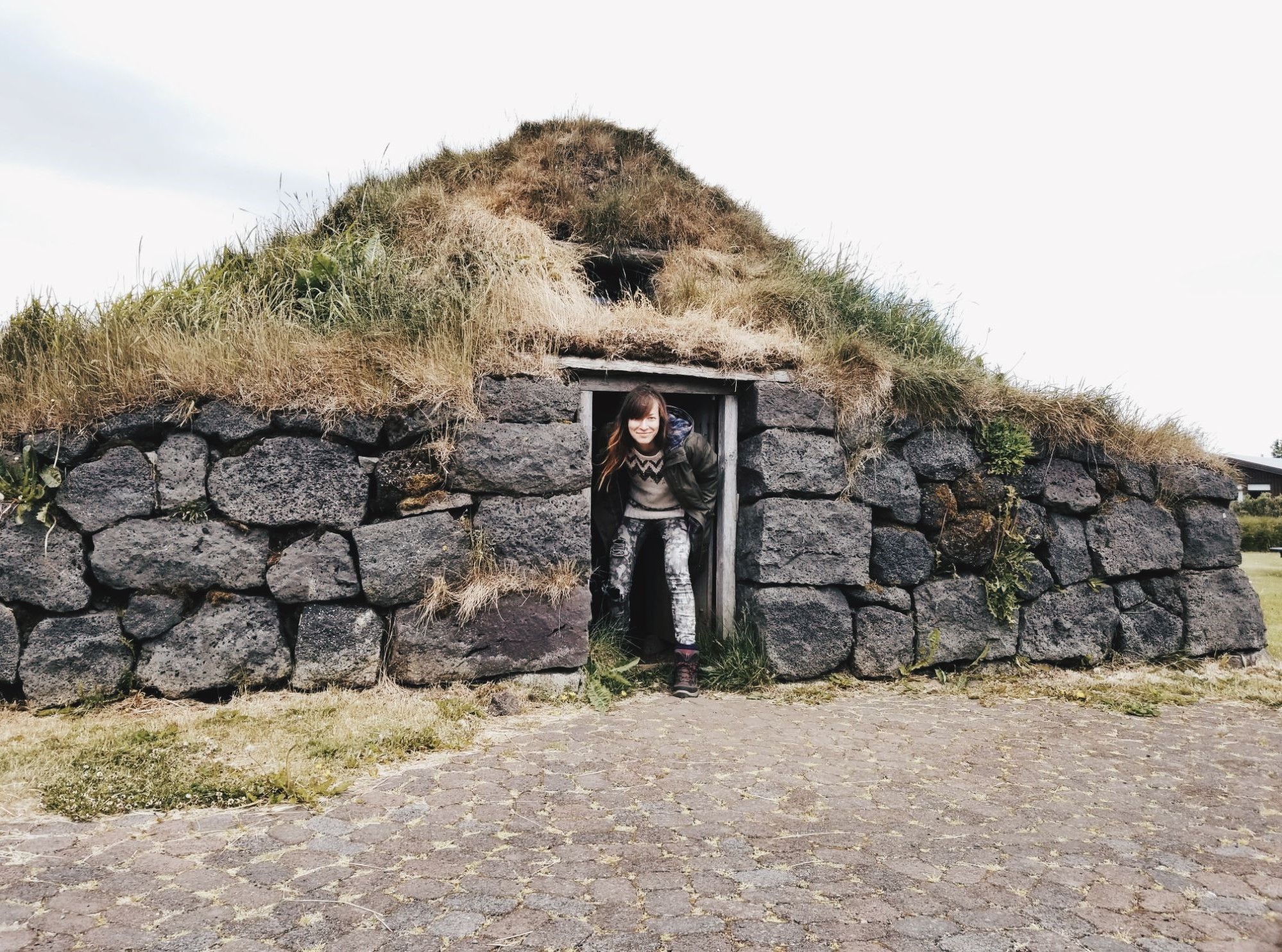 In the turf house

We decided to explore the Snaefellsnes Peninsula, stopped at the town of Stykkisholmur and were most fascinated by its church, located on a hill above the town. It is an example of Iceland’s unique take on modernist architecture. We stopped to take some photos of the the impressive mountain of Kirkjufell and then went further to the west reaching the towns of Olafsvik and Rif. 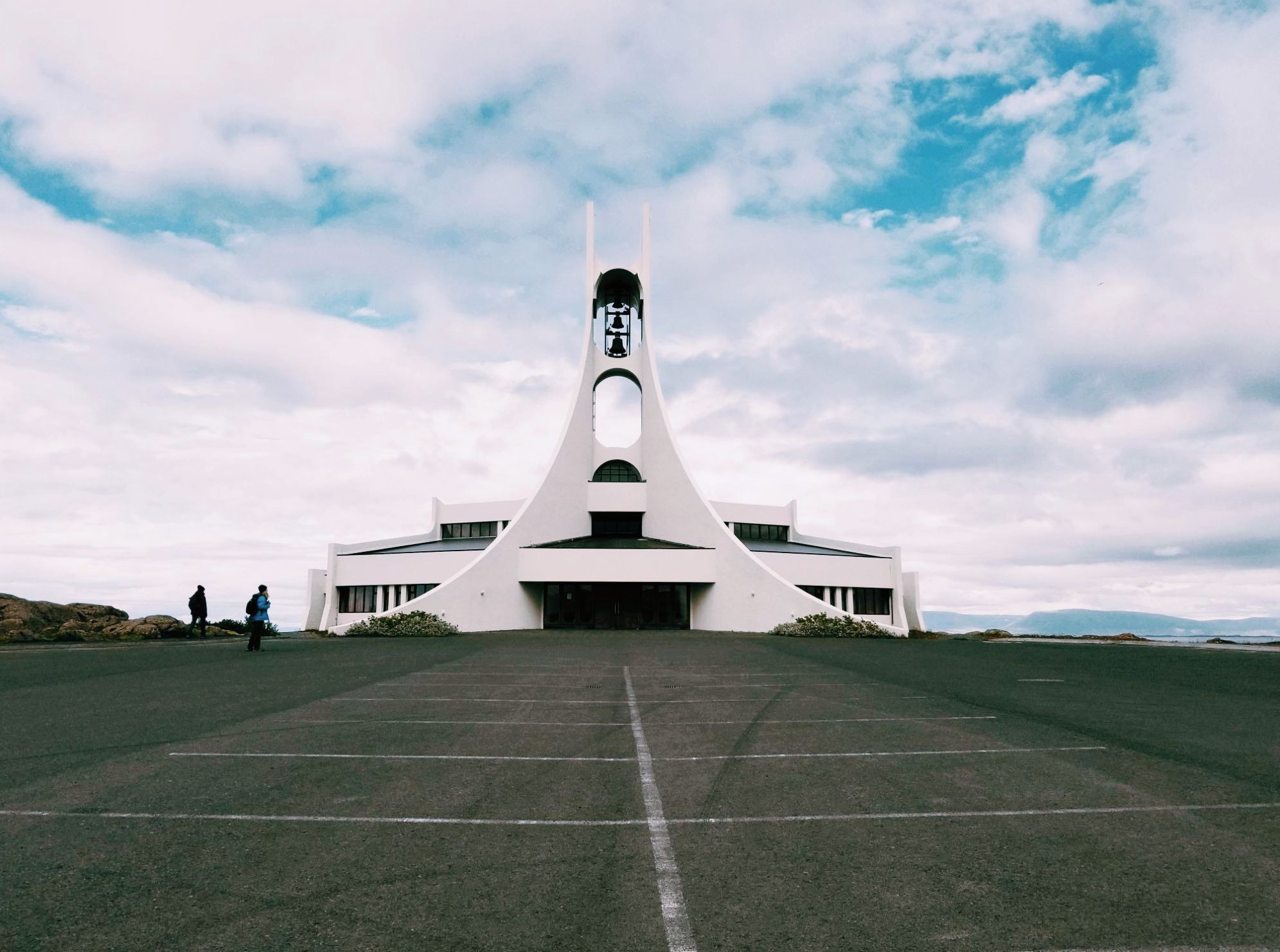 We ended up in the magnificent campsite of Thoristadir, with lake Thoristadavatn in front of us. This campsite had the best common area, with well equipped kitchen, huge dining area and plenty of toys for Reya. We would go and spend at least a few days just there next time.

We liked the place so much that we decided to have a long leisure day there, without thinking of places to visit and driving for long hours. It was the best day we had after my birthday. We talked, cooked, and had a good and well deserved rest. The only place I wanted to see before leaving Iceland was the Reykjadalur hot spring thermal river above Hveragerdi. We had to stop in the town to ask for directions, as it turned out that the road leading to the river is outside of the town. So we parked our car and found out that we have to walk up the hill to reach the river. The weather was nice, people were coming down still in their swimsuits. It took us little less than an hour to reach the river, given that Ivo was carrying our girl, so the pace was slow, as there were slippery stretches. The river was crowded and the best thing was to soak in it with my swimwear on while the people outside were dressed for a cold winter day. This was one of the best experiences in Iceland, totally exceeding our expectations and far better than the Secret Lagoon and most of the swimming pools we’ve been to on the island. It was a great end of a magical trip to the land of fire and ice. 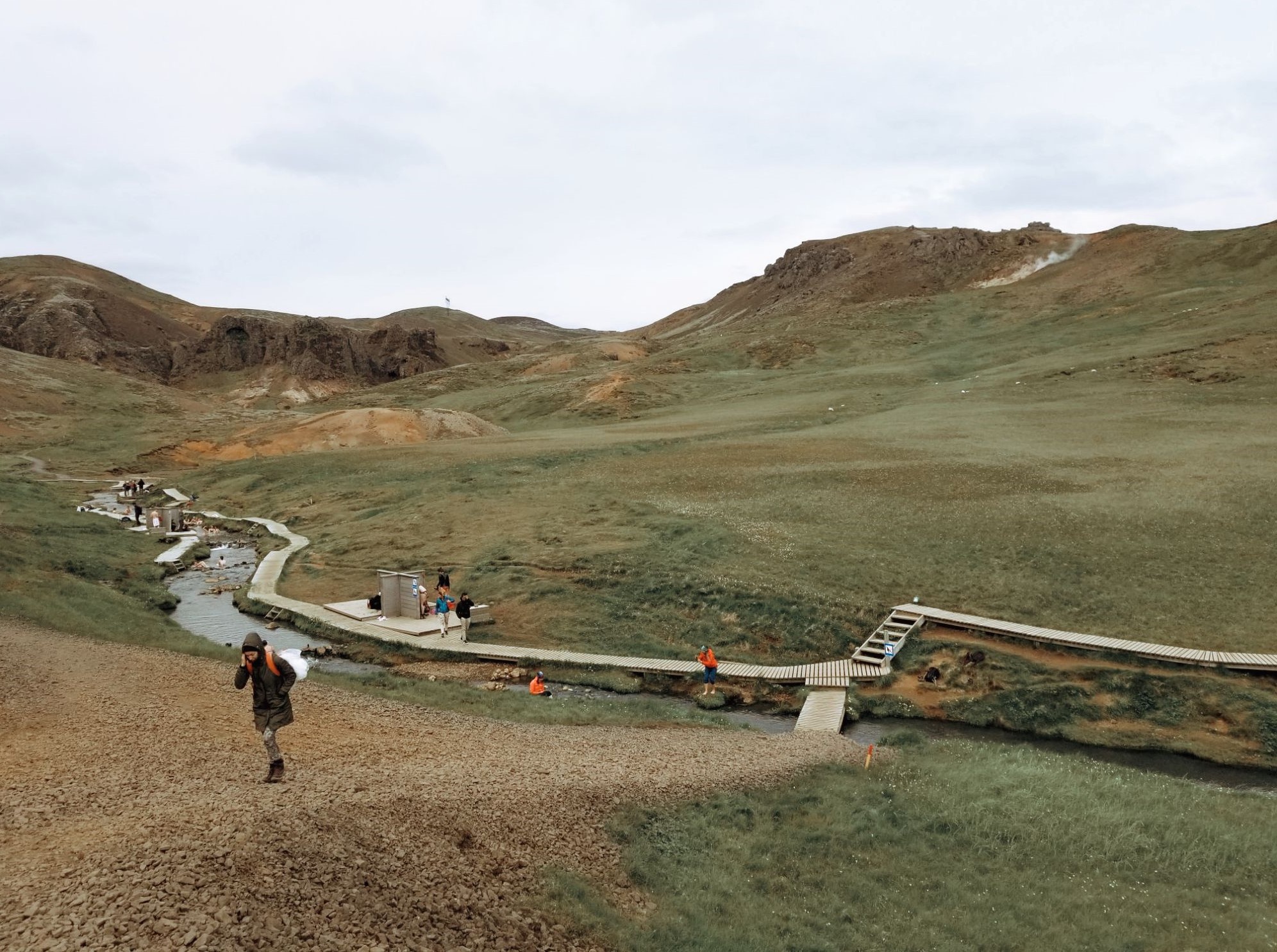 We slept at the Sandgerdi camp near the airport, which was quite convenient as we had our flight very early next morning. 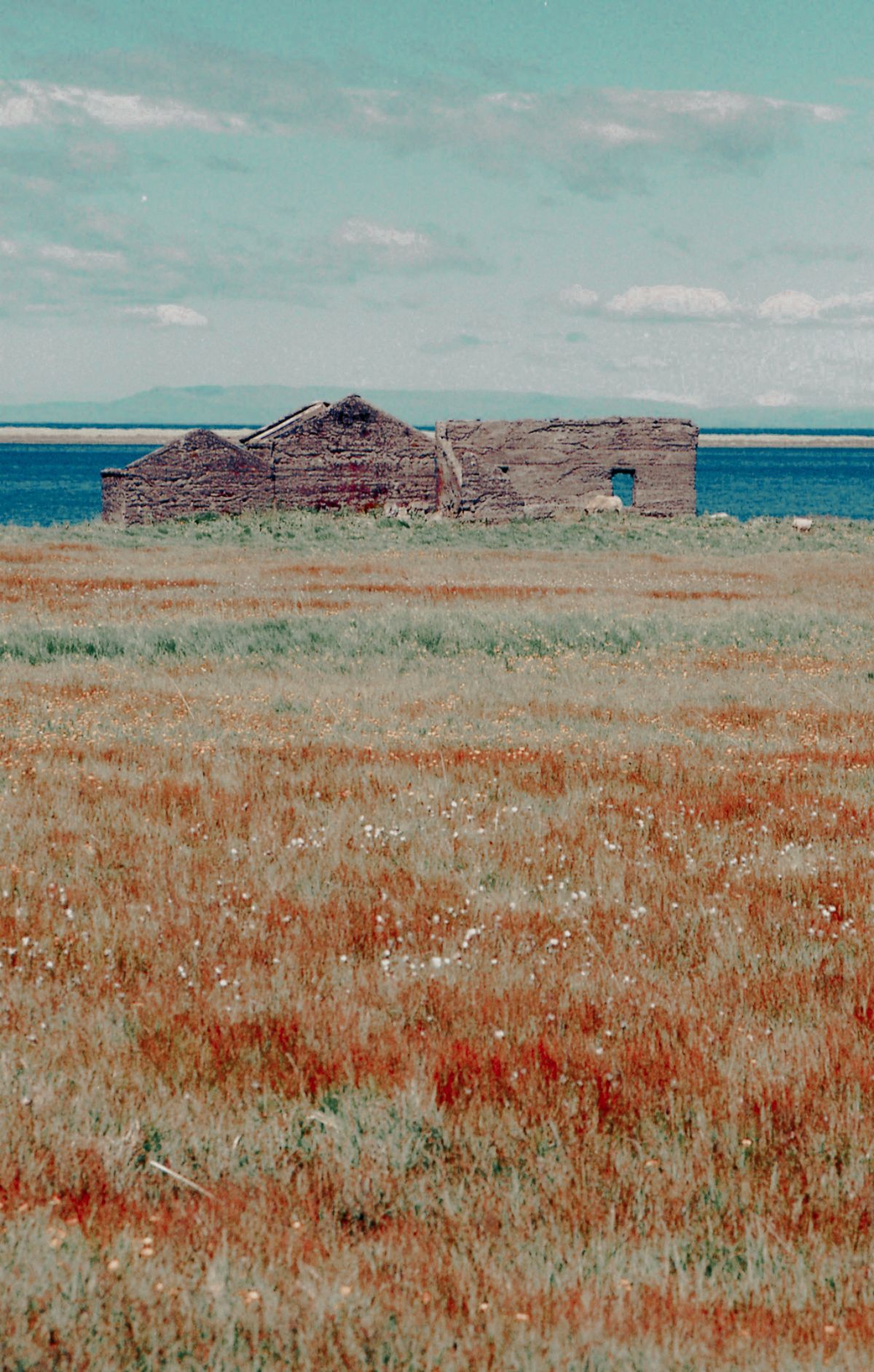 One Week in Santorini