Our second day at Angkor started with visiting the Royal Palace where we made some monkey friends as planned the day before. I was prepared with some bananas in my bag which the monkeys tried to steal. At one point they started jumping and one of them even climbed on me. They didn’t seem aggressive but I would never let this happen now, being aware of all the diseases they carry. They, though, were much calmer than the monkeys we have seen in India, and much friendlier. 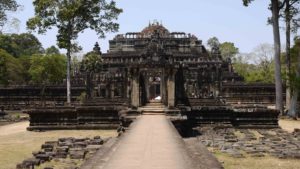 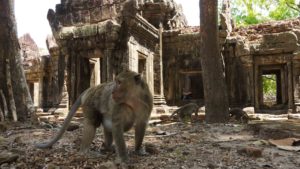 We then saw the Elephant Terrace and Lepper King Terrace and continued with Preah Khan. The latter is left largely unrestored like the nearby Ta Prohm and you can see here once again giant trees growing among the ruins. 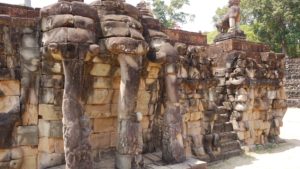 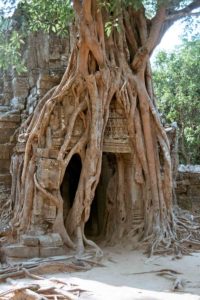 We also explored Bapuon, Tep Pranam, Preah Pithu, Sour Prat Towers, The Khleangs and Banteay Kdei about which I will not go into detail.

Probably the most memorable from our second day at Angkor were the two temples we visited at sunset. We were already completely exhausted by the heat and by everything we had to absorb as information so far. Those two last temples, however, were the perfect ending of this amazing day. The first one is Pre Rup and the second – East Mebon. Both of them are a bit older than most of the other sites at Angkor and have a noticeably warmer stone color. Even the structure of the stone looks different. They also seem to be somehow more distant from the other temples or at least this was the feeling I got. There were no people selling stuff around and we didn’t have this touristic feeling about the place which made it great. 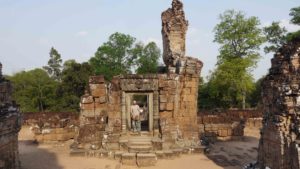 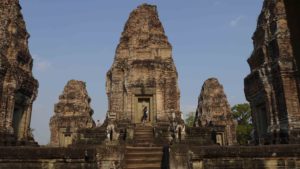 FIND OUT WHAT WE SAW ON OUR THIRD DAY IN ANGKOR HERE.