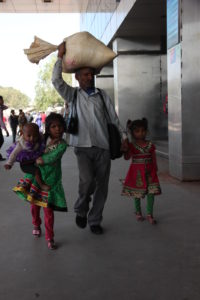 On our third day in Delhi we went to the train station to buy tickets to Agra. The place is infamous for its tourist scams so we were very cautious. We went to the ticket desk to get some information but this turned into mission impossible. After trying to explain with words and gestures to the man working at the desk a guy came and asked us to follow him. He brought us to a room on the second floor of the station where it was full of backpackers. It was obviously a special department for foreigners. We then waited for an hour only to find out that we need to go downstairs again and buy the tickets for the next train to Agra. At least now we had the train number on a piece of paper. We decided to go for moderately expensive class and not, as initially planned, for the cheapest. We changed our mind after passing by one such carriage which had no windows, only metal bars and the people inside looked like imprisoned. It looked extremely dirty and the smell that drifted from it made me feel sick. With just a glance Ivo and me knew we were not spending the next 3-4 hours in one of those carriages. So we paid much more on the tickets than planned but it was totally worth it.

Since we missed the early train we had to wait for about two hours for the next one and as we had our heavy backpacks with us, we couldn’t really walk around much. So we waited in the department for foreigners until it was time to get on the train. If you haven’t booked tickets in advance, my advice would be to check the schedule and book for the earlier trains instead of spending half of your day at the train station like we did. 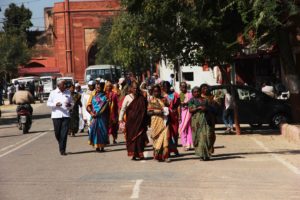 The Road Leading to the Taj 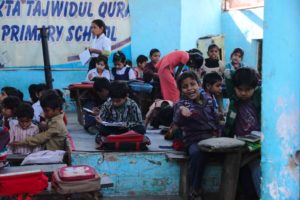 A Classroom in Agra

We arrived in Agra at dawn and took a tuk-tuk to our hostel. Although we showed the driver the address on a piece of paper he was not really sure where it was. We stopped a few times so that he could ask different people for direction. We were making circles for some time when I decided to stop a guy and ask for help. We then had to ask again and after stopping for the 6th or 7th time we finally reached the place. We checked in and wanted to go for a walk in the center but were advised by the guy on the reception not to go in this direction when its dark because Agra is infamous for its high rape crime rates. So we went to the closest possible place to eat and got back to the hostel.

On the next day we decided to walk to the Taj Mahal as it was not that far and it was a really pleasant walk. On our way to the mausoleum we saw a place full of kids, dressed neatly who were writing in some notebooks. We stopped to take pictures of them and it turned out this was a school. We met the principle who showed Ivo some photos and explained a bit about the school. 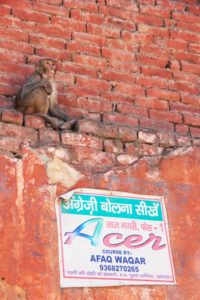 Just chillin while looking for some food to steal

This was a very lively area with some small streets, a lot of traffic, noise and..monkeys. They were watching the hustle and bustle from the roofs of the buildings, walking on the wires above our heads and looking for some food to steal.

We soon arived at the main entrance of the Tadj Mahal, went to the ticket counter and bought our tickets – 750 rupees each ( 10 euro). We waited in a queue for about 15-20 minutes and then entered into the complex. In two minutes we were standing in front of my childhood’s dream – the tomb with its beautiful white marble was shining on the sun, it was mesmerizing. The place, of course, was crowded, people were taking pictures everywhere, so we started walking towards the tomb and while I was sitting on a marble bench in front of the tomb I heard that the old couple I was sharing the bench with, were talking in Bulgarian. Well, the world really is a small place. 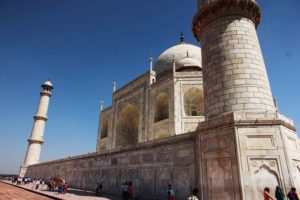 The Taj Mahal was commissioned by the Mughal emperor Shah Jahan to be built in memory of his wife Mumtaz Mahal, a Muslim Persian princess, who died giving birth to their 14th child. Soon after the completion of Taj Mahal, Shah Jahan was put under house arrest at nearby Agra Fort by his own son. From there he had a view to his Taj and this was almost everything he could see during the last years of his life. 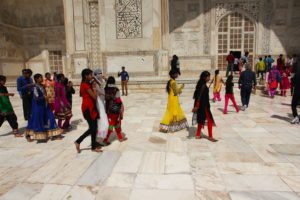 Walking Barefoot on the Warm Marble 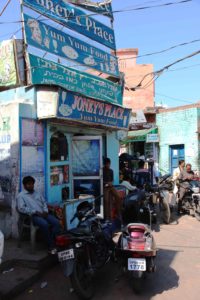 When we exited the Tadj we were already starving so we decided to look for a place to eat. I had checked the recommended restaurants in our guidebook and while we were passing by the school I’ve already mentioned, I saw a big blue sign ‘Joney’s Place’ on top of a small building. This sounded familiar so I started looking for it in the guidebook and found it among the top places to eat in Agra. Well, on the outside it looked daunting. It looked extremely dirty (as did most of the places in the neighborhood) and when I told Ivo we should check it he said he is not eating there. He agreed at least to look inside and when we opened the door we saw it was a really tiny restaurant with five small tables, 4 of which were occupied by foreigners. This is always a good sign when you are looking for a clean place to eat in India so we decided to stay. One of the guys working there wanted to take our order and when he saw how hesitant we were, he gave us a notebook with reviews from visitors, most of them in English and all of them recommending certain meals. We could also see such “reviews” on the walls – they were all covered with drawings, names of people who were praising the place as one of the best in India 🙂 Here is where we drank our first lassi, after a couple sitting on table next to ours assured us it is prepared with bottled water. It was delicious, like everything else we tried there. I highly recommend the place!

After we had a rest and since our stomachs were full, we happily headed to Agra Fort. We actually had to go back to the Taj Mahal and walk down a street to the fort. It took us less than one hour to reach the ticket counter and buy our 250 rupee tickets. 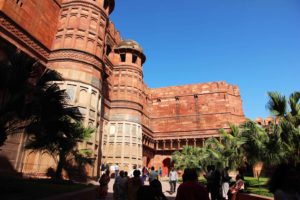 The fort was in ruined condition when Akbar made it his capital and rebuilt it with red sandstone. His grandson, Shah Jahan, who tended to prefer white marble, destroyed some of the earlier buildings inside and replaced them with new marble ones. He was the one who built the Taj Mahal in memory of his wife. At the end of his life Shah Jahan was deposed and imprisoned in the fort where he had a view of his marble jewel – the Taj. 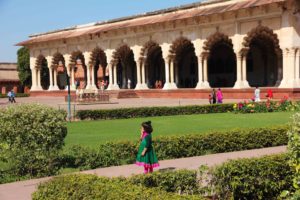 Agra Fort comprises the Jahangir Palace, the Khas Mahal, audience halls, such as the Diwan-i-Khas, and two mosques. It is located on the right bank of Yamuna river. While I was enjoying the view to Taj Mahal on one of the terraces I was able to hear a guide explaining about the Black Taj Mahal legend. This mausoleum is said to have been planned to be built on the opposite bank of the Yamuna river with black marble, but Shah Jahan could not complete it as he was deposed. The structure was intended to be his own tomb.

Next was the area around Jama Masjid Mosque where we grabbed something to eat. Instead of stopping a tuk-tuk which to bring us there we decided to try with a cycle rikshaw. This was a huge mistake, we didn’t repeat again during our trip. We were so heavy for the skinny Indian man that he could barely pedal. For me it was heartbreaking. While we were trying to climb a hill Ivo 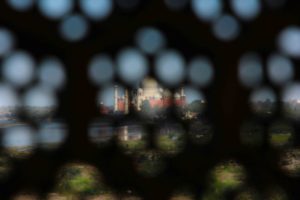 Shah Jahan’s view from Agra Fort where he was imprisoned

just hopped off and walked along with the rikshaw. There are so many people making a living this way in India that in the end I just decided not to think about it in a bad way. This is one of the most important things about India if you don’t want to return from your trip totally depressed – don’t think too much about the social inequality. Because the gap is huge and visible everywhere..

When we returned to the hostel we asked the facility manager to help us book train tickets for the next day to Jaipur. He even paid with his own credit card as the system didn’t accept foreign credit cards. Our train was leaving in the afternoon on the next day so we decided to get up early and go to Akbar’s tomb.

When we woke up we knew where we were going for a breakfast first.

We went to Joney’s place which was packed with people and there were only two free chairs so we asked one couple if we can join their table. They agreed and we talked with them about our journeys, their Holy festival experience and what they were planning to see next. They had just arrived from Udaipur which we were about to visit in a few days so they shared some tips about the place.

After brunch (it was already noon when we left the place) we took a tuk-tuk o Akbar’s tomb and agreed with the driver to wait for us and take us back to our hostel when we exit. The tomb of Akbar, one of the greatest emperors in the history if India, is located in the suburbs of Agra. Akbar himself chose the location of the site and commenced its construction. 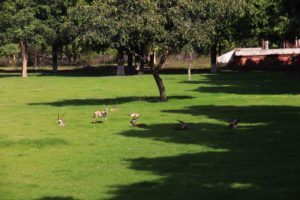 Indian Antelopes in the garden around Akbar’s Tomb

It is beautifully decorated, much more relaxed and less visited then Agra Fort and Taj Mahal. Or at least this is how it seemed when we were there. In the gardens surrounding the tomb you can see peacocks proudly walking around and Indian antelopes resting in the freshly cut grass. Colorful parrots fly around the tomb looking for a place to hide. This was just an awesome way to say goodbye to Agra.

We then picked up our backpacks from the hostel and went to the train station to catch our train to Jaipur. The funny thing was that our names were printed on a piece of paper which was put on the wagon for which our seats were booked. It was a nice and comfortable journey and in a few hours we arrived in Jaipur.