Since the day 2 program was a bit too intense and we tried to see as most temples as possible, we decided to visit some distant temples on our last day at Siem Reap and have a more relaxed day.

So on the third day we headed to Banteay Srei. It lies about 25km of the main group of temples and we actually enjoyed our trip to the temple as much as the temple itself. We passed through some villages where most of the houses were the typical rural Khmer houses on stilts. We could see people sleeping on hammocks tied to the stilts under the house, children playing around or women cooking in the yard. We could even take a quick glance in some of the houses when we were passing by. This didn’t seem to disturb the Khmer people at all – most of the houses didn’t have fences. 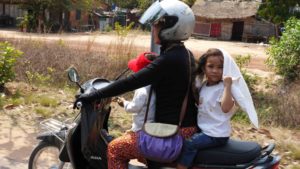 When we arrived at Banteay Srei we were surprised how small it was compared to everything we’ve seen the previous days. It is built of red sandstone and the wall carvings are extremely detailed and very well preserved. The temple is called the “jewel of Khmer art”. Curious fact about Banteay Srei is that it is the only major temple at Angkor not built by a monarch. One of king Rajendravavarman’s counsellors Yajñavarāha was granted the land by the king and together with his younger brother commissioned the temple. It was dedicated to Hindu God Shiva. 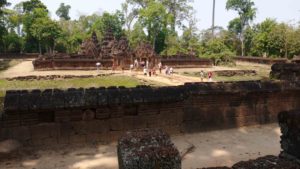 OUR TRIP CONTINUED WITH VISITING PHNOM  PENH AND THE SEASIDE. HERE YOU CAN READ ABOUT IT.

Phnom Penh and Otres beach at the Cambodian seaside