Bergamo, Iseo and Christo’s Floating Piers in a weekend

If you are running out of paid leave balance for the summer, but you feel like spending a couple of days abroad, then here is one idea for a weekend trip to Italy.

As I wanted to go to Iseo lake for Christo’s art project in June, I had to find affordable tickets with a late departure on Friday after work and a late one for coming back on Sunday evening. The only option I was able to find was to fly with Wizzair to Bologna and then come back to Sofia around 1 a.m. on Monday.

I decided to rent a car for the stay and thus reach Bergamo, where a friend of mine and me had booked accommodation. We were also going to need the car to go to Iseo, so for me this was the best option, as we really didn’t want to be dependent on Italian railways as both Lily (my friend) and me have already had some terrible experience with it.

So I arrived around 9 p.m. at Bologna airport and got a free upgrade to a more expensive car than the cheaper one I had initially booked as it was available only as automatic which I refused to take. So without realizing there is a GPS in the car I started driving using a paper map I took from the office of the car rental company. Well, as you can imagine, I got a bit lost, traveled through some villages instead driving on the highway. But I was soo happy to be in Italy and didn’t realize how I arrived in Bergamo. The difficult thing was to find the apartment. I only knew the name of the street and since it was about 1 a.m. and there were no people on the streets I drove until I saw a young guy and an older man sitting outside. I stopped the car and asked for help. They, of course, didn’t speak any English, so with the 5 words I know in Spanish I managed to understand which way I should drive. The place we had booked was absolutely amazing – it had a great location in the heart of the city, we felt very comfortable in it and especially loved the super cute little balcony on which we felt like two sparrows while smoking cigarettes and absorbing the Italian vibe from the street.

On the next day we started exploring the city center and while we were looking for a place to have breakfast we found this cafe full of Italians. At first glance I was not impressed by it, but when we saw that it was packed with locals we were sure we made the right choice. The place is called Arri’s kitchen bar and is located on Via Piccinini 10. It works 7a.m – 9 p.m. We had breakfast with coffee and tea for less than 15 Euros which was a pretty good deal.

After a long breakfast, as expected from two friends who see each other for the first time in months, we were ready to conquer the old town. We were surprised to see that all the people who we didn’t see in the downtown pedestrian zone were actually in the old town. The atmosphere was so relaxed that we couldn’t help but feel that inner piece almost immediately. We entered the old town – Citta Alta through Porta S.Giacommo and after climbing up the hill we reached Piaza Vecchia. We spent some time sitting on the stairs staring at all the tourists, listening to the sound of the guitar of this street musician who was trying to impress these two young butterflies, giggling right next to him.

We then entered the Chapelle Colleoni and were absolutely astonished by its interior. What we saw inside was quite unexpected from the outside – the altar, the frescoes and sculptures were all so impressive.

After walking around in the old town we decided to go back to the center of Bergamo, take the car and drive to Iseo lake in the late afternoon. We exited the old town through Porta di S.Lorenzo and we felt like being in the countryside – small houses, vineyards, birds singing, the distant sound of a small river. We started having doubts whether we were where we actually thought we were while looking at the map. After walking for some time a very kind lady gave us directions to the city center. Apparently we exited the old town through a gate we haven’t even seen on the map. 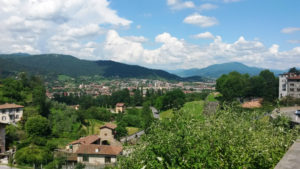 We reached the central train station, where we met our friends Rita,Lidia and Gosh and headed to Iseo. As we were getting closer we were seeing more and more people walking in the same direction. Police officers tried to stop us but with Rita’s press card we managed to park the car in Pilzone, the village before Sulzano – the starting point for those willing to walk on water. We had to walk for about 30-40 minutes to reach Sulzano and once there we were unpleasantly surprised with the fact that the temporary bridge connecting Sulzano with the Isola island in the lake was closed due to the expected light shower. So we took a ferry to go to the island. The whole walking area on the side of the lake was covered with the saffron-colored fabric which was used for the temporary bridges in the lake as well. The streets in Sulzano close to the temporary bridge were also covered with it. Every single corner and specific shape of the street was taken into consideration when preparing the huge pieces of fabric to fit perfectly. It was amazing! We spent the evening on the island, enjoying the company of all friends who were staying there and finally decided to sleep at their place as we feared that we might not be able to reach the lake with the car from Bergamo on the next day.

This was a great decision as on the next day it was a total nightmare to reach Iseo – trains were being stopped, the cars were not let through, etc. So when we woke up early in the morning we were extremely happy to see people walking on the saffron path. We found a place to take some croissants and coffee for breakfast which we enjoyed in the company of some ducks and swans in the lake. Then we had our walk on water. It was so crowded – people at different age, some with baby strollers, others with their dogs, some sitting close to the water and enjoying the view, others heading to the house on the little island which is the heart of the project. A swan couple was walking undisturbed on the bridge while people were forming a circle around it to take a shoot with the beautiful white birds stepping on saffron. We enjoyed a more than an hour walk on the “Floating pierce” and had to then leave so that we are able to catch our flights.

On our way to the car we came across a gallery in a building in the water with the photographs of Jean-Claude and Christo’s art projects taken by Wolfgang Folz.

After reaching Bergamo and packing our luggage we found a great pastry place where we spent about an hour – the Botega caffe cacao, located on Via Zambonate 89. Everything was so delicious there, highly recommended! After this sweet end of the weekend it was time to catch our flights (I had to drive to Bologna first).

This was an amazing weekend so if you wonder how to spend a couple of days in Italy without taking too many days off – this is an easy way to escape from the routine.