We spent 2 weeks travelling around Morocco and we enjoyed the variety of this country a lot. So if you want to plan your own trip, I hope our itinerary can give you some ideas.

Arrive in Fez. Bus from airport to the train station. From there taxi to the bus station located near the walls of the medina (there is another CTM bus station south of the new town). We bought tickets (50 Dirham) for the evening bus to Dardara leaving around 9.30 p.m. So we left our luggage in the luggage department at the bus station and spent a few hours in the medina.
The bus to Dardara dropped us near a restaurant on the road where we took a taxi to the medina in Chefchaouen for 60 Dirham. We arrived in the medina around 3 a.m. and had some trouble finding the riad where we were about to stay at. Luckily there was a group of young guys walking around who offered some help and took us to the riad. Without their help it would had been impossible to find it in the maze-like empty blue medina, where everything looked the same.
The last bus from Fez going directly to Chefchaouen leaves around 3 p.m. from the CTM bus station. If you miss it you can take one of the taxis waiting in front of the bus station. This will cost you not less than USD 50. Since this was exceeding our budget we looked for another option and after more than 1h of going here and there and asking different people, we were told about the late bus to Dardara.

We spent the day in the beautiful blue medina of Chefchaouen, taking so many photos and getting countless offers for hash. In the late afternoon we walked to the bus station and bought tickets for the afternoon bus back to Fez leaving on the next day. Spending the evening at the Plaza Uta el-Hammam together with the locals was the perfect ending of the day.

We had a walk up the hill till we reached the walls of the medina. Then we enjoyed a nice lunch in Beldi Bab Ssour restaurant – highly recommend this place for its delicious dishes at very good prices. Then we took the bus to Fez where we arrived in the evening. The medina there is much bigger than the one in Chefchaouen and it is really tricky to find your riad there without any help. If you ask someone for help, then expect to be charged for the service.

We spent the whole day walking around in the medina. 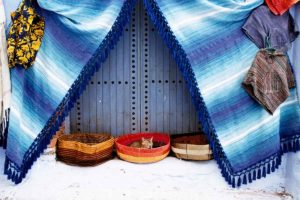 The beautiful blue medina of Chefchaouen

We went to the train station from where we took the train to Meknes (22 Dirham per person), then we went to the French Institute where we took a shared taxi to Moulay Idriss (10 Dirham per person) Keep in mind that you will be travelling 7 people most probably in a big old Mercedes, which means that the back seat is shared between 4 people and the front one next to the driver – between two people. It is not such a long drive, so it is bearable, but at first we thought the driver was joking when he made the 4 of us sit at the back. When we arrived at Moulay Idriss the weather was somewhat grumpy so we decided to head to Volubilis – the ancient Roman time just a few km away from Moulay Idriss. We took a taxi to the site and paid 30 Dirham for it.
Volubilis is the best preserved archeological site in Morocco and is most famous for its well preserved mosaics which are really impressive. We didn’t have luck with the weather which got really stormy once we were at the site. So after visiting it we shared a taxi with another couple back to Meknes (75 Dirham for the two of us) and from there took the train back to Fez.

The weather was much better than the previous day so we once again went to Moulay Idriss where we spent the first half of the day. This is one of the country’s most important pilgrimage sites and until mid-20th century non-muslims were not allowed to stay there overnight. Now it is a very relaxed town with astonishing view, once you climb up the narrow streets of its medina. This way you can also have a look in the yard of the big mosque, which non-muslims are not allowed to enter.
The second half of the day we dedicated to Meknes where we wanted to see the mausoleum of Moulay Ismail, but unfortunately it turned out it was closed for renovations for two years. So we decided to check the medina – honestly, the ugliest one of all medinas we saw in Morocco. All in all, the imperial city of Meknes was rather disappointing and we quickly went back to Fez to enjoy the evening there. 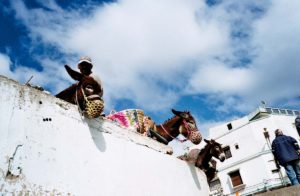 Around noon we took the train to Marrakesh (206 Dirham per person) and in 8h we arrived at the fancy train station of Marrakesh. We took a taxi to the medina, had dinner and went to a hostel where we spent the night.

Early in the morning we were picked up for our desert trip to Merzouga. We travelled through the High Atlas mountains via Tizi-n-Tichka pass at an elevation of 2260m. Then we visited Ait Benhaddou, the lush valley in Skoura and then slept in a gorgeus hotel with a beautiful view and a swimming pool with freezingly cold water.

On the next morning we visited the canyon of Todgha Gorge and then headed to Merzouga where our 2h camel trek started. We reached the barber camp before sunset so we climbed a very high sanddune to enjoy it.
This is where I booked the tour and all in all we were very satisfied with our choice: 3 Day Desert Tour 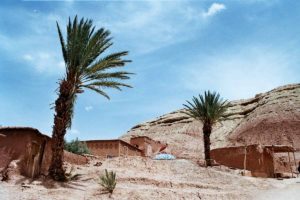 We started riding the camels at dark and after one hour the sun rose in front of us in the quiet desert. An experience of a lifetime! The trip from the desert back to Marrakesh was very long – it took us more than 10 hours with just a few quick stops for rest to reach our destination. We arrived in Marrakesh in the evening, checked in at the riad and went for a walk around Djemaa El-Fna, the city’s main square bustling with musicians, snake charmers, henna tattoo artists, a lot of food and fresh juices.

We decided to go and see the famous Jardin Majorelle – a stunning oasis outside of the tourist area, built for the French painter Jacques Majorelle and after his death acquired by Yves Saint Laurent and his partner. The entrance fee for the garden is 70 Dirham and for the Berber museum – 30 Dirham. I think paying for both is worth it, as there is a beautiful collection of jewelry , leatherwork, textiles, etc.

Our initial plan was to make a day trip to Essaouira, it takes 2:45h with the bus and the ticket costs 80 Dirham. But we were getting a bit tired of all this travelling so we decided to just have a relaxed day of walking in the medina in Marrakesh. We went to the El Badi Palace and Bahia Palace – both worth seing. 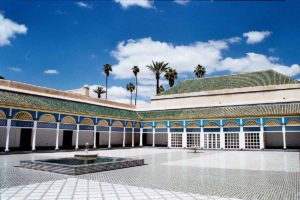 We took the train to Rabat, stayed in a guesthouse in Sale (another town which now is turning into part of Rabat), which now has a convenient tram connection to the center of the capital within less than 10 minutes and so we were able to visit the medinas in both Sale and Rabat. We also watched the sunset from a huge terrace in the old town.

We had our flight back home late in the evening so we had a whole day to further explore Rabat. We first went to the Mausoleum of Mohammed V and then headed to the new Museum for modern and contemporary art. There were some very interesting pieces, especially the temporary exhibition on the ground floor. They were preparing a Picasso exhibition, so check the museum’s program and if you are lucky you might visit an interesting exhibition.