I have to admit that I hadn’t made a proper research prior to arriving in Cambodia and was totally unaware of the area the whole temple complex of Angkor covers. This affected the way we spent the first day in the temples. I first want to mention that at the hotel reception we were offered the services of a tuk-tuk driver. We accepted the offer and asked if he could wait for us in front of the hotel around 10h on the next day. After having a breakfast of thoroughly cooked food and drinking our daily dose of probiotics we were ready to make a dream come true.

Our driver turned out to be an English teacher and we were able to talk with him about the history of the country as well as the current situation, which was pure luck. He drove us to the main entrance on the road to Angkor Wat where we bought our three-day Angkor Pass. Its price was USD40. There are also one-day pass you can get for USD20 and a weekly pass which costs USD60. We then drove a bit more and reached the Angkor Wat. There were a lot of people trying to sell stuff and I saw a very useful guidebook to the temples which I highly recommend if you are travelling without a guide. The book is very well structured, has very good photos of the temples, information about them and can help a lot to prioritize (especially if you have only three days to explore the temples, as we did). Our driver bargained with the people for it and with his help we managed to buy it at a reasonable price. 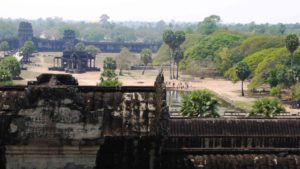 Angkor Wat From Above

It was already super hot when we started walking towards the temple on the  sandstone causeway  and in not more than 5 minutes we were desperately looking for a shadow as our heads started roasting. Here I should note that this temple might not be best to explore at this time of the day since you have to walk on the sandstone causeway over the moat that surrounds Angkor Wat and then walk some more to reach the towers. And all this without any shadow to hide from the sun. 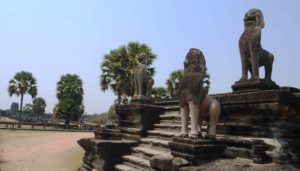 All the heat was nothing compared to the feeling of exploring the largest religious monument in the world constructed in the 12th century. It is also the best preserved one and considered to be an architectural masterpiece. 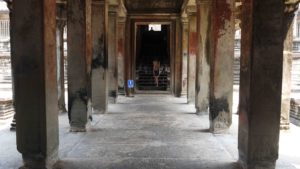 Angkor Wat is a miniature replica of the universe in stone and represents an earthly model of the cosmic world. The central tower rises from the center of the monument symbolizing the mythical mountain, Meru, situated at the center of the             universe. Its five towers correspond to the peaks of Meru. The outer wall corresponds to the mountains at the edge of the world, and the surrounding moat the oceans beyond. 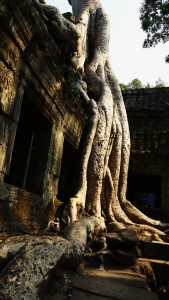 As I already mentioned we were totally unaware of the number of temples we could potentially explore and spent hours at Angkor Wat. Our tuk-tuk driver was waiting for us at the entrance. We then had to decide where to head to and I opened the guide we just bought in order to find the temple with the giant trees I have once seen photo of and which were the reason we were in Cambodia at first place. When I asked the driver about them he just nodded and in a couple of minutes we were there. For me this is one of the most amazing parts of the whole temple complex. The trees growing out of the ruins make you feel like you are on the set of an alien movie. They actually “hold” the ruins as they are blended into the walls and if they die, the temple might collapse. The place is absolutely surreal and is one of the most popular temple so be prepared to share the moment with a huge number of other tourists. It was founded by the Khmer King Jayavarman VII as a Buddhist monastery and university. It is in UNESCO’s World Heritage List. 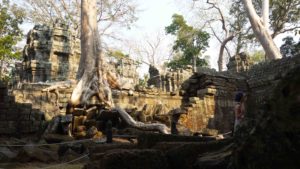 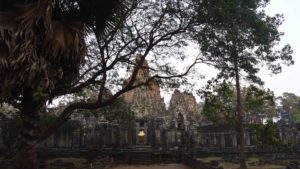 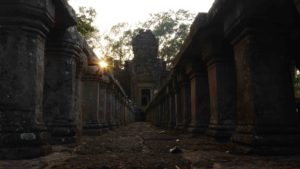 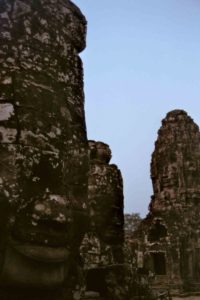 It was starting to get dark when we reached our last destination for the day – Bayon. Our driver warned us that we need to hurry because you are not allowed to access the temples when it is dark. This was a great experience, because it was only us and another two guys who were just walking around and repeating oh wow in every couple of minutes. This was the official state temple of King Jayavarman’s capital, Angkor Thom. Its most distinctive feature are the stone faces which gently smile at you. Angkor Thom was the last capital city of the Khmer empire and the Bayon is situated at its center.

We left at dark and on our way back saw a woman feeding monkeys with bananas. This was the first time I saw monkeys walking around like this and decided to pack at least half a kilo of bananas in my bag on the next day and make some monkey friends J Our driver took us to a nice clean place to eat in the center of Siem Reap and agreed to wait for us in front of the hotel early next morning.

HERE YOU CAN CHECK OUT ITINERARY FOR THE NEXT DAY: Angkor day 2