We arrived in Myanmar by plane from Bangkok. After spending some time planning the trip we decided to skip Yangon, as we didn’t have time for all destinations from the so called big 4 – Yangon, Mandalay, Bagan and Inle lake. Since the last two are a must, we had to choose between Yangon and Mandalay. From what I read most of the people preferred much more Mandalay and also it is much closer to both Bagan and Inle lake. So it was rather easy to come to a decision. 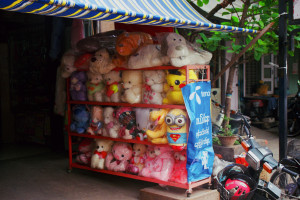 The flight from Bangkok takes approximately two hours. We arrived at the airport where we exchanged some of our Dollars for the local Kyats. This was the best exchange rate we found during our stay in the country. So my advice will be to change all your Dollars there instead of waiting to go to the city and find a better rate – the chances to find such are rather poor.  You need to keep in mind that bills that are not perfect – not looking like brand new, might not be accepted or might be exchanged at a lower rate. Also, larger bills ($50 and $100) are exchanged at a slightly higher rate.

There are many companies offering transport from the airport to the city and the cheapest one is the shared minivan offered by Shwe Nan San Minibus Company. The price per person is 3000 Kyat and they leave you in front of the hotel. 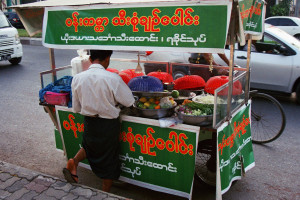 After checking in we went out to look for a place to eat. We were provided with the funniest city map ever! Mandalay’s streets are numbers which was quite convenient for us when we were looking for a certain restaurant for instance. We just had to look for let’s say the corner of 23rd and 79th. Distances are huge and the streets are quite dusty. For us the best time to just walk around was late in the evening when there was almost no traffic. 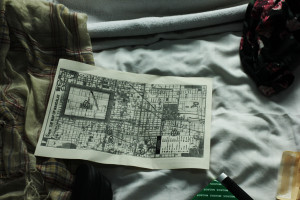 We went to Aye-Myit-Tar located on 81st street, between 36th and 37th – a good restaurant, slightly more expensive than the ones we tried afterwards, but still worth it.

We then wanted to go to the palace and in front of the restaurant a very nice guy with a bike with two seats offered us a ride. As we had some very bad experience with one other guy with such bike in India, who I thought would not survive until he takes us to the destination, I was not willing a similar thing to happen once again. The guy, however, assured us there will be no problem for him, although we said we will be too heavy. We then agreed and asked him to drive to the palace. He was chatting with Ivo during the whole ride while I was taking pictures. I was sitting at the back facing the cars, scooters and bikes behind us and could see how curious everybody was – people were waving and smiling. They seemed to be so welcoming and warm. 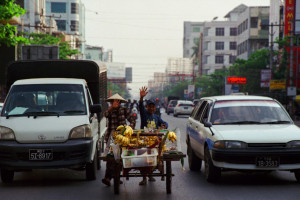 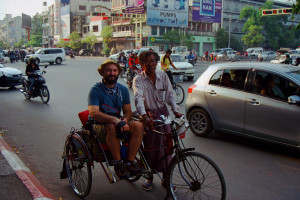 When we arrived near the palace we saw it was situated inside a walled fort surrounded by a moat. Unfortunately, it was around 5p.m. and it was already closed. The fort is huge – we walked the moat for more than 30 minutes without even making a turn and we were about half way to its end.

As we wanted to see the sunset from Mandalay hill we tried stopping some of the people with scooters on the street – two guys took us to the hill for 1000 Kyat per person. We then found out we had to take our shoes off before entering. It looked very dirty and I therefore decided to go with my socks on. There are stairways leading all the way up the hill which I think is the best way to reach the pagoda at the summit. There is also a road leading to an escalator which is a good option for people who are not able to climb the stairways. A number of terraces make you think you have reached the summit, but once you are there you know for sure this is the final destination. We were not let to enter it with socks and later in Bagan we also had to be barefoot when visiting the temples.  The entrance fee for the summit is 1000 Kyat. It was almost impossible to see the city due to the heavy smog down there. At least we saw Irrawaddy River on which we were going to sail to Bagan on the next day. 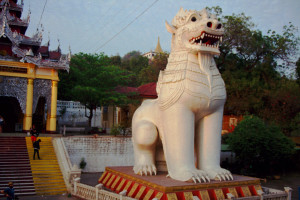 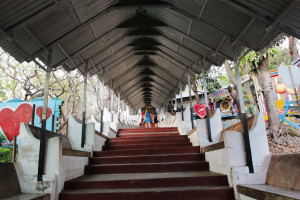 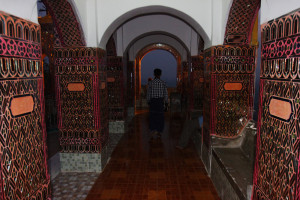 When the sun sank it was great to spend some time just relaxing on the stone benches close to the summit. On our way back to the hotel we passed by the Kuthodaw Pagoda and Sandamuni Pagoda. Apparently it is a Burmese thing to light the pagodas colorfully which reminds you of the Christmas decoration on the streets in Europe. 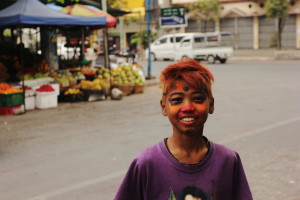 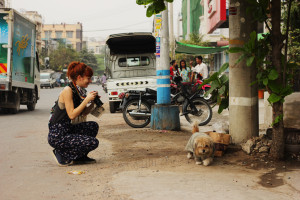 We bargained a downtown ride with a scooter and went to an Indian restaurant called Pan Cherry for dinner. It is located on 81st street between 26th and 27th. The place is cheap and the food tasty. By ordering a curry you get a number of side dishes and as much rice as you can eat.

On our way back to the hotel we looked for a shop where we could buy beer and a very kind lady took us to a small one. It looked more like a small shed with 5 men at a different age sitting inside and watching TV. Some of them were sitting on top of the table and playing a game with bottle caps. From the ceiling were hanging all kinds of packed snacks and apparently I was way too tall, because I had to bend over in order to be able to move inside without hitting the snack with my head.

With a couple of beers in our bag we happily headed to the hotel. It was already late and there were almost no people on the streets. We could take a look inside the houses of the richer people. The funny thing was that on the first floor they all looked similar – a big TV, a sofa and..a car parked inside next to the sofa. Obviously for them the car was part of the home interior and they were really proud with it. We could also see the homes of the poorer people – their doors were open and the living room was on the same level as the street so we could almost get inside. Most of the families we saw were having dinner together on the floor and there was almost no furniture. The little they had inside seemed very dusty as they most probably keep the doors and windows open during the day and nothing can stop the dirt from the vehicles get inside. We really wanted to take photos, but felt it would be too intrusive.  This evening walk was the most interesting and pleasant part of our stay in Mandalay as we could get closer to the life of locals and have a glance at their private space.