We arrived at the bus station in Nyaung Shwe around 4:30 a.m. after a 9 hour journey with the bus from Bagan. More about transportation from Bagan to Inle Lake you can read in my post here: http://lessthan10days.com/2016/03/12/travel-from-bagan-to-inle-lake/ 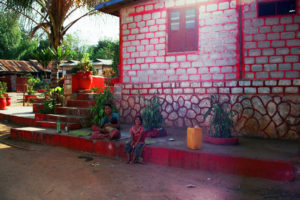 There were two minivans parked at the station, waiting for the tourists and locals to arrive. I had checked the distance between the bus station and the place we were staying at and I knew it is about 2km so when they asked us to pay 4000 Kyat per person I told Ivo this is way too much. The other tourists and the locals hopped on without discussing the price. We waited for the first minivan to leave and then asked the driver of the second one about the price once again. His minivan was full only with local people and when he saw we were not going to pay the high price he initially requested, he agreed to give us a lift for 2000 Kyat per person. The young girls we were sharing the minivan with were very curious, looking at us all the time and giggling during the whole ride. 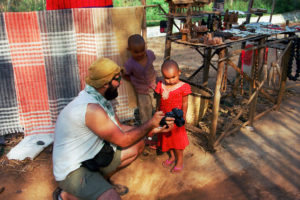 In about 10 minutes we arrived in front of the so called resort where we had booked a bungalow. It was the worst place we stayed at in Myanmar, the room was really cold and there was no hot water in the bathroom. So I went to bed freezing from the air-conditioning in the bus and hoped I won’t have a cold on the next morning. Overall, the temperature around Inle Lake is somewhat lower than this in Bagan or Mandalay, especially in the evenings so we had to adjust very fast. Before going to bed we spoke with the guy at the reception to arrange a boat for us for the next day. We agreed that the boatman will wait for us at 9:30 at the reception and that we will have to pay him 20000 Kyat for the service.

On the next day we woke up and after breakfast took two of the bikes in the resort and cycled through the city following the boatman who was driving a scooter in front of us, showing us the way. It was a great morning with a clear sky and birds singing throughout the whole way to the river. Our destination was a house where the owner of the boats showed us a map with all the sights we were about to visit. He also mentioned several more distant ones and told us we need to pay extra if we would like to see any of them. We decided to stick to the initial plan, as we didn’t think we would have enough time to see that much in just one day. The boat was long and very thin with four seats one behind another and we had it all for ourselves which was great. 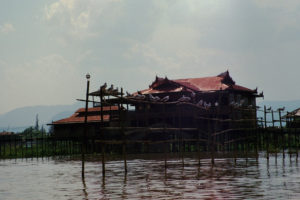 What one should definitely take for the boat is a wind stopper, a hat and a sunscreen. Since you spend the whole day travelling around with the boat the temperatures change and you don’t want to be cold or to have a sunstroke. I was lucky because there were blankets in the boat which I used early in the morning to warm myself up. The boat trip starts in the wide part of the lake where you can see the typical local fishermen standing on one leg and wrapping the other leg around the oar. Usually they want you to pay them money for taking photos of them which was rather annoying and at a certain point we started doubting if they went there fishing at all, or were just pretending for the tourists.

Our boatman then brought us to a silk factory where we could see the process of creating silk scarves. We also visited a place where people were creating silver jewels. There we met the famous lady with the long neck. We went to a place where people were making wooden boats outside, and inside the house a number of women were rolling cigars with different flavors and selling them. These places were all part of the so called floating market as they were all situated on stilt houses. 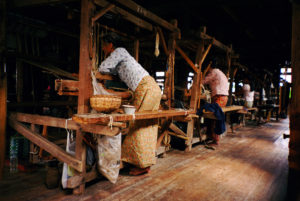 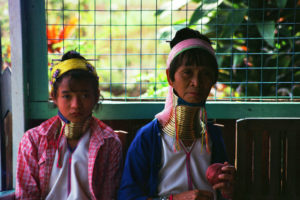 We then continued to Phaung Daw Oo Pagoda. We entered it and saw many locals praying. In the middle there were some weird gold balls. I later read that these are actually 800 years old images of Buddha, to which so much gold leaf has been applied that they are no longer recognizable as Buddha images. Women can enter the monastery, but are not allowed to go near the Buddha figures. 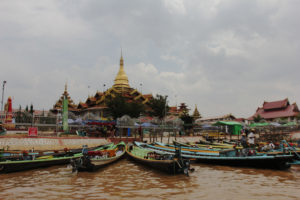 Our boat trip continued with a visit of Nan Pau village which was incredibly beautiful with all of its houses on stilts. There you can go to some of the best restaurants in the area. I found one which was recommended in our guidebook and asked the boatman to take us there. He said he knows a better place and insisted it is not possible to go to the one I have chosen without reservation. We argued for a while and at the end he agreed to drive in this direction. On our way to the restaurant he several times tried to persuade us it makes no sense to go to this restaurant without reservation. We ignored his remarks and when we arrived there was only one table which was occupied. Then we were absolutely sure that what we suspected was true – he was just trying to take us to a place where he is on a commission. The restaurant we chose is called Green Chilli and offers a wide range of Thai dishes, has a great terrace with an incredible view over the lake and all the houses around it. 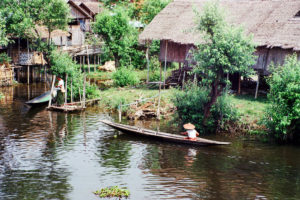 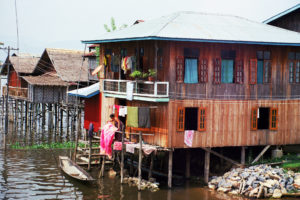 While we were having lunch we could watch a woman take a shower at the pier close to her house. She was wearing a long sari-like dress and was washing her hair using the lake water. There were boats floating around – some fishermen with their catch, old ladies using it as a means of transportation. It was great to just chill on the terrace, enjoy the tasty food and observe the daily routines of local people. 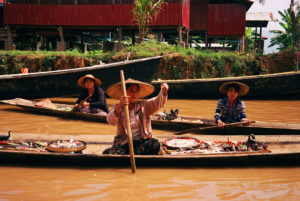 We then headed to the Jumping Cat Monastery and while we were travelling with the boat I was looking in the guidebook for a place I saw on one postcard somewhere in the shops earlier this day. It was a place with many pagodas sitting comfortably on a hill. This turned out to be the village of Inn Dein. I asked the boatman to stop the engine and tell us where this village is located. He said it was too far and we had not paid for it and turned the engine on again. So we had to argue with him and insist that he brings us there. We had to pay additional 5000 Kyat for this and after a phone call with his manager and a confirmation the boatman brought us to the village. We were really happy we decided to go there – when you head to the village the lake turns into a small waterway with houses and land pretty close to you on both sides of the boat. 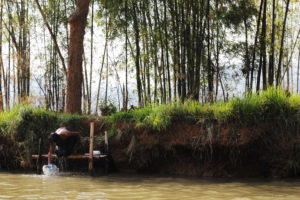 The village of Inn Dein itself is full of women selling beautiful silk scarves and other souvenirs at quite good prices. You reach the hill through a bamboo forest and see another one – the stupa forest. The stupas were so many – old and new ones, some bigger, other smaller, painted in different colors and all of them with their bells on top creating together with the wind a magical symphony which takes you into a meditative state. 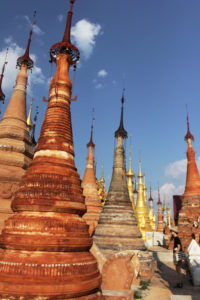 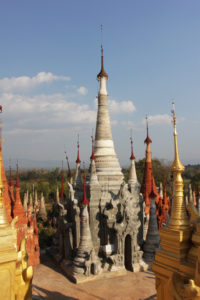 On our way back we checked the Jumping Cat Monastery where the cats are no longer jumping into the lake, as they were once taught to. It was a very peaceful place and the perfect spot for the sunset and the end of the lake boat trip. We checked the floating gardens right next to the monastery, where we could see a vegetable farm with cucumbers, tomatoes and paprika growing in the water. 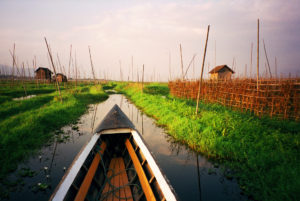 By the time we reached the house of the boat owner it was already dark. We took the bicycles and went to the Night Food Market which was a tiny street with a number of outdoor restaurants. The place was packed with locals but didn’t look appealing to us so I looked in the guidebook for another place to eat and chose Linn Htet. This was a super cute small restaurant with tasty food and the owner being a very nice lady. I had a funny experience when I asked her about the toilet. A little girl came and asked me to follow her. We then went to a house nearby where she opened the front door, I entered, she showed me the bathroom and left the house. 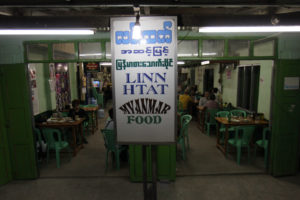 After dinner we went looking for a company which offers taxi service to the airport and found one with prices lower than the ones we were offered by the manager of the so called resort we were staying at. This is the e-mail address of the company: nanmyasein1985@gmail.com They also have a facebook page – mukyinanmyasein and can be reached by phone on 428354066.

When we reached the airport at Heho on the next day I couldn’t believe how ridiculous everything looked. We checked in by just pointing at our backpacks to a man who gave us stickers with the airplane logo. We had to put them visibly on our clothes. There was a giant heap of checked in baggage collected in the middle of the airport. The passport control was a desk where a lady was writing the passengers’ information in a notebook and we could take all the water we had in the “lounge”. It was more like an old bus station in the middle of nowhere. But there was free Wi-Fi! The flight itself was one of the worst I have experienced in my life by far. When we arrived in Mandalay I had to spend about an hour at the airport trying to recover. The staff there went crazy looking at me lying on a bench holding a bottle of water. A lady even came to me and started questioning where I was coming from while Ivo was waiting for the luggage.

If you decide to go to Myanmar, Inle Lake is a must. Together with Bagan they are great destinations, which still remain relatively unpopular. So if you don’t like the crowds with tourists and want to enjoy the genuine Burmese atmosphere you better go in the next few years before the country becomes one of the most desired destinations in Asia.