We arrived in Delhi early in the morning, exhausted from the flight and headed to the hostel we had booked for our stay. It turned out that we could check in after two o’clock which was in about 6 hours so we went to the living room and took a nap on a tiny couch which we also shared with a girl who just came and sat on my feet while I was sleeping. It was the day after Holy festival so everybody was eager to share their impressions. I looked around and noticed how the people in the room had this colorful spots all over their bodies, clothes and hair. The room was packed with all kinds of people united by their urge for adventure and exploration. I observed the situation in the room for some time and the girl sitting on my feet noticed I was awake, looked at me and starteed explaining how I looked like this actress from this movie with zombies. 😀 We had a chitchat with her and her friends and we decided it is time to get up and feel the pace of the city. We took a tuk-tuk and started our sightseeing tour. 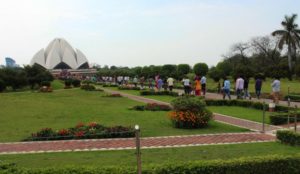 Our first destination was the Lotus Temple which derives its name from its shape. The lotus is made up of white marble and is surrounded by nine ponds which make the temple look like a lotus flower floating on the water. It’s free to visit and is closed on Mondays. There is actually nothing special inside the temple – only chairs for the visitors, but the atmosphere was so peaceful and relaxing that I spent some time just enjoying the moment there. 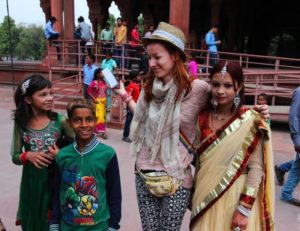 Next in the list was the Red Fort. The entrance fee for foreigners is 250 rupees and there is a separate queue for them which spares a lot of time, because there are a lot of Indians who also wait for a ticket. The fort is a huge site with a number of different buildings inside and it takes hours to explore it. I, personally, was most impressed by Diwan-i-Am with its beautiful red sandstone columns. This used to be the Hall of Audience where the emperor received members of the general public. 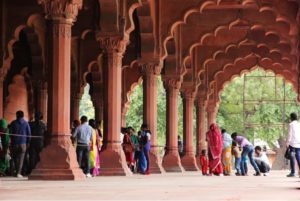 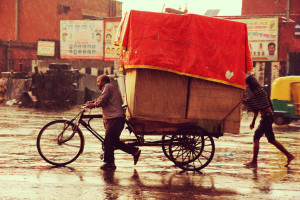 Upon exiting the fort we had to hide somewhere from the rain which just started pouring so we looked for a place to grab a bite. By the time we found one we were all wet. We decided to go back to the hotel, change our clothes and have some rest. 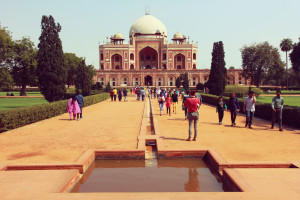 On the next day we started with Humayn’s Tomb – an impressive complex encompassing the main tomb of Emperor Humayun as well as the graves of several other Mughal rulers. It was built by Humayun’s senior widow Bega Begam, whose grave can also be seen there. There are water channels which lead you from the main entrance to the tomb. This is the first garden-tomb on the Indian subcontinent, which was an inspiration for future architectural projects. 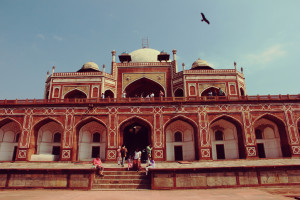 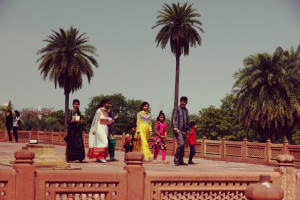 What impressed me the most here, however, was the much smaller, but very beautiful tomb of Isa Khan Niazi. It is situated right after the entrance of the complex and for me was a great place to sit, rest a bit and read about the historical background of the whole complex. 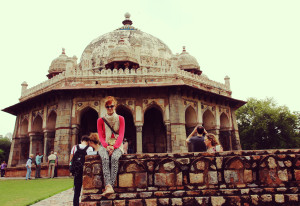 Our next destination for the day was Dilli Haat. This is a market where craftsmen from whole India can get a stall and sell their products. If you are looking for souvenirs you can buy beautiful handmade scarfs, wooden sculptures, leather bags  and wallets or paintings. If you have no space in your backpack you can simply relax in the food area and enjoy a tasty meal under the palm shadows on a reasonable price. There is an entrance fee of 20 rupees for the market. 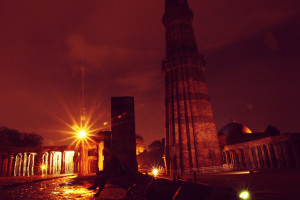 While we were walking around in the neighborhood where the market is located, it started raining again. We took a tuk-tuk and headed to Qutub Minar. The tower was beautifully lit and although it was pitch-dark when we arrived there and we were all wet, we paid the 250 rupee entrance. We enjoyed the place to the fullest because there were only two other guys except for the security guard. It looked really magical and mysterious in the evening with all the shadows and the 73 m high tower. There is a controversy about the origins of this tower. Some believe it was erected as a tower of victory to signify the beginning of the Muslim rule in India. Its construction started 1200 AD and was finished more than 150 years later.

We then walked around trying to find a place to eat, but most of the restaurants turned out to be extremely expensive so we stopped a tuk-tuk, bargained as usual for the price and went to the neighborhood where our hostel was to eat something there.

On the next day we took a train to Agra to see the Tadj Mahal. The city had much more to offer which was a very nice and rather unexpected surprise for us.

Incredible India – the smell of masala early in the morning