We arrived in Lima in the late afternoon after a 12 hour flight from Amsterdam. From the airport we had to reach the Miraflores neighborhood where we had booked a room in a hostel. The instructions from the hostel had provided offered two options – to get a taxi for about 50 Soles ($20) or get adventurous, go to the bus station and take bus with red S on it indicating the direction. Well, we were in the mood for adventures and were also travelling on a budget which is why we decided to go for the bus.

It was an incredible experience! It took us quite some time to understand what actually was going on at the bus station since small minivans packed with people were stopping, a guy was coming out of the door and shouting the direction the van was going to. We missed 1 or 2 S kombis, as there was no space for us in them. We hopped on the next one, paid about 2.5 Soles per person ($1) and started enjoying the crazy ride. A guy immediately freed his seat for us when he saw our confused looks. There was no space for our backpacks so we put them next to the driver. He was a very young boy, driving like crazy and cheerfully singing some Latino songs. His friend who was shouting out the door and trying to attract new passengers was sometimes walking along in the traffic jam and even running after the van when the traffic light was suddenly turning green. They both seemed to enjoy it a lot, making jokes and laughing all the time.

In about 1:30h we arrived near Park Kennedy and had to walk for a few minutes to get to the hostel. We were so exhausted that we almost immediately fell asleep. On the next day we had to catch an early flight to Cusco so we had no chance to explore Lima.

The only time left to check it out was when we came back from Cusco 5-6 days later. This time we took a taxi from the airport which agreed to drive us to the address in Miraflores for 40 Soles – a really good deal. After chilling for some time we started thinking about dinner – we checked the travel guide as well as Foursquare for affordable restaurants nearby. We selected two and got out for a nice evening walk to the first one. The part of Miraflores where we were staying was quite fancy, with many expensive restaurants and night clubs which all reminded me of the wide streets with people queuing in front of restaurants and night clubs in US movies. It turned out that the first place we had selected was exactly like this – we had no chance going in without a reservation and we were definitely not properly dressed for it. And according to Foursquare this was one of the cheapest restaurants nearby! We decided to walk some more and check the other place. It was pretty close to the lively area around Kennedy Park and we managed to order shortly before they stopped serving meals. The place was very nice, we could sit on a table outside and enjoy the warm evening after wearing sweaters and winter hats for several days in the Cusco region.  Since all the tables were occupied by foreigners we assumed we all had looked in the same guidebook. 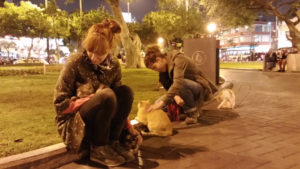 After dinner we went to Kennedy Park which is home to hundreds of cats. Once you start petting a cat at least 3-4 other will come closer looking for attention. For a cat lover like me this was heaven. I was hugging them all, which drove Ivo crazy as he was afraid we might get some fleas as a kind present from the fluffy creatures.

We had our flights on the next day in the evening so we decided to go have breakfast near the ocean and then catch a taxi to the center.

For our breakfast we chose a cafe pretty close to where we were staying – the Buena Vista cafe. It had a magnificent view over the ocean and the good thing is we arrived exactly when they opened. There was already a line of people waiting to have their Saturday breakfast there. We enjoyed a typical Peruvian breakfast and then took a taxi to the center.

The driver left us at Plaza San Martin and we soon were walking the pedestrian street of Jiron de la Union with its countless shoe stores. Finally I felt I was in this Lima which I was expecting to see before I arrived in Peru – colorful buildings, lively streets and friendly people, cute little restaurants where locals enjoy a meal or read the daily newspaper. We took a glimpse into the Iglesia de la Merced and its impressive mahogany altars. In a while we reached the Plaza de Armas and from there Plaza Bolivar. We ended up in the Chinese neighborhood – Barrio Chino, which was so crowded that it took us some time to find a way through and catch a taxi back to the apartment and from there one to the airport.