Our Rajasthan trip started with the capital of the state –Jaipur, also known as the Red City. We arrived there late in the evening and since we had just one day to spend in the town we had to plan carefully what we wanted to see on the next day. 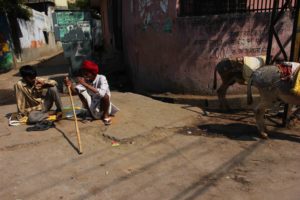 On the Streets of Jaipur

There are three forts near Jaipur and we had to choose only one. There is the Nahargarh Fort which provides a view of the Man Sagar Lake and the Jal Mahal palace, in addition to the beautiful view of Jaipur; the Amber Fort and the Jaigarh Fort.

We decided to go for the Amber fort which is located in the town of Amer, 11 km from Jaipur and connected to Jaigarh fort by a passage. This was a nice opportunity to get to know the city and the surrounding area better. On our way to the fort we passed by Jal Mahal (the Water Palace) which you can see in the middle of the Man Sagar lake. The palace is a five storied building out of which 4 floors remain under water when the lake is full. Our tuk-tuk driver explained to us a bit more about the palace, floating in the middle of the lake. 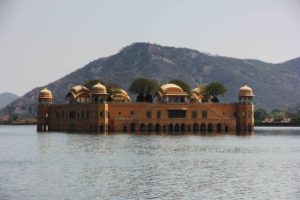 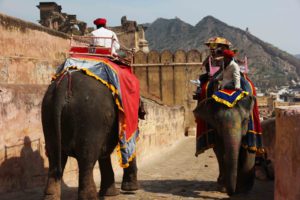 Elephant Ride to the Entrance of Amber Fort

Our next stop was the Amber fort (also known as Amer fort). If you arrive there early in the morning you can ride an elephant up the hill to the main entrance. The animals are decorated with traditional painted patterns and it takes about 30 minutes for them to slowly get you to the main courtyard. We decided to skip the elephant ride and climb the hill by ourselves. 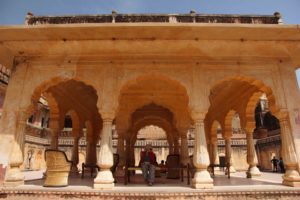 Inside the Amber Fort

Once we arrived at the main courtyard we bought our 200 rupee tickets (less than 3 EUR) and entered the Amer palace. Laid out on four levels, each with a courtyard, the palace consists of the Diwan-e-Aam, or “Hall of Public Audience”, the Diwan-e-Khas, or “Hall of Private Audience”, the Sheesh Mahal (mirror palace) which is the most famous and beautiful part of the fort, and the Sukh Niwas where a cool climate is artificially created by winds that blow over a water cascade within the palace. The place is huge and you have a feeling you are in a maze while trying to find the right direction. The people working there are used to it as they guided us and the rest of the tourists through our visit. It was beautiful and I was really glad we picked exactly this fort. Next time we can check the other two 🙂

Amber Fort View from the Road 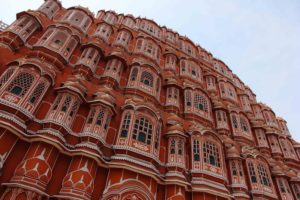 Hawa Mahal – The Palace of Winds

Next in our list was Hawa Mahal also known as the Palace of Winds – a five-storey pyramidal shaped monument. I have to admit I was disappointed by its size. The pictures of the facade I had seen made me think it was at least twice as big as it was in reality. After the Amber Fort this palace looked really small and unimpressive. It didn’t take us too long to go to the top of it, take some photos and leave.

Last stop for the day was the Monkey Temple (Galta Ji). The best time to visit is around dusk but we arrived there too early and had to climb up the hill when the temperature was around 30 degrees which totally exhausted us. There were also almost no monkeys there. I guess they come back from town later, after “hunting” for food among the people there the whole day. At least there was a great panoramic view over Jaipur. The temple is home to hundreds of monkeys, which can become very aggressive and chase you if they think you have food in you. At some point one big monkey started chasing me and I started running down the hill looking for Ivo to help me. He started shouting and walked towards the monkey which made some nasty noises and then went away. This was when we decided we were going back. The good part was that when we almost reached the place where our driver was waiting for us a guy parked his minivan there and took out a lot of fruits. In less than a minute the place was crowded with hungry monkeys fighting for bananas and oranges. We probably spent half an hour taking photos of them. 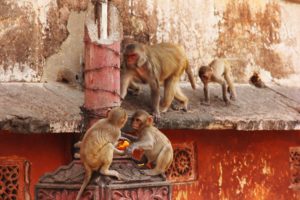 In Front of the Monkey Temple – Galta Ji in Jaipur 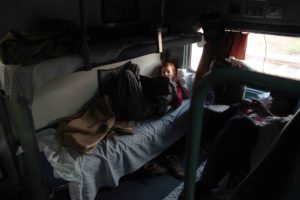 Sleeper in the Train from Jaipur to Jodhpur

We then went back to the neighborhood where we were staying, found a nice cheap restaurant where we ate and went back to the guest house. On the next day we walked around in the neighborhood, had breakfast and then went to the train station to catch our train to Jodhpur. We bought tickets for the sleeping compartment where we could rest, read about the Blue city (this is how Jodhpur Is called) and make some plans for the next day.

We arrived very late in the evening in town and had some difficulties finding our guest house, especially with no one to ask for directions on the street. At the end we found it – its entrance was in a narrow street. The place was amazing. Our room was on the last floor in a renovated part with a great view over the city and of the Mehrangarh fort, lit up with lights at night. There was a rooftop restaurant where we were eating while in Jodhpur. The guesthouse owner’s wife was cooking for us and it was delicious. On the next day we had breakfast there while enjoying the daytime view –  the terrace was higher than most of the buildings around us which allowed us to take a look in many of the houses. We could also hear the muezzin from the nearby mosque. It was a great morning and awesome way to start the day. 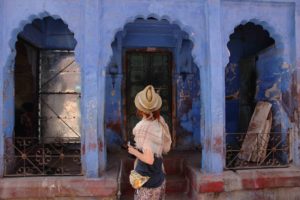 On the Streets of Jodhpur – the Blue City

We started exploring the neighborhood which was the best we have seen so far in India – all the houses were painted in bright colors – exactly as I had imagined an Indian town would look like.

We went to Sardar Market where we found a great shop for all kinds of souvenirs and patchwork pillow cases and covers. We talked a lot with the owner who was a young guy, very interested in Bulgaria and Europe as a whole. He told us some time ago a group of Bulgarian students visited his shop and a few months later when they returned they were able to have a conversation with him in Hindi so he remembered them and the country they were from. We left the shop with two bags full of patchwork quilts and small souvenirs. Some of them we got as presents from the owner. 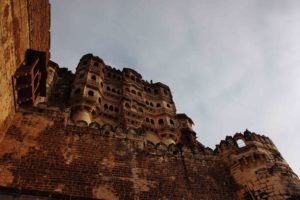 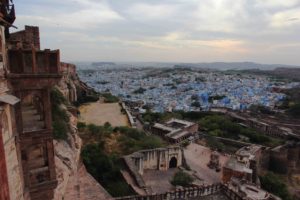 We  then hopped on a tuk-tuk to the fort. The most impressive thing about the Mehrangarh fort is the view over the Blue city. This is one of the largest forts in India. The approach to the fort is guarded by seven huge gates leading you to a museum which exhibits a collection of very well preserved paintings, costumes, royal palanquins and decorated rooms. 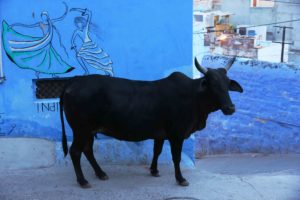 Exiting the Mehrangarh fort – the Best Area in Jodhpur 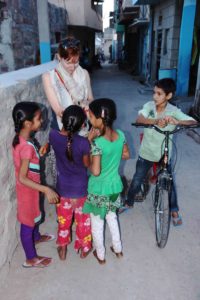 Giving Martenitsi to the local children

We exited the fort from the opposite side to the one where we entered it and the stairs led us to the blue-painted houses which are the reason Jodhpur is referred to as the Blue City. These houses are situated mainly in the area around the fort. As we were walking down the road a group of Indian children came to us and started pointing at my wrist. I was wearing more than a dozen of bracelets which in Bulgaria are worn during the month of March and are called Martenitsa. I gave almost all of them to the children and as a result we were chased by their friends who heard about the gift and wanted to have one for them as well.

After the pleasant walk to the guesthouse we arranged bus tickets to Udaipur which our host booked for us and early in the morning we took the bus. This was our first journey with a bus in India and I should warn you – if you suffer from motion sickness like I do – don’t get on a bus! Not more than 10 minutes after the journey started I wanted to throw up so badly that I started looking for a bag 😀 Ivo then gave me some pills for motion sickness which saved my life. By the end of the trip I had taken a whole blister. Luckily I was so exhausted that in one hour I few asleep. 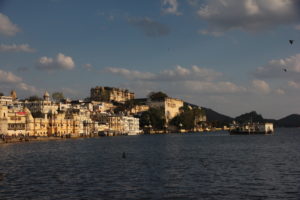 View from the Bridge in Udaipur

It took about 7 hours to reach Udaipur and since we left Jodhpur very early in the morning we had half a day left to explore the neighborhood. Udaipur, also referred to as “Venice of the East” is incredibly beautiful with the lakes surrounding it and penetrating the city. It was there where the James Bond movie from the 80s – Octopussy was shot. We even had the chance to watch it on TV in our hotel room and then go to the places where the scenes were taking place. 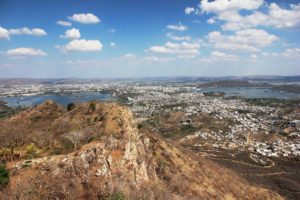 We went to the Monsoon palace which is a hilltop palatial residence, offering a view over Udaipur’s lakes and surrounding countryside. It is in a very poor condition but its view is worth the effort of reaching it.

We also visited the City Palace which was built on a hill top that gives a panoramic view of the city and its surrounding, including several historic monuments such as the Lake Palace in Lake Pichola, the Jag Mandir on another island in the lake, the Jagdish Temple close to the palace and the Monsoon Palace. 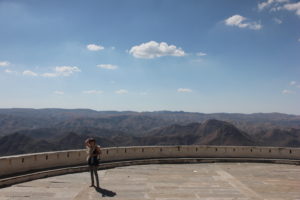 View from the Terrace in the Monsoon Palace near Jodhpur

What we most enjoyed was walking around and finding some narrow streets with beautiful colorful houses, where we could feel the rhythm of the city, away from the touristic hustle.

Where to eat in Udaipur

We found one of the best places to eat – Millets of Mewar. As the city is very touristic and noticeably more expensive than the other places we had been in India so far, this restaurant was just perfect – it had two floors with great views over the Lake Pichola and the food was delicious and affordable for budget travelers like us. 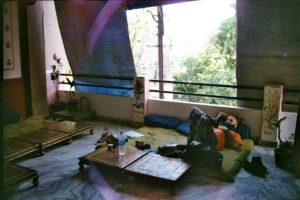 Second Floor of the Millets of Mewar Restaurant in Udaipur

At the end of the second day we took a taxi to the airport to catch our flight to Bombay.