At first glance Aguas Calientes does not impress much with its looks. On the contrary, most of the houses are not plastered and all you can see when you look around is the beautiful landscape and its huge contrast with all the bricks and concrete placed there by a human hand. So it is somehow disappointing how we, humans, manage to ruin such incredible places. After all we were also part of this as we needed accommodation, as did all of the other tourists there. We slept in a cute small hotel which was like a maze inside. It was difficult to find our room or locate the exit as it was designed as a tree – with a small ground floor area getting bigger and bigger the higher you go. In front of our room there was a terrace facing the mountains so we could enjoy a great view, apart from all the buildings around. Our room and the terrace made us feel as if we were in a mountain hut – the floor was wooden, as was the whole terrace and the stairs leading to it from the second floor. 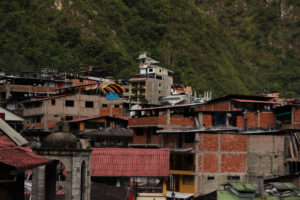 While we were chilling at one of the squares in the village drinking beer, a guy who overheard us talking in Bulgarian came and started talking in Bulgarian as well. He was travelling with a group of 7-8 people from our home country and they all just came down from Machu Picchu and were still under the influence of getting to see this heavenly place, as they described it.

We spent some more time outside, went back to the hotel to have some rest and then it was time to walk around and look for a nice local restaurant. As the hotel was located in a narrow street right behind the central square in second we were there to discover there was a religious festival taking place there. People were dancing, some of them were carrying skinned lambs on their back, there was even a guy carrying a cow head, whose tongue was swinging around and hitting the onlookers standing too close to the dancers. All the streets were crowded with locals, there were people with different music instruments and the small village turned into a carnival. 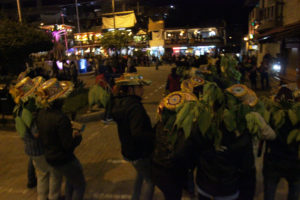 We checked some of the restaurants on the main street, but they were all targeting the rich tourists, so we thought we can maybe check on the other side of the river (the river separates the village in two parts). It turned out that there were some quite affordable restaurants there and everything was much cheaper, there were almost no tourists and it was the area where locals were spending the evening – the street was crowded with little children, there was also a lit up soccer field full with boys playing. While we were waiting for our orders I took my usual evening nap on the table – this was happening every evening around 6-7 p.m. at dinner – Martinka and Ivo were talking and I was sleeping on the table.

Since we decided not to use any bus services and to climb up the hill to Machu Picchu instead, we woke up quite early for which I didn’t even need an alarm as I was already awake around 5 a.m. due to the time difference. We had breakfast, the morning portion of coca tea and headed to the train tracks which we were told we need to follow. So we walked for about 20 minutes and then reached a bridge over the river which was guarded. We showed our tickets to the guard and were told to look for the stairways on our left. 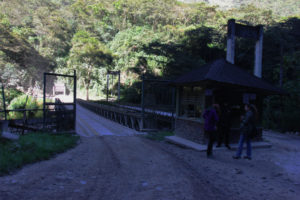 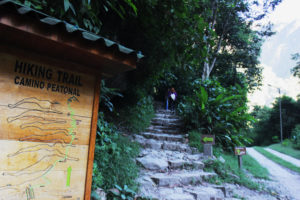 We didn’t expect to be climbing stairs up to the hilltop and were also told by locals that it is not a steep mountain trail. Well, it was! By the time we reached the entrance to the ruins we were totally exhausted, but we could at least enjoy great views on our way. And there were almost no people. 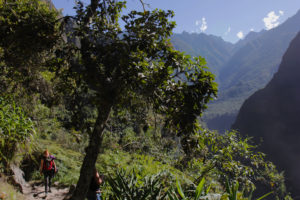 We arrived at a flat area looking like a paved square where crowds of tourists hopping off of the buses were queuing to enter Machu Picchu. It didn’t take long until we were inside but the entrance trail is quite narrow so we had to go with the pace of the crowd for about 10 minutes. 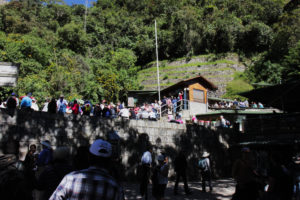 And then we were there! 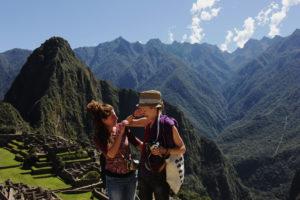 It was around 10 o’clock and since we had purchased a combi ticket including the mountain peak Huayna Piccu (Wayna Piccu) which on a typical Machu Picchu photo can be seen behind the ruins – we had to enter in the time slot between 10 and 11 a.m.. There is a restricted number of 400 visitors who can climb it daily and they are separated in two groups – the first group can pass through the entrance gate from 7-8 a.m. and the second group from 10-11 a.m. This was a tiresome exercise- a very steep climb leads to the summit and there are some steel cables which you can use as support. The closer we were getting to the summit the weirdest people looked – those in front of me were literally crawling. It took us about an hour to reach the top of the mountain. From there we could see the remains of the condor-shaped Inca town. 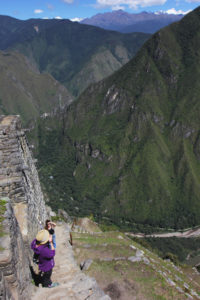 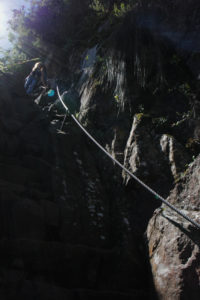 It is considered that this Inca citadel served as political, administrative and religious center. New theories, however, suggest that it was rather a royal estate designed by the Inca ruler Pachacutec. It remained undiscovered by the invading Spaniards. Around 500 people are thought to have inhabited Machu Picchu, the construction of which took about 50 years with thousands of people working on it.

In order to be able to inhabit the citadel, which sits at 2430m, the Incas had to level the site, channel water from high mountain streams through stone canals and build agricultural terraces for corn, potatoes and coca.

We spent some time at the summit and noticed it was getting too crowded so we decided to go to the terraces located under it and enjoy the best picnic ever. 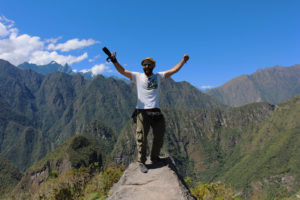 It was a bright sunny day with a few fluffy clouds in the sky. From where we were sitting there was an awesome view over Machu Picchu, which from this height looked so small that there were tourists who actually were not sure where it was, when they were looking down the hill. The people inside the citadel looked like little colorful ants crawling back and forth.

It took us about 40 minutes to climb down and then we had 2 hours to walk around in Machu Picchu as it closes at 4 p.m. 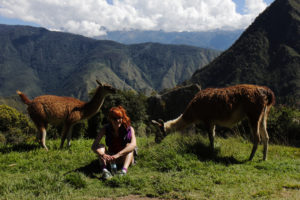 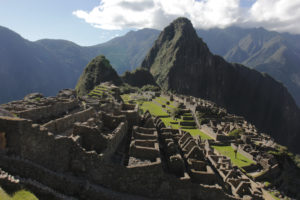 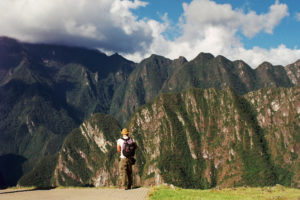 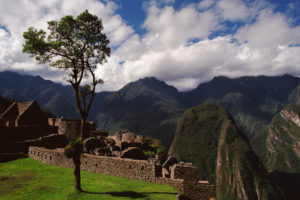 We explored the site and then climbed the hill in the direction from which we thought we entered. There we spent some time resting at the agricultural terraces with the best view over the ruins and the Wayna Picchu mountain behind them. The energy was amazing, almost all the tourists were already gone, it was so peaceful and recharging. We were, though, absolutely exhausted and decided to take the bus back to Aguas Calientes. 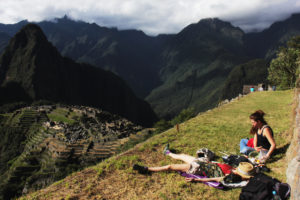 When we exited we found out that the ticket for the bus was about $12 per person and decided to invest this money in a nice dinner and try to go back to the village from where we came. By the time we reached our hotel we could barely move and since our room was located at the 3rd floor of the building it was a real challenge to climb all the stairs leading to it.

We were thinking to check the natural springs in the village but then decided we were too tired for this. We didn’t even go for a dinner and went directly to bed. On the next day we had to catch the morning train back to Ollantaytambo so I really hoped I would be able to rest and recover fast.