The Rock-Cut Churches of Lalibela

If you plan on visiting Ethiopia, then the town of Lalibela must be part of your itinerary. Lalibela is located at about 2500 m above sea level in the Amhara region. The locals proudly state the population of the town is 100% Ethiopian Orthodox Christian.

The churches are built during the reign of Gebre Mesqel Lalibela, who spent some time in Jerusalem in his early years. He is believed to have attempted to build a new Jerusalem. The rock-hewn churches are considered as the most impressive historical site in sub-Saharan Africa. They are grouped in two main clusters – Southeastern and Northwestern. The most famous and for many the most impressive church forms the third group – this is the church of St. George.

This is the most finely executed and best preserved church which is the only one left unprotected by a shelter. The church is a bit isolated from the other two groups of churches and is the spot chosen by tourists to wait for the sunset. So if you leave this church last in your program you need to be prepared to meet all the other tourists exploring the churches this same day. 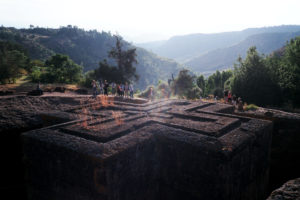 Bet Medhane Alem (House of the Saviour of the World), home to the Lalibela Cross, is believed to be the largest monolithic church in the world with its 11m height and covering an area of almost 800 sq m.

Bet Maryam, Meskel and Danagel – you can reach the three churches from Bet Medhane Alem through a small tunnel. While Bet Meskel and Bet Danagel are two very small chapels, Bet Maryam is much more impressive not only from the outside. It is very popular among the local pilgrims and you can still see them sitting there reading the bible. In my personal list this church is sharing the first place together with Bet Gabriel-Rafael. 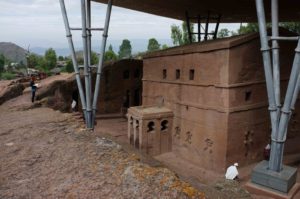 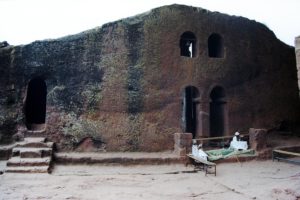 Bet Mikael and Bet Golgotha share a common entrance, women are prohibited to enter the latter. Within Bet Golgotha is situated the Selassie Chapel where King Lalibela is believed to had been buried.

Bet Emanuel was the private church of the royal family and is regarded as the only full monolith in the southern cluster. 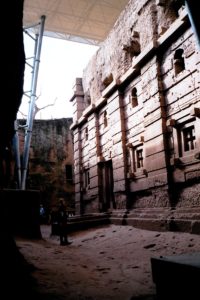 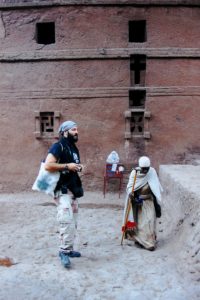 Bet Mercurios, Bet Lehem and Bet Abba Libanos – the first one is a cave church which may be a former prison, the second one is a small chapel. The last one – Bet Abba Libanos has the most beautiful legend for its creation – it was built overnight by Lalibela’s wife and the assistance of a group of angels after the king’s death. 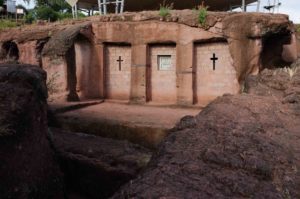 Bet Gabriel-Rafael, possibly a former royal palace, as I already mentioned, is among my favorite churches in Lalibela. It is surrounded by a deep trench which you cross on a wooden walkway. 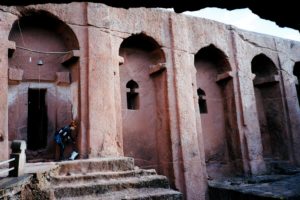 How to get to Lalibela

How to get to Lalibela