I finally found some time to tell you about our incredible journey to magical Iceland which has left us breathless and absolutely in love with its sometimes harsh but so beautiful fairytale-like nature. It is no surprise that this land has hosted so many movie-makers looking for a dramatic scenery. I definitely want to go again in winter, as we went in June, when the day is endless and there is practically no chance to see the Aurora Borealis. This time we were travelling with our 1-year-old daughter and going in the warmer part of the year was an absolute must as our plan was to go camping and sleep in a tent. This seemed a great idea at first, but after a sharp drop in temperatures one night it was no longer an option for us. We wanted to make the popular circle around the ringroad and even go to the Westfjords, but by the time we reached the north-western part of the ringroad, the weather was so bad and foggy that we decided it would be better to just head south and spend the rest of the time around Reykjavik.

So here is our itinerary:

We arrived early in the morning at the airport and were taken with a bus to the car rental company’s office where we took our Dacia Duster, which was to become our home for the next weeks. As initially planned we headed to Reykjavik to spend the day there. On our way we found the only supermarket working in the area on Sunday and bought food for the next couple of days. As you probably know food in Iceland is outrageously expensive so eating out is not an option. We had our little gas stove with us so didn’t have to worry about this. We parked our car in front of the impressive Landakotskirkja or Basilica of Jesus Christ, which turned out to be the only catholic church in whole Iceland. It is quite interesting from the outside and also worth seeing from the inside. It is located close to the pedestrian zone in the center, so we walked to the center, which we needed not more than 2 hours to explore. We ended up eating veggie noodle soup in an Asian fastfood restaurant, which was the cheapest option – 1500 ISK or around 11 euro. Honestly, I didn’t think that spending more than a couple of hours in the capital makes any sense given the incredible natural beauties you could see instead.

In the afternoon we headed to one of the nearest campings – Vogar, which was under construction but still open. We bought a camping card for EUR 159 prior to our arrival. Thus, we could sleep in any of the camping sites included in the offer by only paying a tourist tax of 333 ISK (EUR 2.4) per night.

The weather was fantastic with the sun shining bright above us all day and night. There was no bathroom but the kitchen was well equipped and there was so much food left behind by other tourists, that the lady managing the place told us to take whatever we want. We did and cooked dishes with these products till the end of our stay in the country. So it was a pretty nice and welcoming start of our journey.

This was the day dedicated to the Golden Circle. We woke up well rested, packed our stuff, had breakfast in the common space of the campsite and then headed to Þingvellir (Thingvellir) National Park where we enjoyed a pleasant walk, then visited the Geysir and the waterfall Gullfoss, with the latter being my absolute favorite. 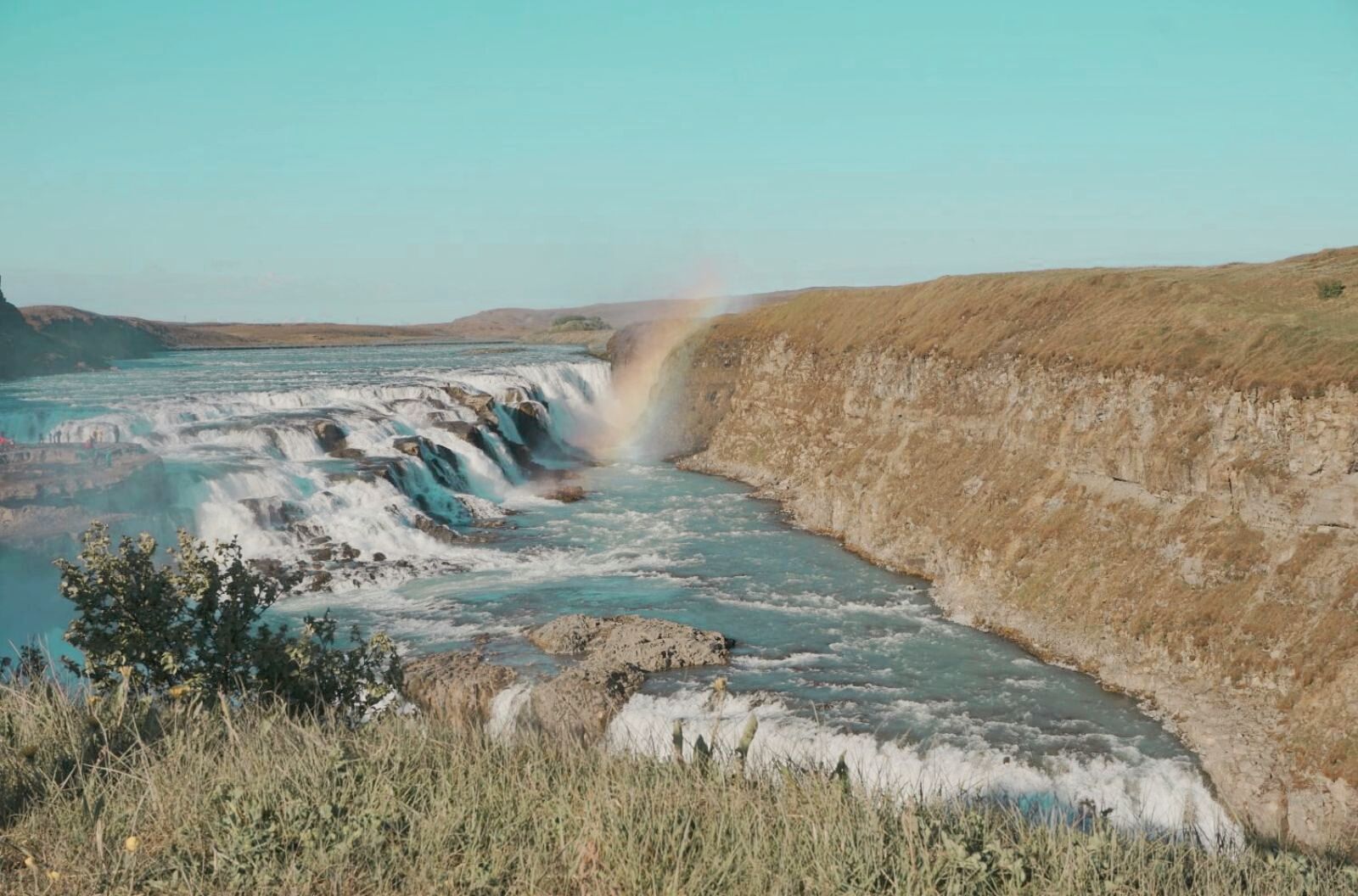 Our initial idea for camping was Alfaskeid, but we ended up in Skjol, which was a rather disappointing choice, as there was no common space or kitchen, just a restaurant and showers for which we had to pay 400 ISK (EUR 3) per person. The good thing was there was a huge trampoline for Reya to enjoy and we got a 20% discount for entering the Secret Lagoon. Due to its location between Geysir and Gullfoss it is very popular spot and was the most crowded one we’ve slept at. The best thing about this camping was the presence of several horses which came to us when we arrived and were there when we woke up early on the next morning. This was our first interaction with the Icelandic horses – which by far are the friendliest ones I have met. 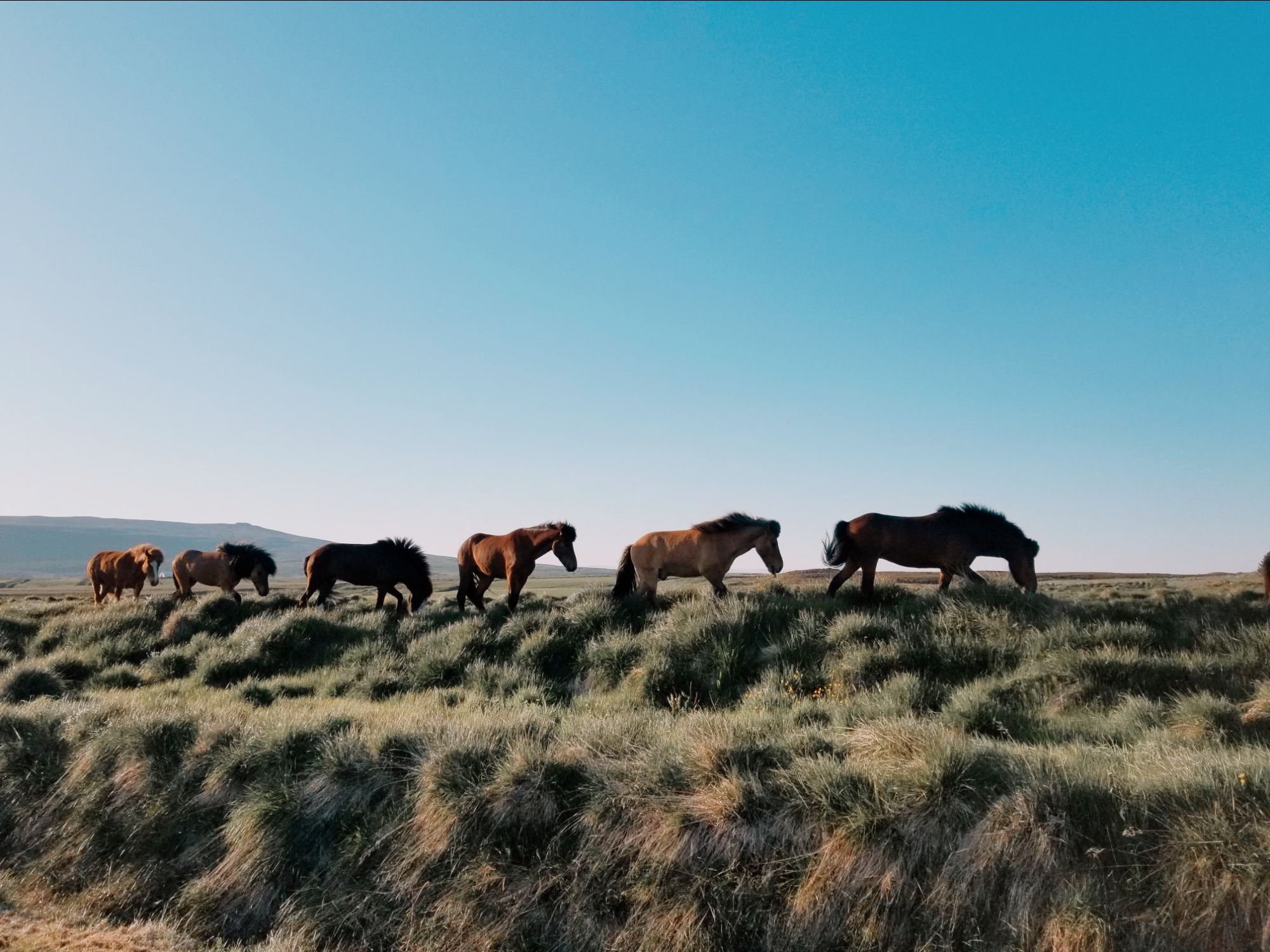 First interaction with the local horses.

Since we had the discount vouchers for the Secret Lagoon we decided to check it out. On our way we saw an amazing canyon by the road, so we stopped to see it and have a small snack. The emerald water was fascinating and standing on the edge of the cliff with these masses of water gently moving around it was such an experience. The best thing about Iceland is that you can bump into absolutely incredible places so you really shouldn’t plan too much and rather float and absorb everything this land has to offer. 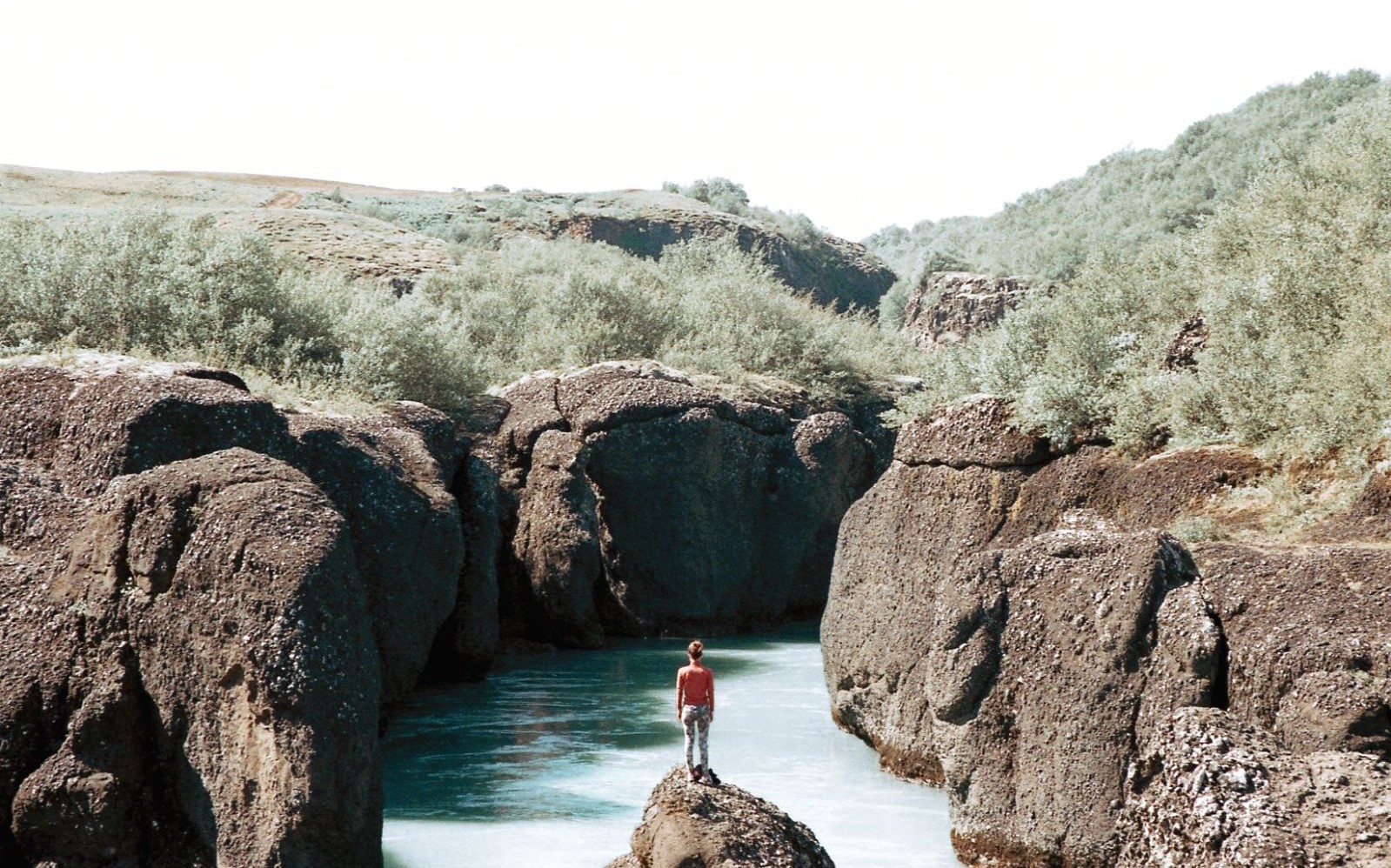 Gazing at the majestic emerald river.

We spent some time in the Secret Lagoon which was not so secret, but rather crowded and nothing really special. The entrance fee with the discount was 2400 ISK (EUR 17) per person.

Next was Thjorsardalur waterfall which we reached by driving on a very rocky F road. Due to the difficult access the place was almost empty and we could enjoy the rest of the sunny day there without any crowds around us.

For camping we chose Langbrok, which had a small warm kitchenette and showers we could use for free. There was no stove so it was great that we had our little portable one and could prepare a dinner. Most of the people at the camp were with caravans or campers and had no interest in using the space, so we had our little private heaven for the evening.

I woke up with an improvised waffle-cake with a candle to blow held in front of my sleepy face by Ivo. It was the best birthday present in the best surrounding. We packed everything and headed to the famous Reynisfjara black sand beach. On our way we saw so many waterfalls with Skogafoss being the most impressive one. Reya was sleeping so I couldn’t enjoy it to the fullest, but Ivo went to touch the falling water. 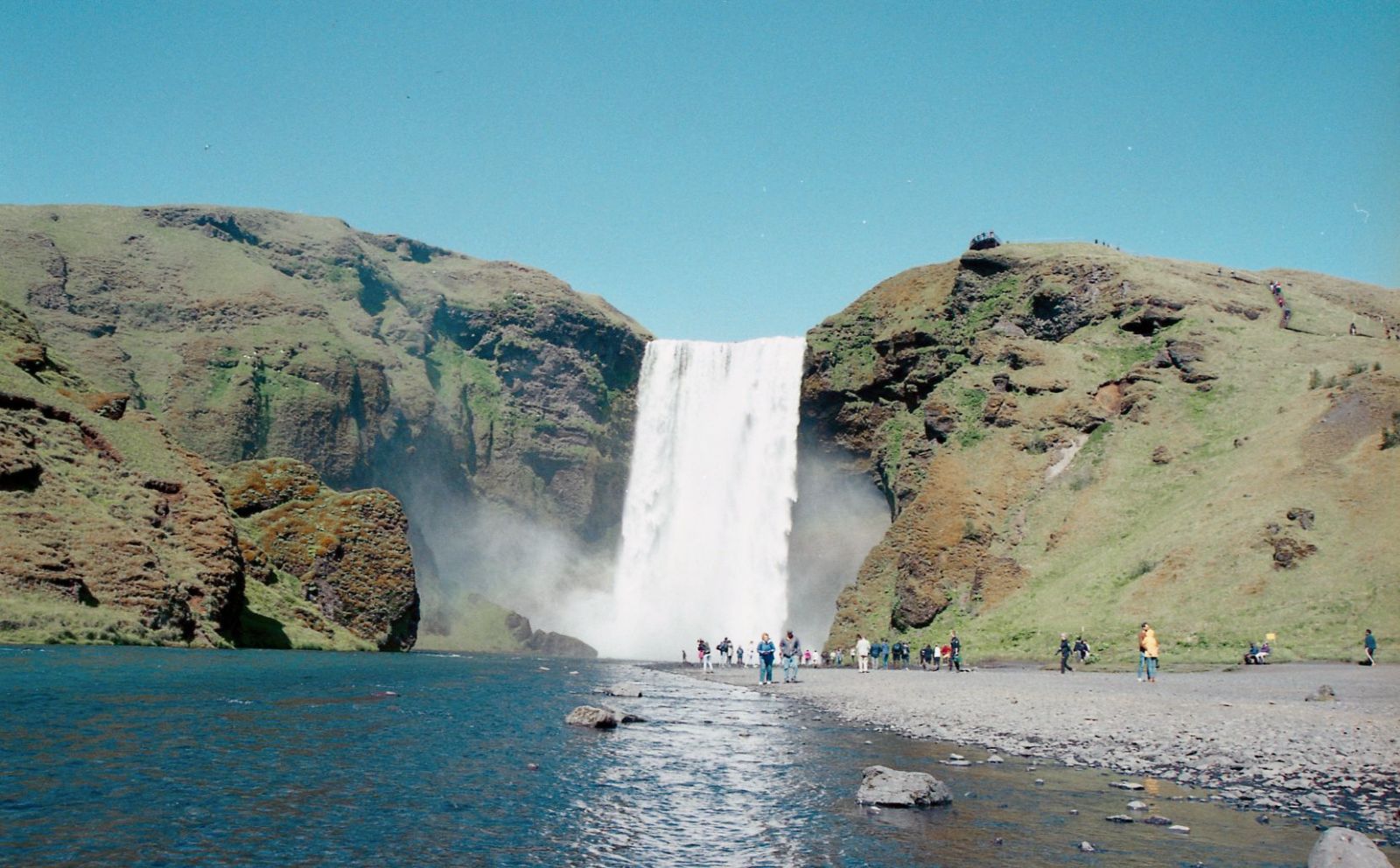 The beach was really impressive but it was sooo windy that it was a huge effort to move while the wind was blowing in our faces. 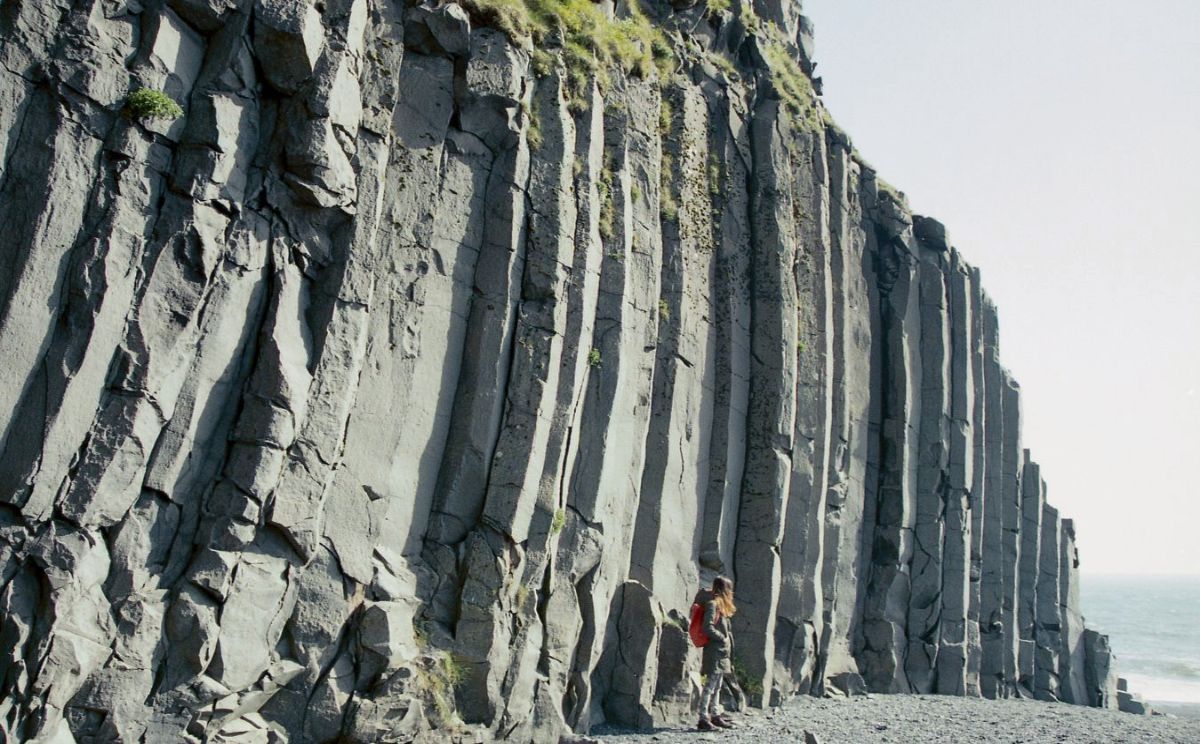 The highlight of the day was the Seljavallalaug swimming pool which apparently is the oldest one on the island. A short trek up the hill takes you to this abandoned, yet kind of crowded place. The fact that it is not maintained is the reason why many people don’t find the courage to enter into the greenish water, but we did and it was fantastic. With a small river running right next to it, this might be the best swimming pool we have been to in Iceland. 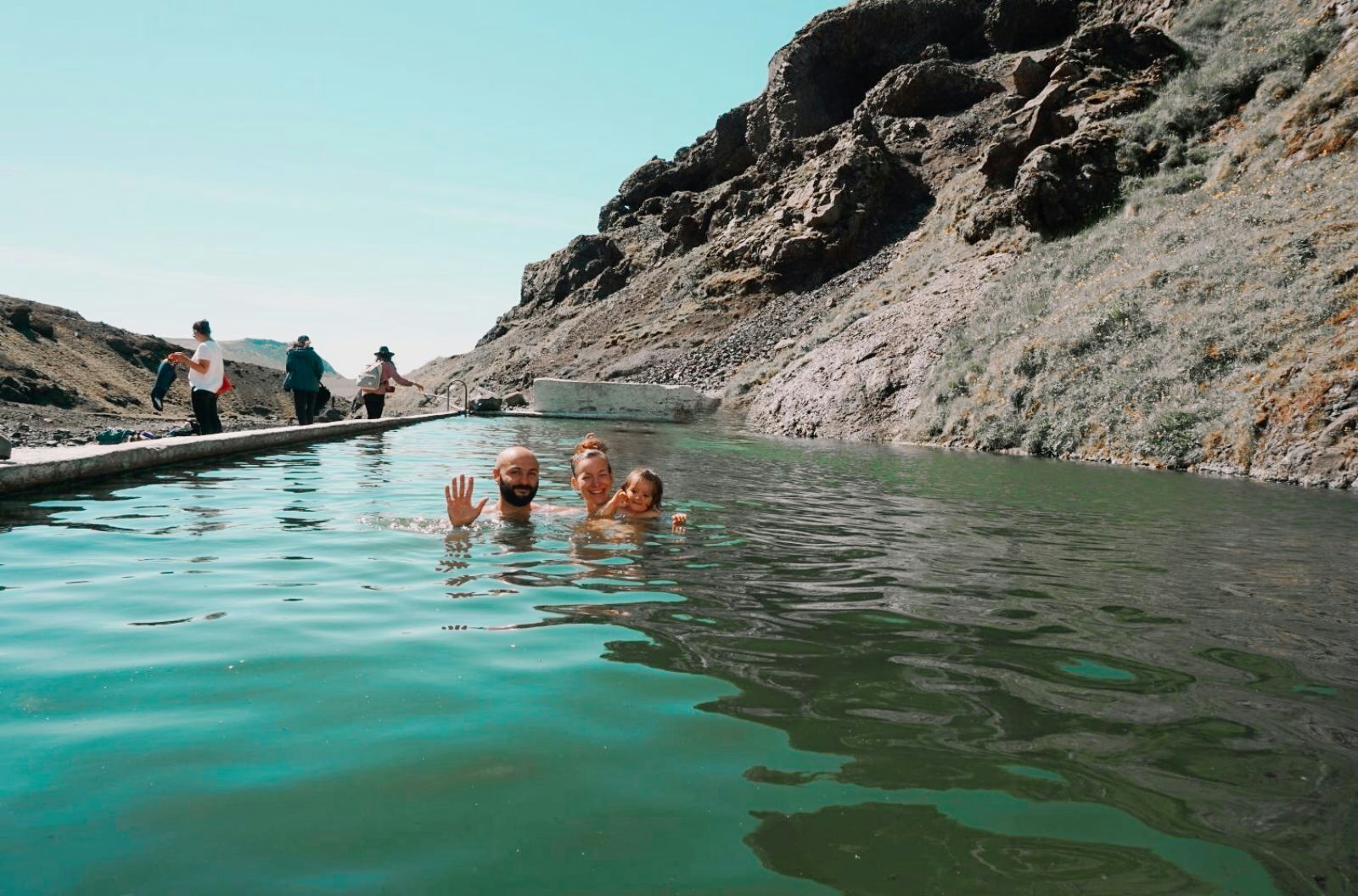 We passed through the town of Vik and stopped just to see the town church  and for dinner drove to a lava field where we stopped to cook, enjoyed a birthday meal and had a walk on the frozen lava, covered with a layer of thick moss. Walking on it was like stepping on fluffy clouds, bouncing like a little child. 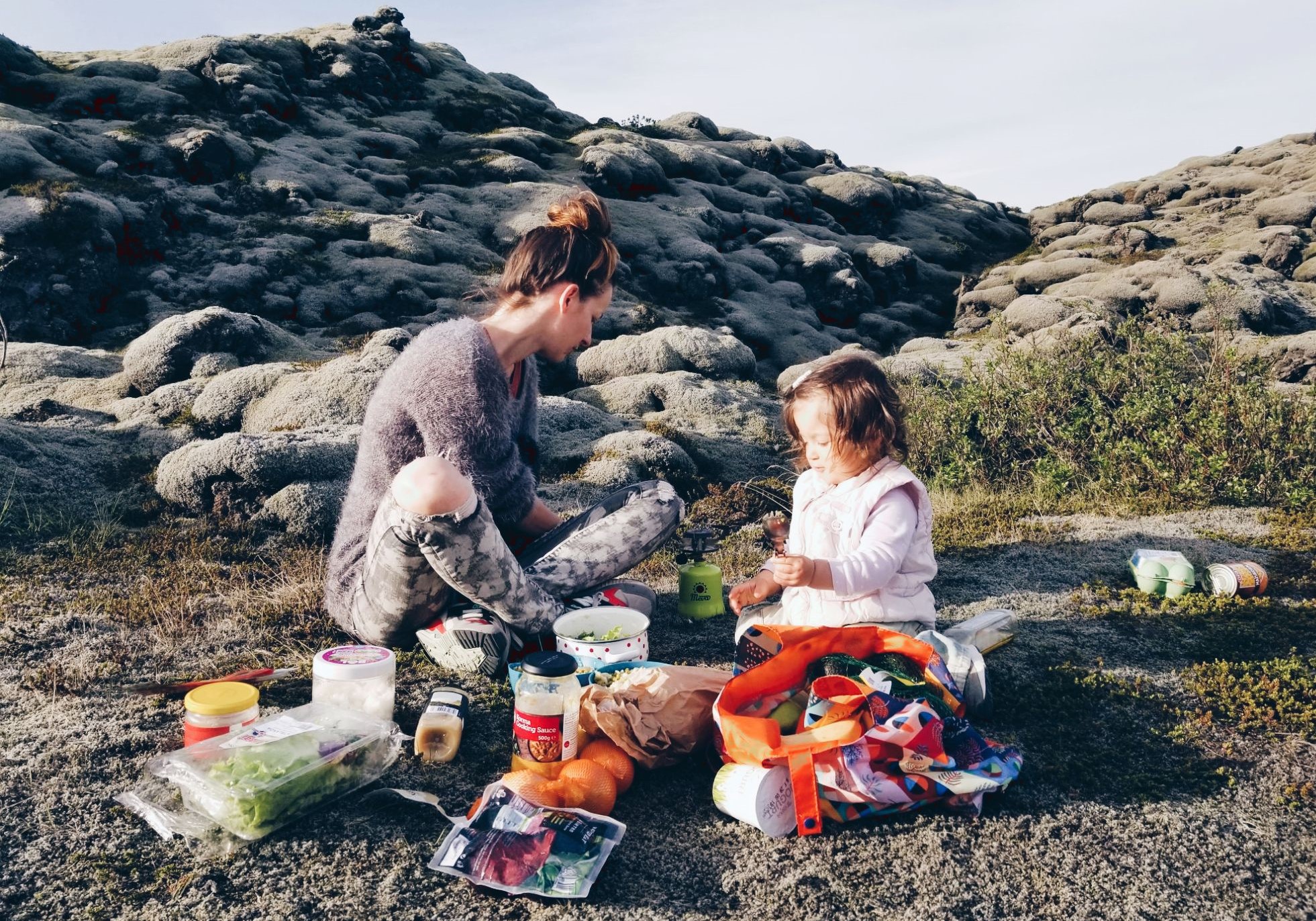 Preparing dinner in the middle of a lava field

The weather was so warm with no wind and we didn’t want to leave, as we didn’t have to think about driving in the dark. This is the best thing about the never-ending days during summer in Iceland – you don’t have to worry about finding your way or setting up a tent. Only that we were with our little pumpkin who needed a proper rest, so we headed to the camp of Kleifar Mork. It was a very basic place with two sinks and two toilets, but the location was one of the best we’ve seen during our trip – next to the campsite for the tents was a waterfall where on a sunny day you could bath. And we could hear the waterfall while falling asleep in the tent. The weather was getting colder, though and we started sleeping with an extra layer of clothes.

When we woke up we understood that the chances for a good weather are equal to 0 – there was some fog, it was cold and windy. We had a very fast breakfast and since we had to drive 350 km to the next camp we jumped into the car. We only stopped to see the incredible Jokulsarlon glacier with its ice giants floating beautifully to the vast ocean. This is one of the most spectacular places in Iceland and is definitely not to be missed. And do mind that it is winter-cold there. I still remember this guy with his white socks and flip flops slipping around in a desperate attempt to explore the area around the water. Our next stop was the town of Hofn where we bought some food and put some fuel in the car. 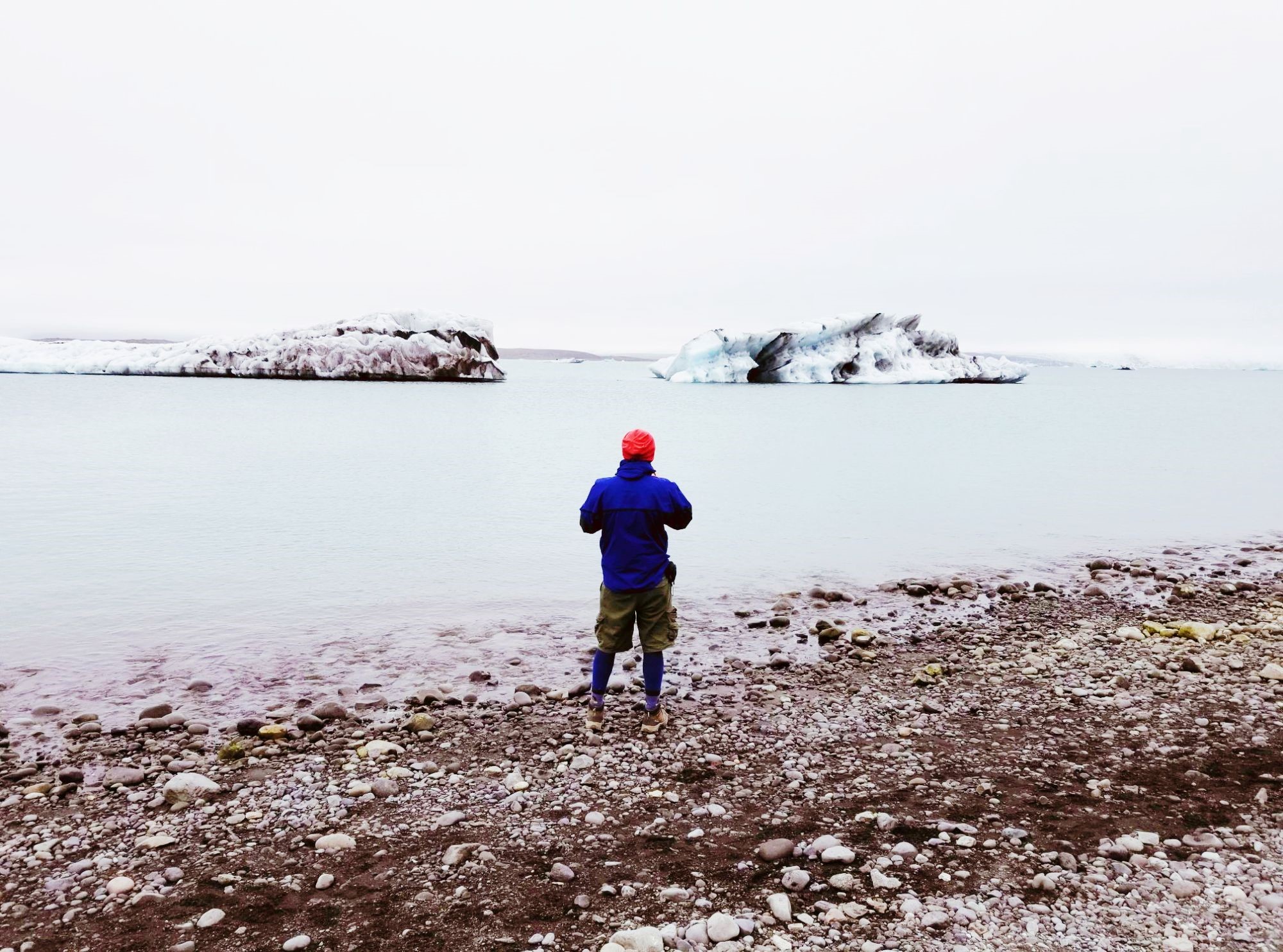 The magnificent ice giants of Jokulsarlon making their way to the vast ocean.

The road to the camp was magical – with the huge rocks on our left fighting the angry ocean waves on our right and us in between. The fog which was coming and going was just adding up to the surreal feeling the landscape was giving. The campsite of Faskrudsfjordur was incredible – it has its own little river running through and a little forest, where we put our tent to get some protection from the rain which was quietly starting to gain strength. It was getting super cold, so we had a very fast dinner and then crawled in the tent. The rain was getting stronger and stronger, accompanied by some heavy wind which even woke us up in the middle of the night. It was a bit scary, because we were not sure if the tent will survive, but luckily it did and it was the last night we spent in it. 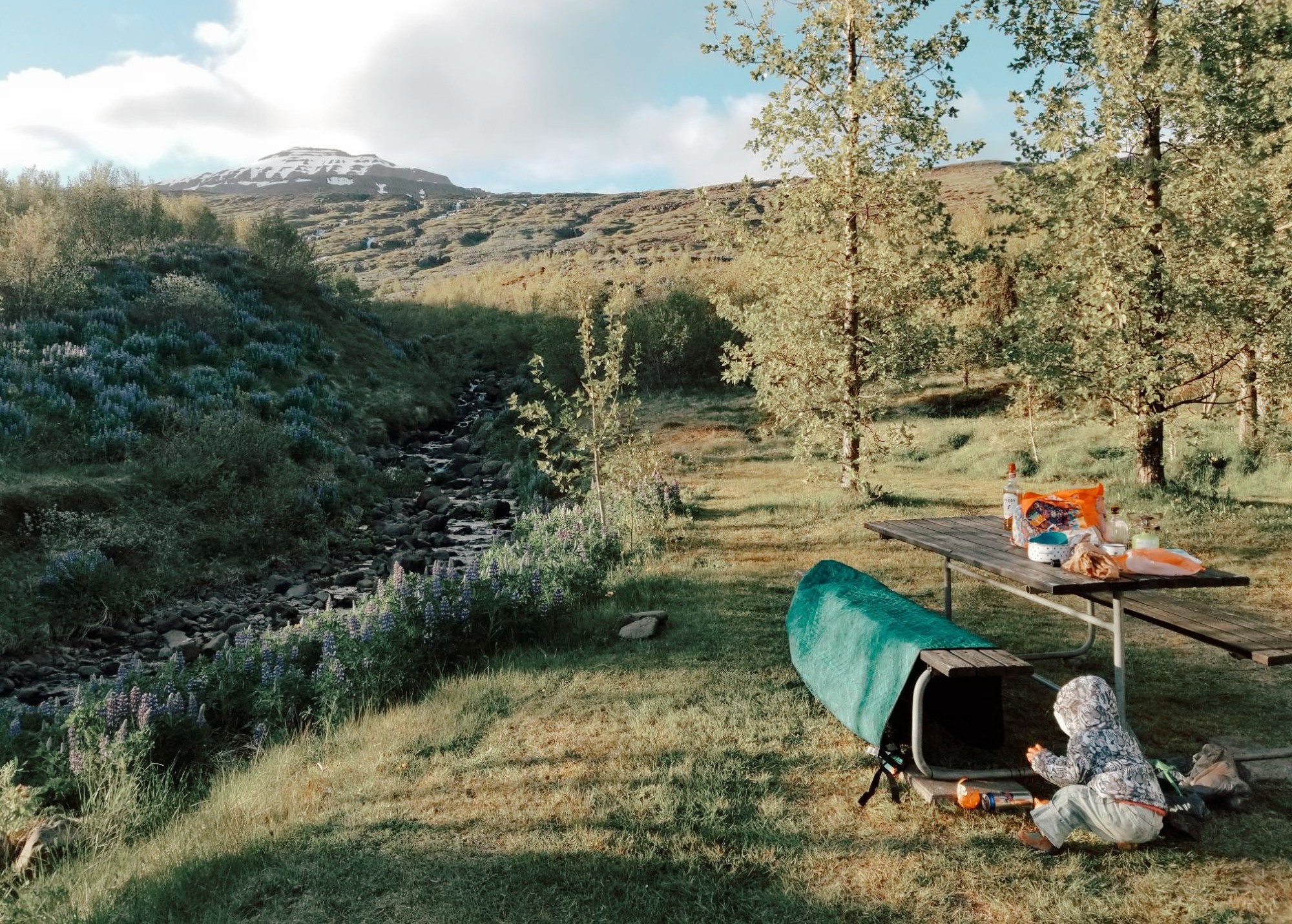