We arrived in Bombay (Mumbai is its official name since 1996) late in the evening and while travelling with a tuk-tuk to the guest house where we were staying, we realized that this part of India is a totally different. First, there was no bargaining with the tuk-tuk driver. Also, the city was noticeably cleaner than any other city we had been so far in India. People looked different, there were not that many women wearing saris, there was this Western feeling about the place. Which I, as a tourist, was not so impressed with, because I was looking more for the authentic India. So our Bombay experience was more about having some rest and just walking around, because we were already getting very exhausted by the intense program and all the impressions of the cities we had seen in such a short time. 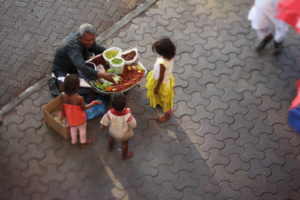 Candies for the children

While in Bombay we went to see the Gateway of India. It overlooks the Arabian Sea and used to be the entrance point to India for viceroys and governors. It was built as a welcome to King George V for his visit in 1911. It now reminds locals of the British colonial rule over India.

On the opposite side of the street is situated the 5-star Taj Mahal Palace which we entered just to have a glance at the interior. It is widely believed that the owner of the hotel was refused entry to one of the high class hotels, as it was restricted to “whites only” which was the reason he decided to build the Palace. 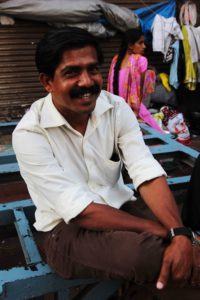 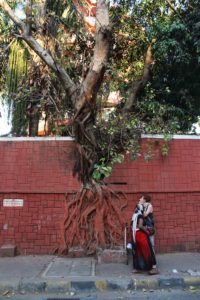 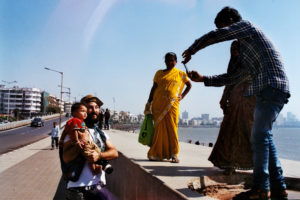 Can you hold our baby for one photo sir?

We also walked along the Marine Drive – a more than 4 km long coast boulevard where many locals wanted to take photos with us. I guess this is something that doesn’t change regardless of the Indian state you are in. 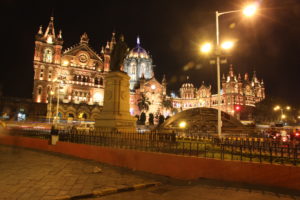 In the evening we passed by Chhatrapati Shivaji Terminus, a Victorian Gothic style railway station, built in 1887 for the Golden Jubilee of Queen Victoria. It was beautifully lit in the evening and I think this is the better time to see it.

On our second day in Bombay we met the guesthouse owner who was a very nice lady, professor at the university. It turned out she worked for a while in Saraevo during the 90s and we could talk about the Balkans and the political situation there. She advised us to visit the ISKCON temple and eat in its restaurant. There we met a monk from New Zealand with whom we talked a bit. He was desperately trying to convince us his truth was the only one existing out there. Although he was a bit annoying in the way he was talking to us it was still interesting to hear his point of view. The temple is really close to Juhu beach where we spent the second part of the day. As it was getting late it was getting more and more crowded. People  were meeting there, some were bathing in the very dirty water, others were enjoying a beach picnic with friends. When we left around 11 p.m. it was still very lively. 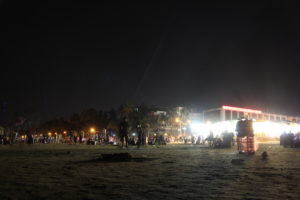 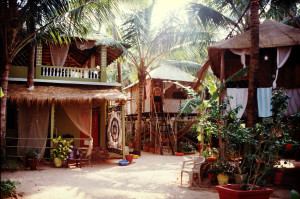 On the next day we had a flight to Goa. When we arrived at the Dabolim airport we saw the counter of a taxi company offering transport to the most popular Goan beaches. We needed one to Agonda, paid for it in advance and in less than 2 hours  we were enjoying the beach view from our hut on stilts. This place was heaven. It was starting to get really hot and it was end of season which was just great – there were almost no tourists and we had to share the beach with a few other tourists. Agonda is still not among the most popular destinations in Goa which is the main reason we decided to stay there and this was an excellent decision. 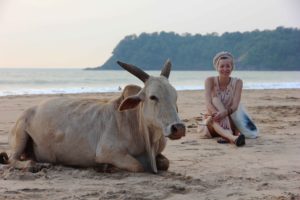 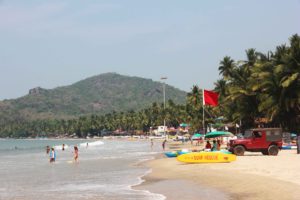 We decided to rent a scooter and check some other beaches as well. This was the best part of our trip so far – we checked the nearby Palolem beach, which was incredibly beautiful, yet very touristic. We also tried to find the Butterfly beach, but realized we had been making circles for a while and eventually gave up. It was so nice just driving through the villages or the tiny roads, shaded by giant palm trees. 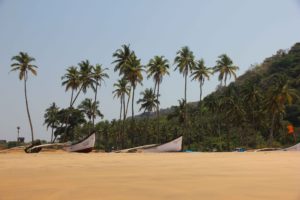 Goa was amazing – the food, the nature, the people. It was the best way to end our Indian journey!