I’ve been interested in visiting Petra for a long time now and was quite happy to find out a low cost company would start flying to the city of Aqaba from my town. So I immediately bought tickets for a one-week trip and started planning. For someone short on time, Jordan is the perfect destination – the country is small and a week is enough to see most of the interesting sights. Here is our itinerary:

We arrived at the Aqaba airport in the evening and took the car from the car rental company, which we booked with Thrifty and were quite happy with our choice. As the airport at Aqaba is a military one, no car rental companies are allowed to have their offices there, so the front seats of a car are used as an office instead. In case you have some special requirements you forgot about at the time of booking you have to inform the company in advance.
We stayed at a hotel outside of Aqaba, a few metres from the South beach with its famous coral reefs and were quite happy with it.

For the second day we had planned a visit of Wadi Rum national park. It takes about 1:30h drive from the South beach to enter the park. You have to book a jeep tour in order to see the park, we chose the one-day visit, which includes lunch, tea and water and a driver who takes you through the desert and its famous spots. You can start at 9 and spend the whole day there, admire the sunset and then go back to your hotel. If you want, you can also stay for the night in a bedouine camp. 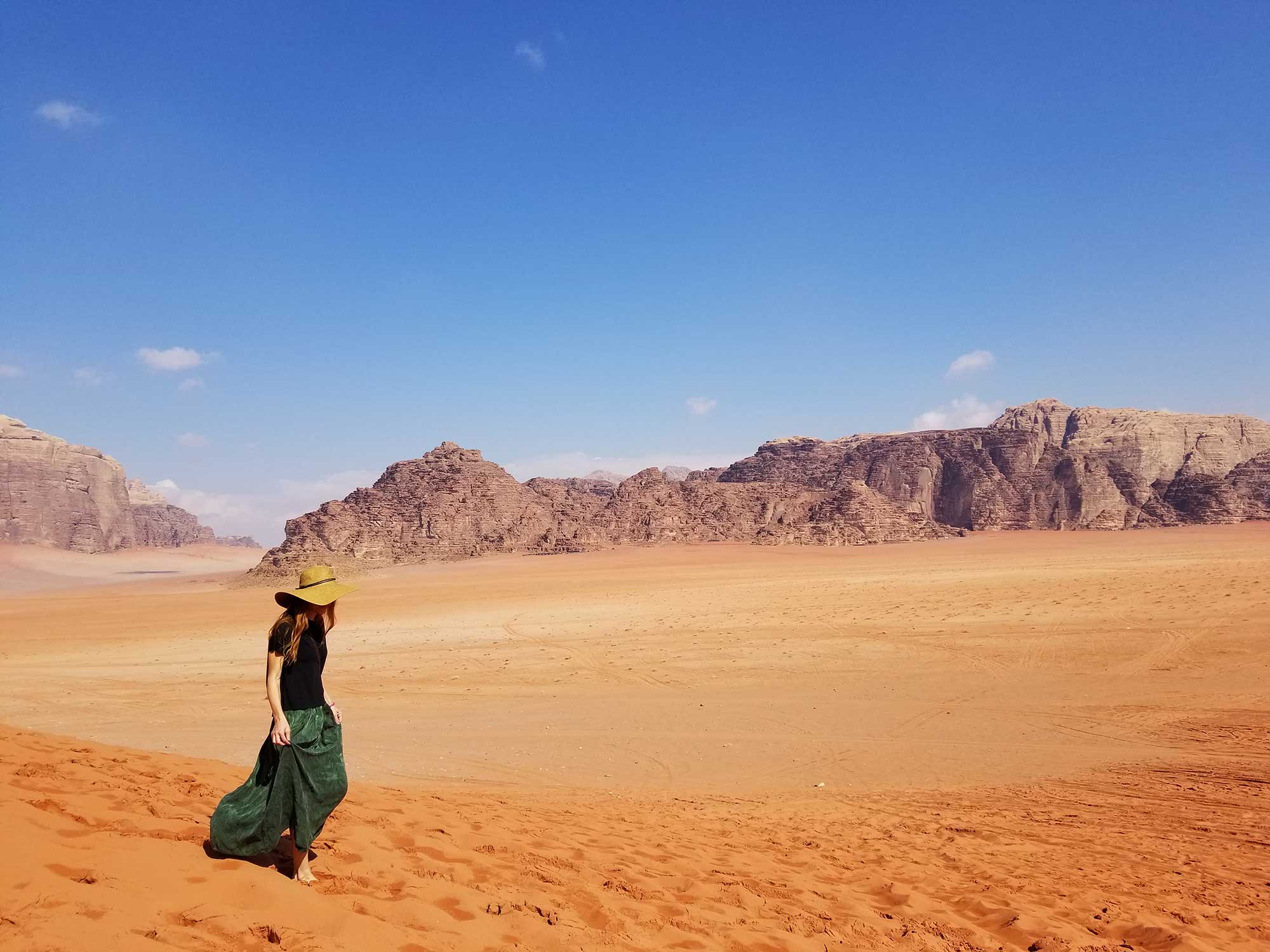 After checking out of the hotel we went to spend the sunny part of the day on the nearest beach which was in a walking distance. This is the perfect spot for snorkeling and diving, with the astonishing coral reef and little colourful fish. In the afternoon we headed to Wadi Musa (the town where the entrance to Petra is located) and arrived there in the evening. We went for a quick bite in one of the restaurants on the main street right next to the visitor centre and went back to the hotel to rest.

Make sure you book a hotel with included breakfast, as you would want an early start in the ancient city, before the buses packed with tourists arrive. During the first day in Petra we passed through the Siq, the famous split rock leading to the main entrance. This is a 2km walk, so make sure you have your comfy shoes on. At the end of the Siq is the famous Treasury, which is best to see between 9 and 11 a.m. when it is lit by sunlight. We then continued to the Theater and took the trail to the High Place fo Sacrifice. It is a steep climb, which is totally worth it. From there you get to see the main trail from above. Then we went to see the Royal Tombs. We decided to spare some energy for the way back and went to the hotel. 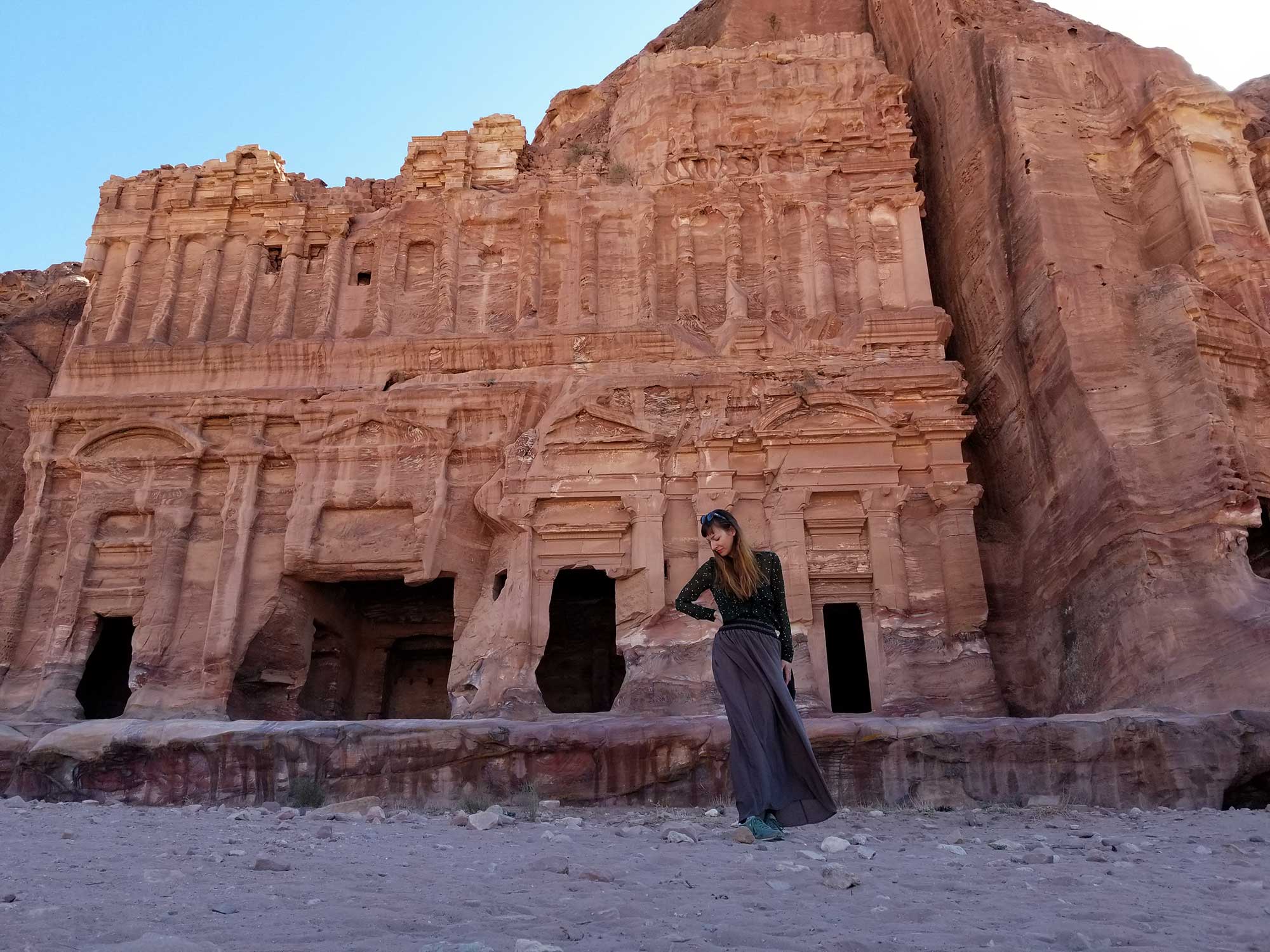 The Royal Tombs in Petra

As we didn’t make it to the main entrance early enough on day 1, we decided to wake up earlier and it was really worth it. This time the siq was almost empty and when we reached the Treasury there were still very few people in front of it. We had a very specific plan for the day and for a start we headed to the Royal Tombs where the Al Kubtha trail starts. Beside the Urn Tomb is the small Silk Tomb, followed by the Corinthian and the Palace Tombs. Then a steep climb will lead you to the bedoiune coffee tent from where you can enjoy the view of the treasury from above. We wanted to see the Monastery next, but as we were running short of time and were already quite exhausted we hopped on two donkeys which took us to the top for JOD 7 each. This was quite an adventure as the animals decided to compete with each other on the steep stairs. Several times people were literally jumping from the stairs to avoid a crash with Daisy and Shakira (these were their names). We arrived safe and sound and actually had quite a good rest on the donkeys’ backs. After spending some time admiring the astonishing Monastery we returned to the hotel as we had to drive to Amman the same day.

After a good rest and a delicious breakfast we went to see the remains of one of the largest and best preserved Roman cities in the Middle East – Jerash, located just an hour drive from Amman. We spent the day there and in the late afternoon had a walk in the center of the new town where we could finally feel the atmosphere of a local town, away from the tourist attractions. We found a shop where we could buy the typical cardamon flavoured coffee and sweets. in the evening we drove back to Amman. 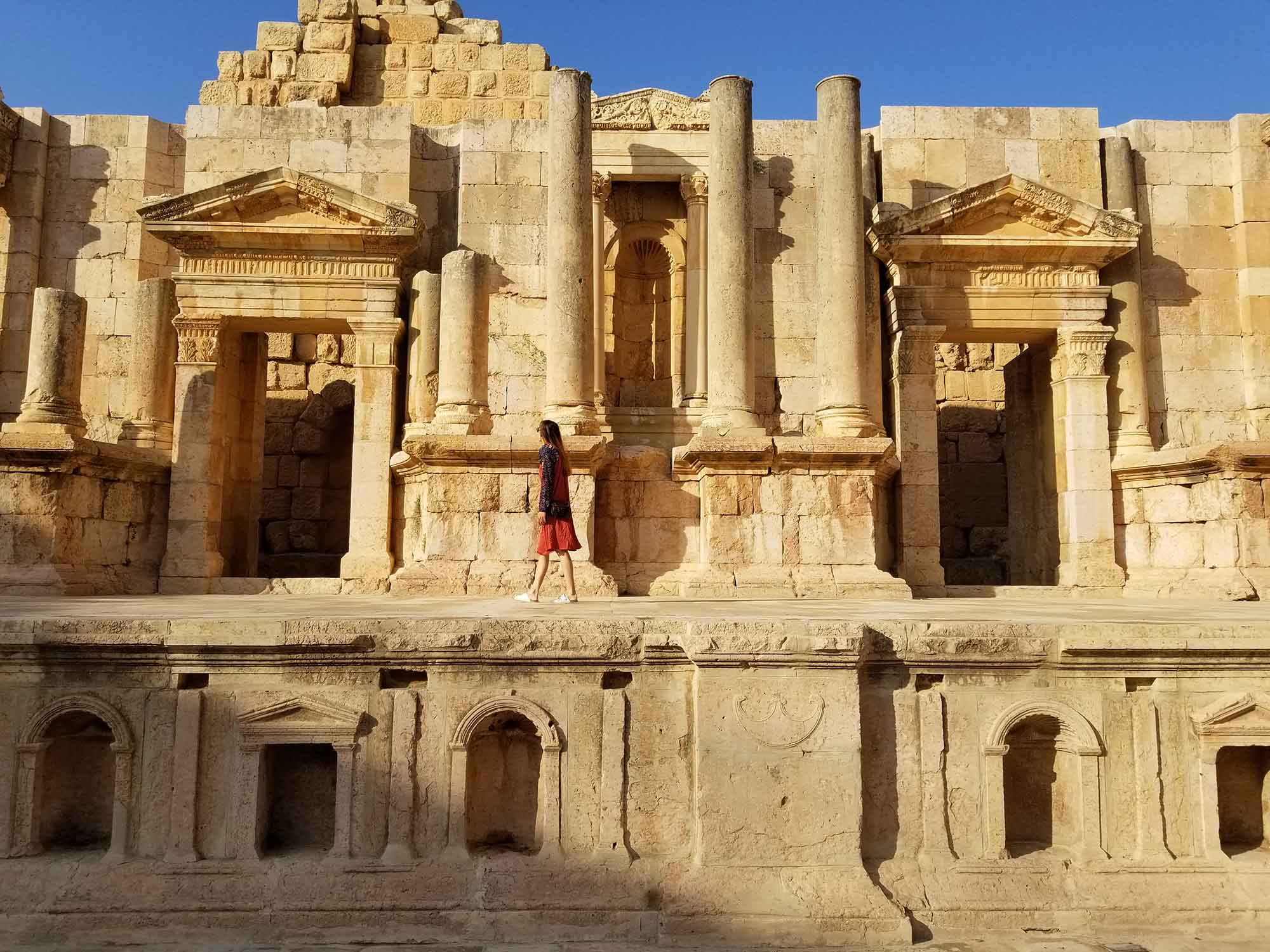 The theater in ancient Jerash

We got up early and left for Madaba to see the famous mosaics there. We were rather quick there, as we wanted to spend some time at the Dead Sea too. So we drove in this direction and stopped at Mount Nebo first. This is where Moses was granted a view over the Promised Land. On top of the mountain you will see the remains of a church inside of which are preserved beautiful mosaics. There is a parking right in front of the entrance, so don’t imagine any climbing. We then finally reached the Dead Sea, paid a daily pass for one of the hotels and enjoyed a day in the salty waters. At down we watched a fantastic sunset over the sea while driving to Aqaba. Once we arrived in the coastal town we had a pleasant walk in the center. 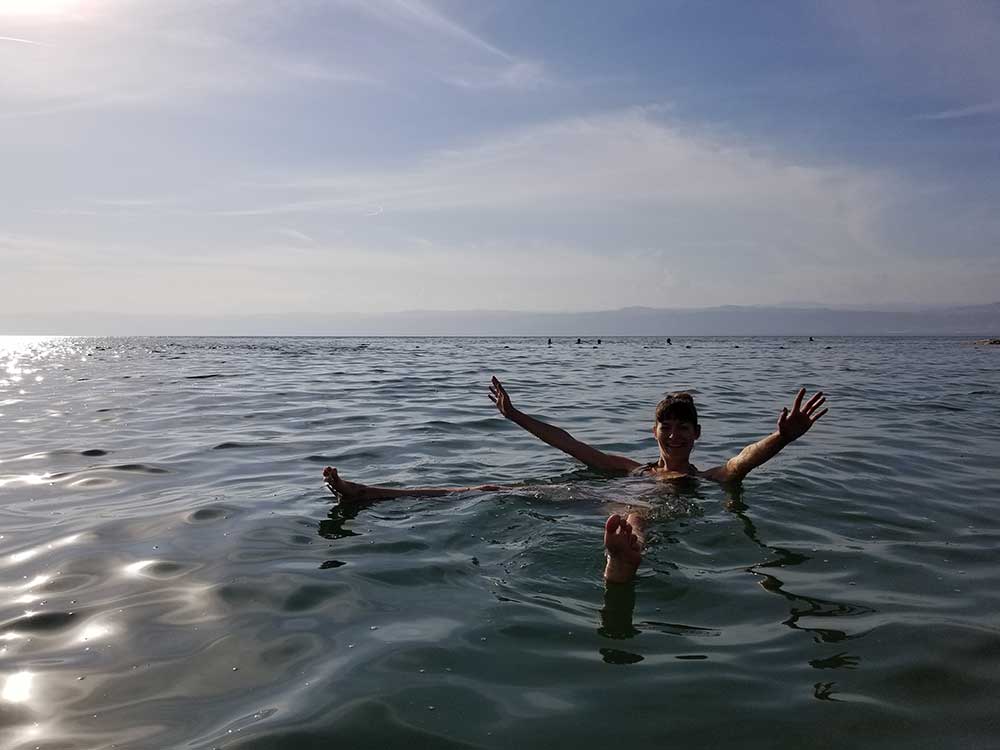 As we had our flight in the evening we had time to go to the beach one more time. We had coffee at the town beach and then headed to the South beach, where we were staying the first two nights. We did some snorkeling and then went to the airport.

1. Buy the Jordan Pass, which includes a tourist visa as well as entrance to many tourist sights and is a a good deal. You can buy it here.
2. Rent a car. Otherwise it will be very complicated to find transport and in the end it can be much more expensive.
3. Book a jeep tour for Wadi Rum desert. We booked with bedouinnomads and were really happy with our choice.
4. Take clothes for very hot weather as well as warm ones as nights can be quite chilly. This is a conservative country when it comes to clothing so dress modestly and avoid short skirts and tops.
5. For Petra book a hotel in Wadi Musa near the Visitor Center, even if it is more expensive than what you normally spend on accomodation. This will pay off especially on your way back, when you can barely walk. We stayed at Petramoon hotel which exceeded our expectations. It also offers a great dinner for JOD 12, which is exactly what you need when you just wanna crash into your bed as soon as possible.
6. If you have a drone, don’t take it there as regulations are very strict and you will not be allowed to use it.
7. If you like to have a drink in the evening, take some alcohol from your country, as it will be very difficult to find even a bottle of alcoholic beer in Jordan.
8. If you plan spending some time in the Red Sea, then take a snorkel mask with you.
9. In case you have less time to spend in Jordan, I would suggest to skip the area around Amman and the Dead Sea and go to Aqaba, the desert and Petra instead.