We arrived in Colombo very early in the morning and luckily were able to check in around 10 a.m. at the hotel. We than took a long nap as we had spent the last 12 hours on planes and airports and were super tired. We went for a walk in the center, went to the train station to pick up the train tickets for the whole trip we had booked online. Then we found a decent restaurant for dinner and afterwards took a tuk-tuk to the beach area where locals gather in the evening. It was perfect for a first day in the country to soak in the everyday life of Sri Lanka people. 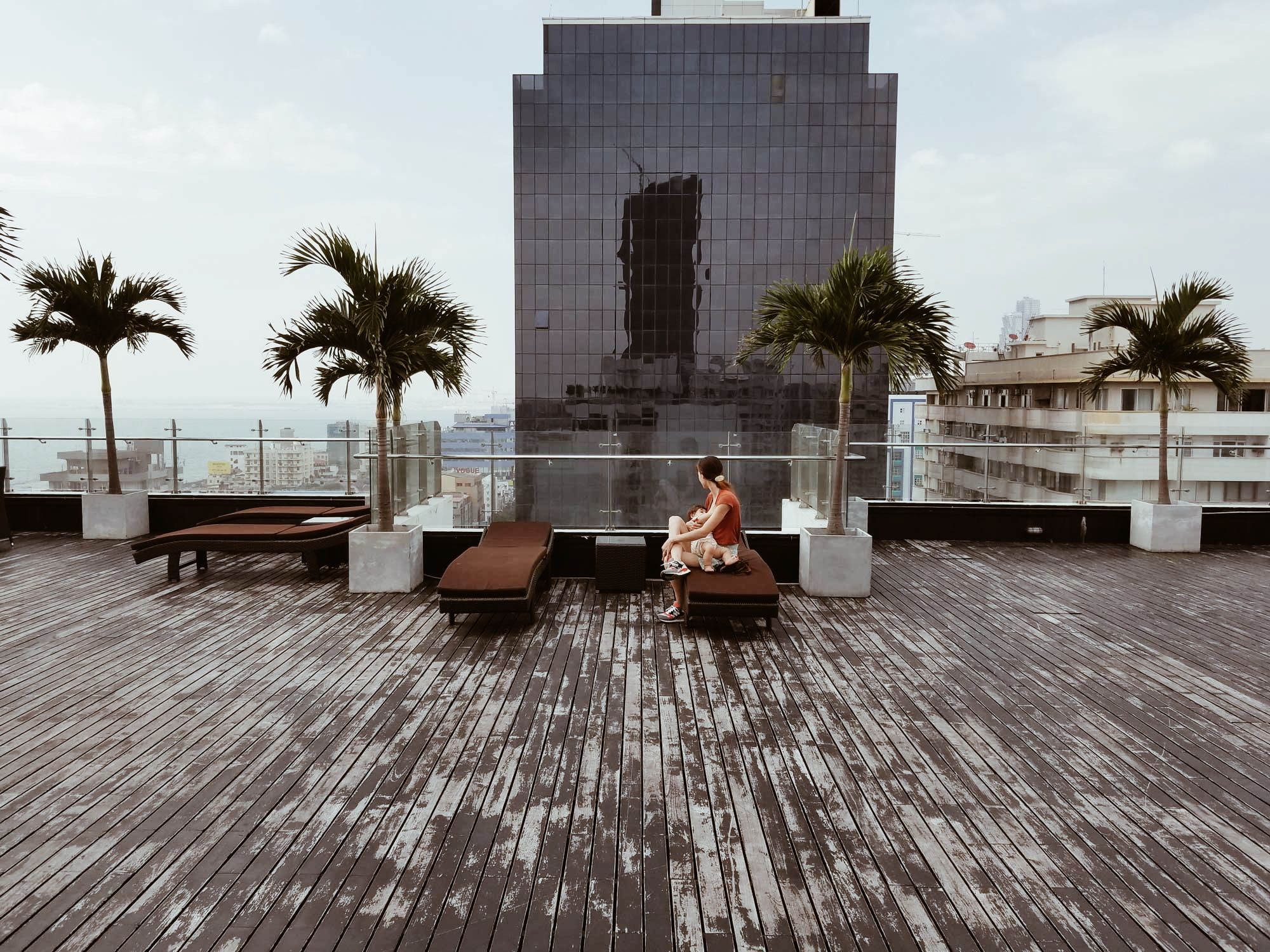 The perfect spot for breastfeeding

Our train to Kandy was leaving in the early afternoon so we had a few hours for a quick sightseeing tour with a tuk-tuk. We wanted to see the lakes and some other buildings in the area. Overall, we were not impressed at all. As I had read before our journey, Colombo is not a place where you should stay more than a day. We took our luggage from the hotel, bought some fruits from the stoves in front of the train station and hopped on the train. We arrived in Kandy in the evening and took a tuk-tuk to our hotel. Luckily, we were able to negotiate a good price with our driver for a trip to Pinnawala Elephant Orphanage on the next day. We also found a great place for cheap veggie food which was still open late in the evening, had a quick dinner and went to sleep.

More on what can be seen around Kandy here.

The third day we dedicated to the Elephant Orphanage. Our tuk-tuk driver was waiting for us in front of the hotel, as arranged the previous day. We grabbed something for breakfast from the local restaurant next to our place and headed to the orphanage. We spent several hours there watching the elephants bath in the river. There was a café where we could find shade from the burning sun, eat some ice cream while the animals were exploring the river right in front of us. We got back in Kandy at dawn and had a rather disappointing dinner in one of the restaurants in the center. For the next day we arranged a car to drive us to the Lion Rock. 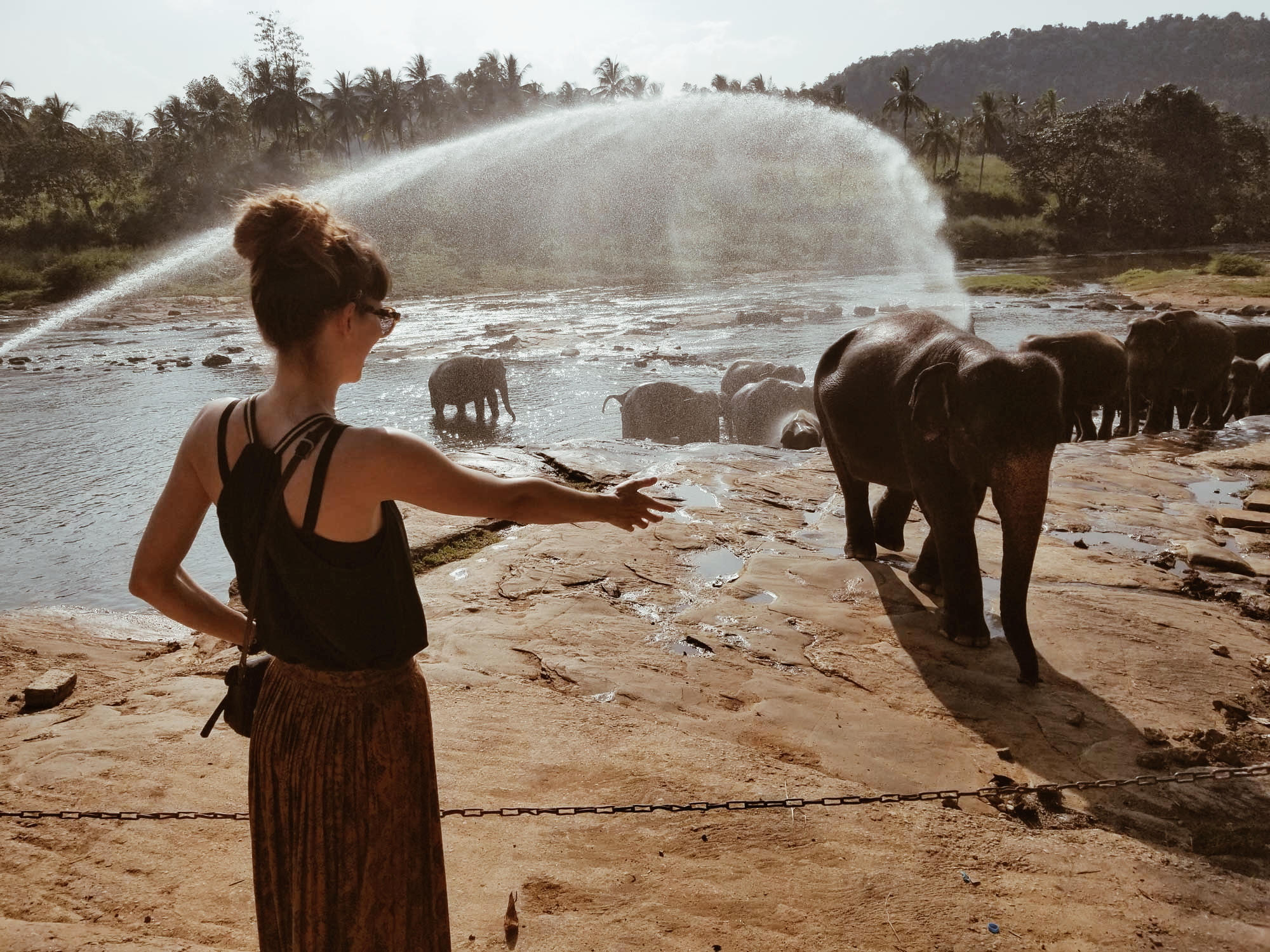 The initial idea for the day was to go to the famous Sigiriya rock, but at the end we decided to skip it and climb Pidurangala instead. On our way to the rock we also stopped at the Dambulla cave temple, where we could explore the impressive paintings and statues. We then headed to the jungle. Our driver left us in front of the entrance for Pidurangala where we had to take our shoes off as we were in a temple area. Once passed it we could put the shoes back on, as there was a somewhat steep climb ahead of us. The final part was real fun as we had to climb big rock pieces in order to reach the actual huge rock. Given that Ivo was carrying our baby on his back, it was quite an adventure. Once on top we could only admire the 360° view we were awarded with. Sigiriya Rock was right in front of us, surrounded by lush vegetation. We climbed down just shortly before it got dark and arrived back in Kandy late in the evening, grabbed something to eat and went to sleep. 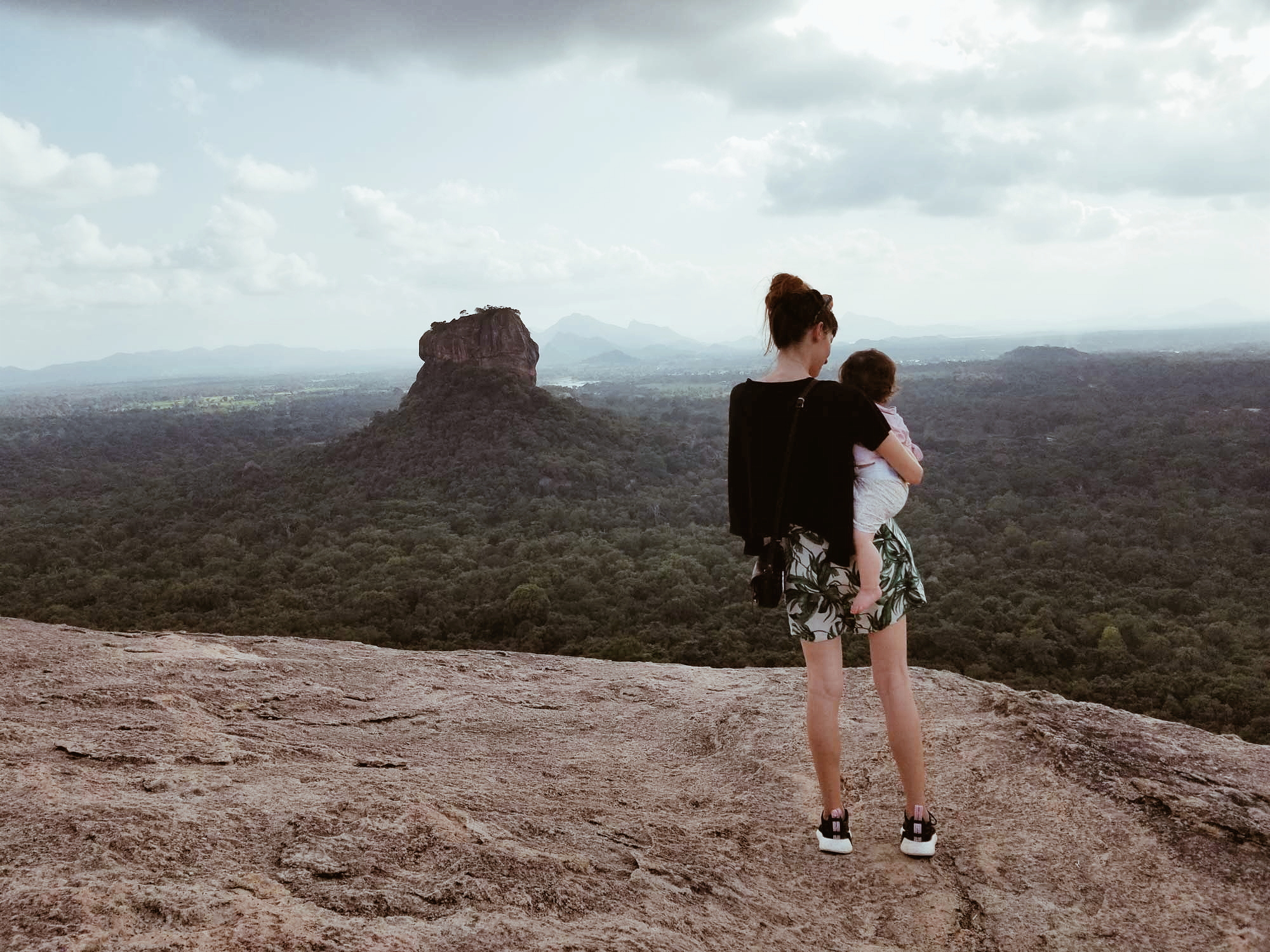 Early next morning we took the train to Ella. The journey was a bit long, but totally worth it as we could get to see the tea plantations and Sri Lanka’s highlands. We were happy to have booked tickets in advance so that we could comfortably sit and enjoy the trip. We arrived in Ella at dawn, hopped on a tuk-tuk which to drive us to our hotel, checked in and then went to the center to have dinner in the famous café Chill. A pleasant evening walk in the village was the perfect end of the day.

Taking the train from Kandy to Ella

We basically had only this day to properly explore Ella and we wanted to see as much as possible without being in a rush. So after a breakfast in the hotel with a great view of the mountains surrounding us, we climbed the Adam’s peak, as the path for it was right next to our hotel. It was great to enjoy the cool breeze on top of the hill while the temperatures were hitting 40 degrees at noon. After a relaxing lunch break in a nearby restaurant we then continued to the Nine Arch Bridge. Although we followed the signs we still managed to go in the wrong direction with other tourist also following our steps. At the end we reached the backyard of local’s house which was converted into a café with a view over the bridge. There was a big crowd there and it turned out they all were waiting for the coming train. We saw it pass and then went to the bridge where we spent the rest of the day. For dinner we once again went to café Chill which undoubtedly was the best place to eat in town.

This is how th perfect day in Ella looks like. 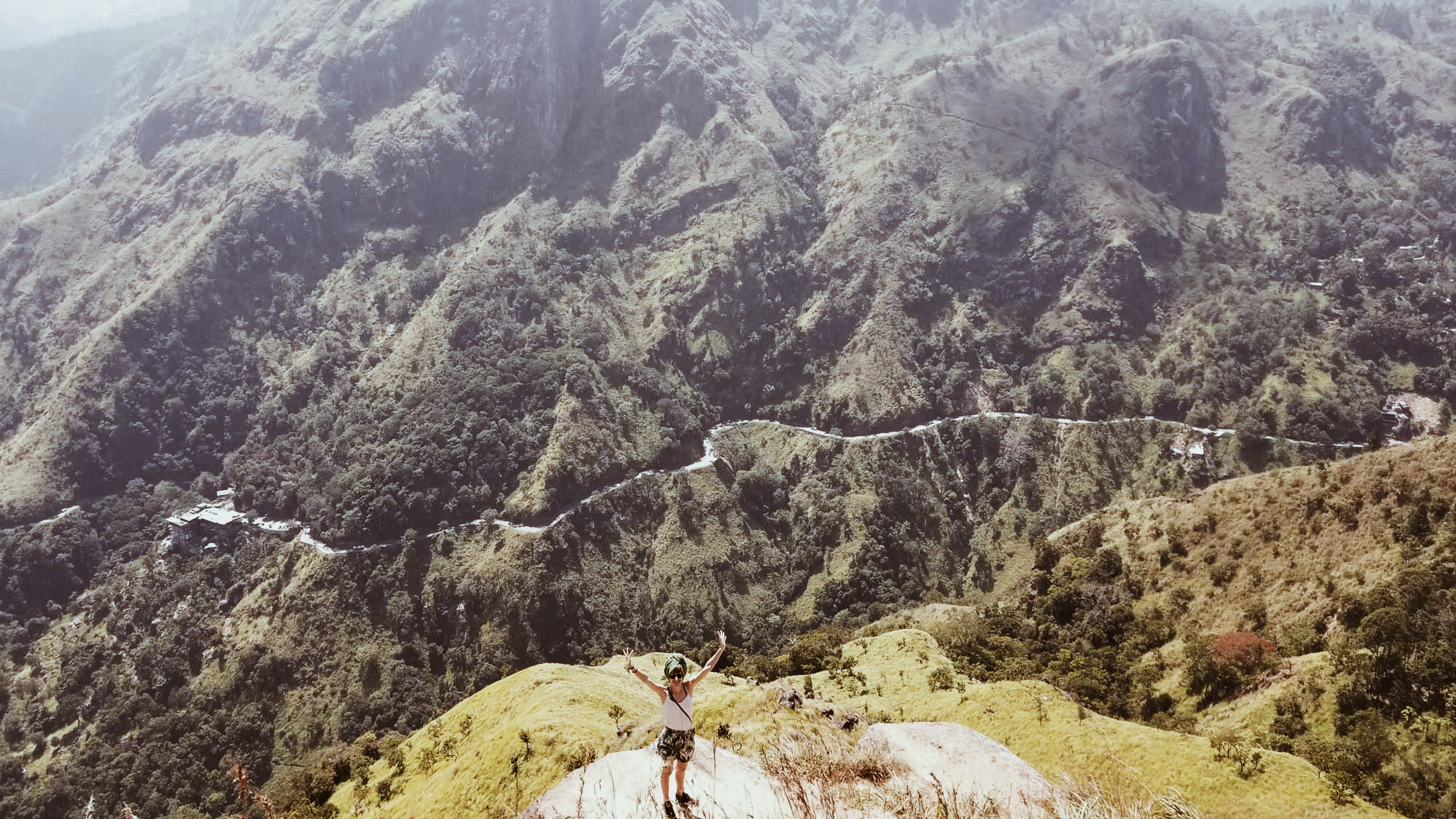 A quick breakfast and we had to leave again. We got a tuk-tuk to the train station where we spent some time while waiting for the train back to Kandy. I had the funniest chat with a Japanese granny who fell in love with my daughter, but could barely speak English so she was using some application which to translate from Japanese what she was saying. After a proper laugh early in the morning our train arrived and we continued our journey back to Kandy.

We arrived in Kandy in the afternoon and had time to visit the Temple of the Tooth. There was a ceremony inside one of the buildings where the sacred tooth is kept, we also had a walk outside and found a special area for locals to light incense sticks and candles and pray. The glow of these hundreds of flames and the energy surrounding the area made me want to stay there for hours. 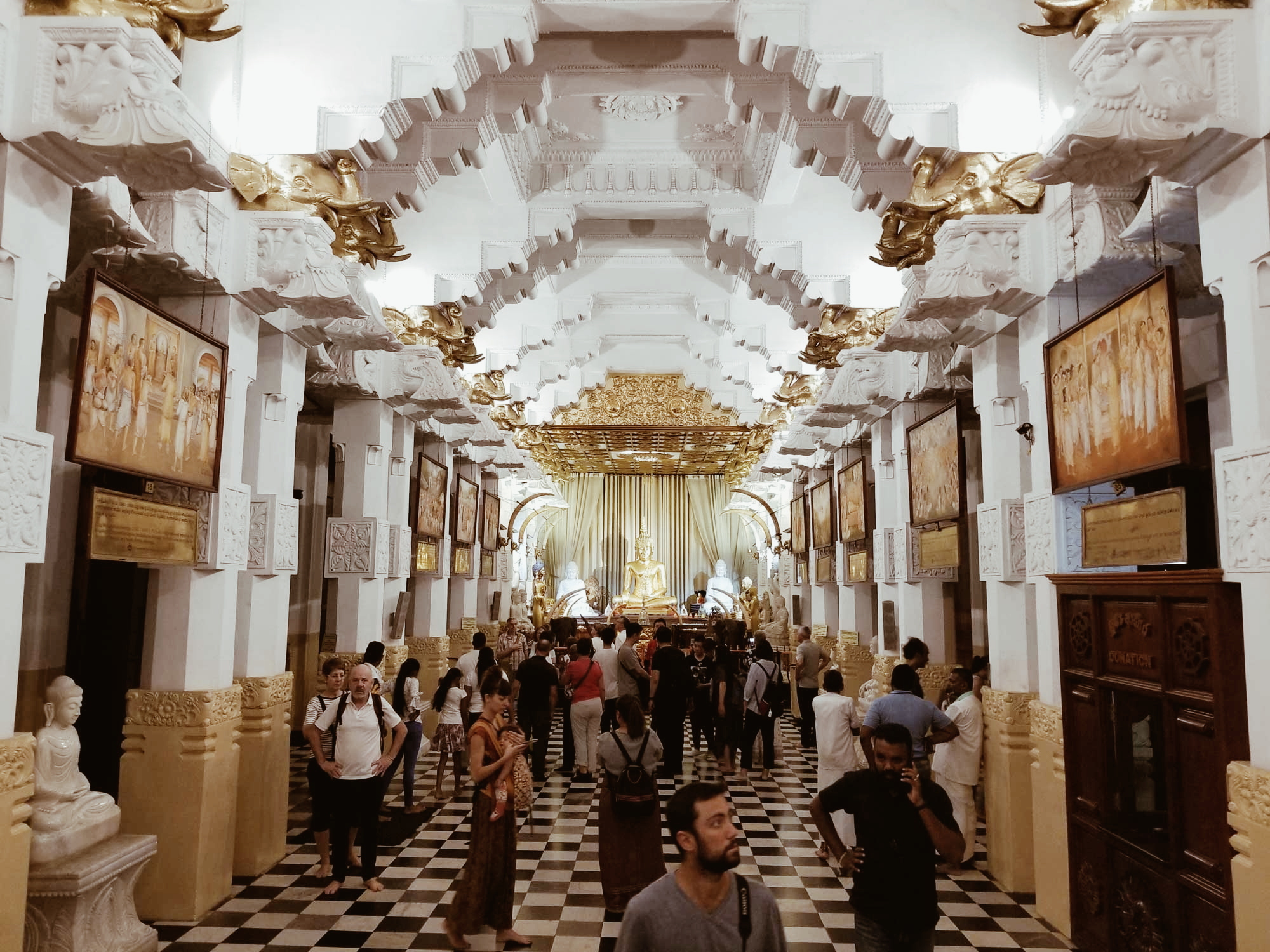 The Temple of the Sacred Tooth

This was the funniest part of our trip. We had tickets for the train to Bentota but couldn’t reserve seats and there were so many people waiting for our train that we soon understood that we would have to fight for a chance to get on it at all. I was carrying the baby, Ivo the big suitcase – pure joy. At the end we managed and it was so crowded that we could barely move. Luckily, a local guy travelling with his family saw me and gave up his seat to me and the baby. This was life-saving and I will be forever grateful ♡! We knew we had to get off at Bentota but no one around us could tell us which exactly was the stop for it and at the end we missed it. Our accommodation was in Induruwa which was some kilometers further, so we hoped the train would stop there. Well, it stopped, but only to wait for another train coming from the opposite direction to pass. So without even being at a train station we decided to jump. Ivo threw the suitcase outside, jumped after it and helped me to jump with the baby as well. It was so much fun to see the looks on the faces of all the foreigners on the train. As it turned out we were in a walking distance away from the guesthouse where we were about to stay for the next few days. We were welcomed in the beautiful garden of a local family, where a bow of fresh fruits was waiting for us, we got to our bungalow and had a very nice rest, then we went to see Bentota and its town beach, followed by the best dinner, prepared by the family hosting us.

For the next day our hosts arranged a car and a driver who to take us see the town of Galle. On our way we stopped at Dalawella Beach, famous for its rope swing. It was incredible to have the chance to fly over the water, jumping from a palm tree. Shortly afterwards it started raining so we stayed under a shelter for some time watching giant turtles play in the stormy sea. We then went to Galle and were lucky the weather there was just perfect. We had a pleasant walk in the little streets, still carrying the memories from colonial times. First the Dutch built the city, then the Portuguese took over. Now what once was a Dutch hospital has turned into a number of modern restaurants, bars and coffee places with 5m ceilings and vintage window shutters. Galle is really different from the rest of Sri Lanka and its beach with huge trees right next to the water is definitely not to miss.

The last day we decided to dedicate to the beach of Induruwa, which has this giant rock surrounded by palm trees and all kinds of other green plants. We spent the day there and afterwards went to a souvenir shop where we bought a great wooden mask to bring home. 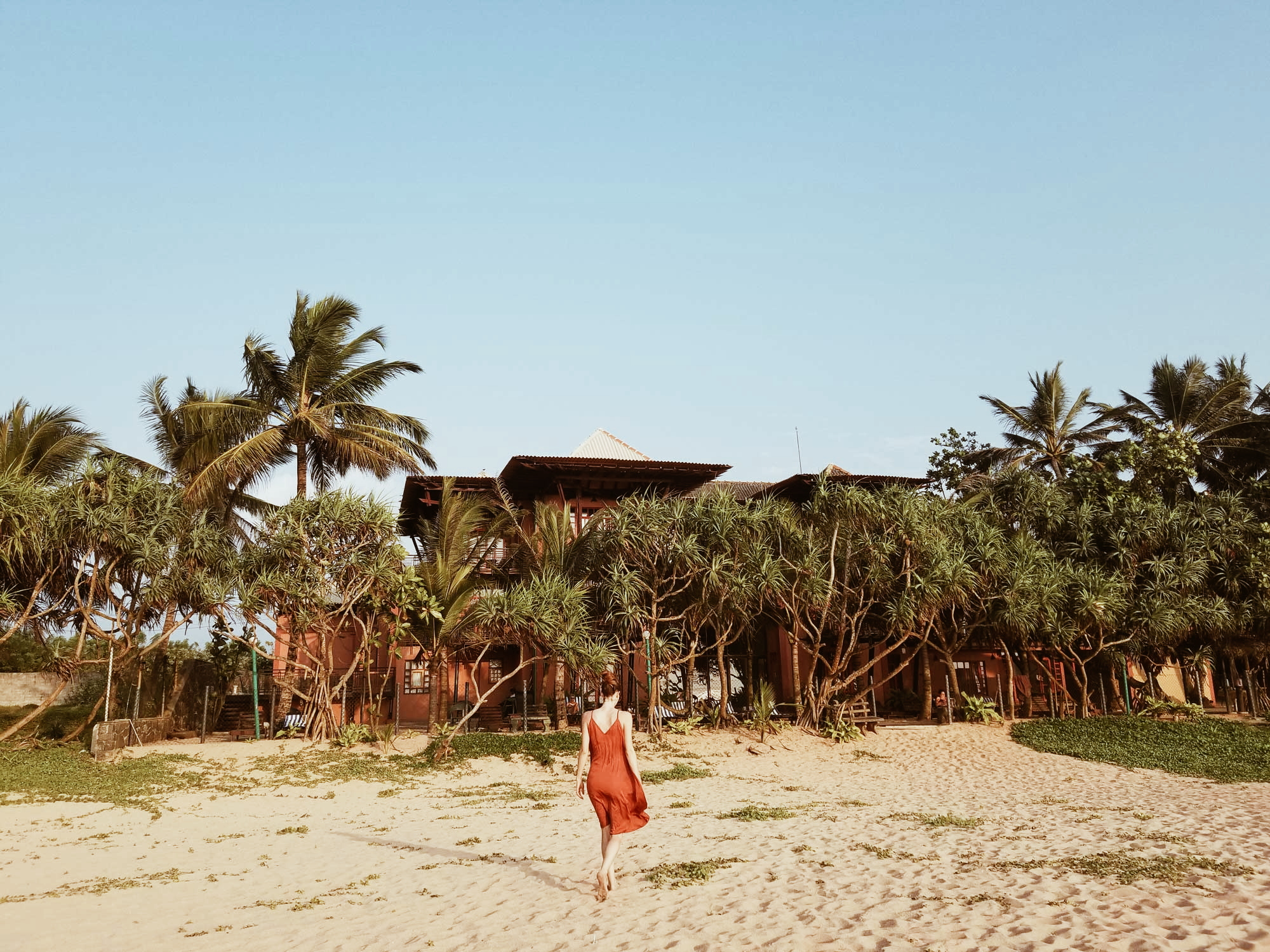