The ancient capital of the Nabataean Kingdom is among the places which should be in every traveler’s bucketlist. The astonishing and well preserved stone structures which date back to 4th century BC really are breathtaking. The city has much more to offer than the so popular facade of the Treasury, which is on the cover of every guidebook for Jordan. If you want to see the most popular sights in Petra you should dedicate 2 days for it. One day will be absolutely insufficient and you will have to rush through the city and feel totally exhausted in the end of the day.

Day 1
During the first day we passed through the Siq, the famous split rock leading to the main entrance. At the end of the Siq is the famous Treasury, which is best to see between 9 and 11 a.m. when it is lit by sunlight. We then continued to the Theater and took the trail to the High Place fo Sacrifice. It is a steep climb, which is totally worth it. From there you get to see the main trail from above. Then we went to see the Royal Tombs.

Day 2
The second day we had an early start and went straight to the Royal Tombs where the Al Kubtha trail starts. Beside the Urn Tomb is the small Silk Tomb, followed by the Corinthian and the Palace Tombs. Then a steep climb will lead you to the bedoiune coffee tent from where you can enjoy the view of the treasury from above. We wanted to see the Monastery next, but as we were running short of time and were already quite exhausted we hopped on two donkeys which took us to the top for JOD 7 each.

This is the trail starting from the visitor center, where the entrance for the tourists is. You have to follow the trail which will lead you to the Siq. On your way you will see the Djinn blocks, the Obelisk Tomb and the Triclinium – a banqueting hall.

The Siq is the main road leading to the entrance of the city of Petra. It starts from the Dam and ends right in front of the Treasury. It is a split rock with a length of about 1200 m and a width of 3-12 m. So expect it to be packed with tourists, especially if you enter after 9 a.m. 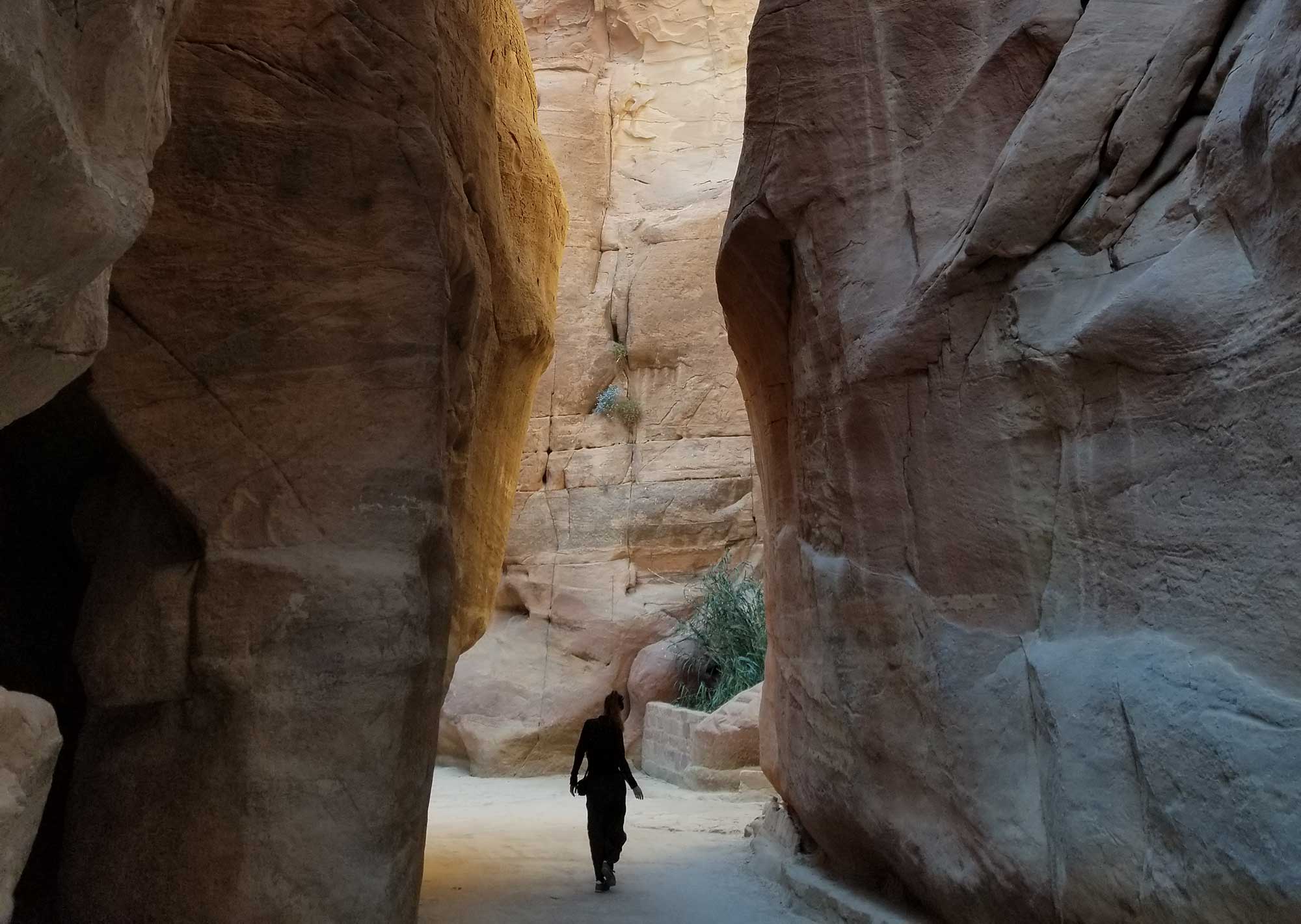 Walking in the Siq

The actual purpose of this almost 40m high building still remains unclear. It is a magnificent starting point, which is best to be seen before noon, when the facade is illuminated by sunlight.

The Street of Facades

After passing the Treasury the main trail continues to an open area where you will find tombs and houses on both sides.

The High Place of Sacrifice

Before reaching the Theater you will notice stone stairs on the left side of the road, which will lead you to the High Place of Sacrifice. It is a steep climb, but not so tiresome and the view over Petra is absolutely worth it. I think this is one of the easiest trails, so if you want to see the city from above, then this is your chance to do it without getting too exhausted. Depending on the time you spend on top of the hill, you will need at least 2 hours to climb it up, stay there and then climb it down with a moderate pace. 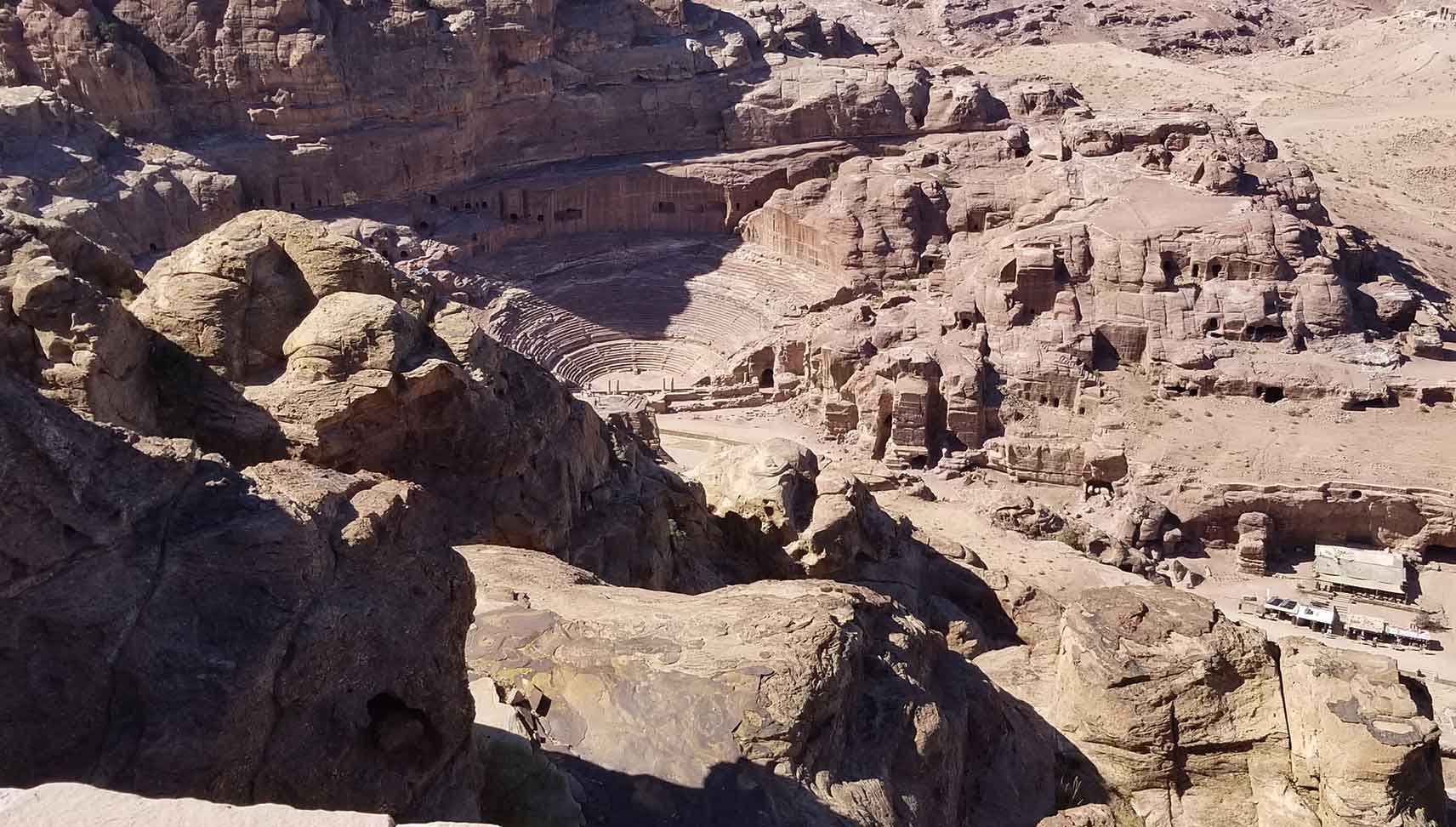 This Nabataean theater was carved in the stone, as opposed to Roman ones which are being built. It can accomodate more than 7000 spectators.

Located on the opposite side of the Theater a bit further down the street are the Royal Tombs. The Urn Tomb, which you can enter, has the most mesmerizing colors of the stone on the ceiling. Next are the Silk, the Corinthian and the Palace Tombsm the facades of which have even more impressive colors. 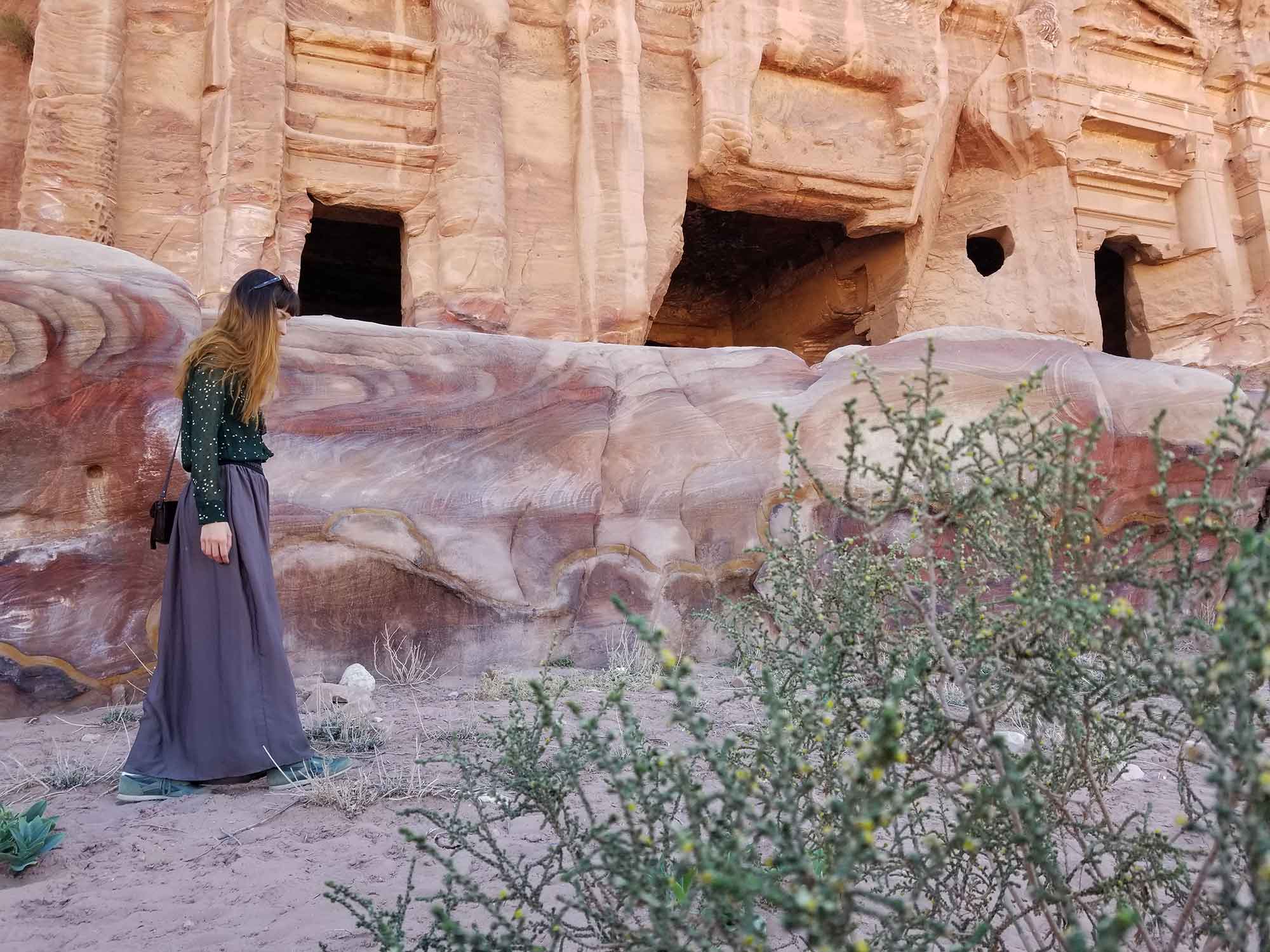 After the last tomb, stone stairs will lead you up the hill to the famous view over the Treasury. This is a steep climb and you would want to start it in the early morning hours when there are still shady places to stop and catch your breath. Dedicate more than 2 hours for this trail.

The Colonnaded Street and the Great Temple

We saw them only from above when we were at the High Place of Sacrifice and then had just a quick look while we were riding donkeys to the monastery. We decided to skip them as we didn’t have enough time.

After the Colonnaded Street, the Nympheum and the restaurant starts the trail leading to the majestic Monastery. We didn’t have the energy to climb the 850 stairs so we used the services of the donkeys Daisy and Shakira who enthusiastically raced up the hill while caring us on their backs. This is among the most difficult trails so you have to dedicate more time for it. With the help of the donkeys we reached the Monastery within less than 30 minutes. If we had to climb up the stairs it would had taken us more than an hour. 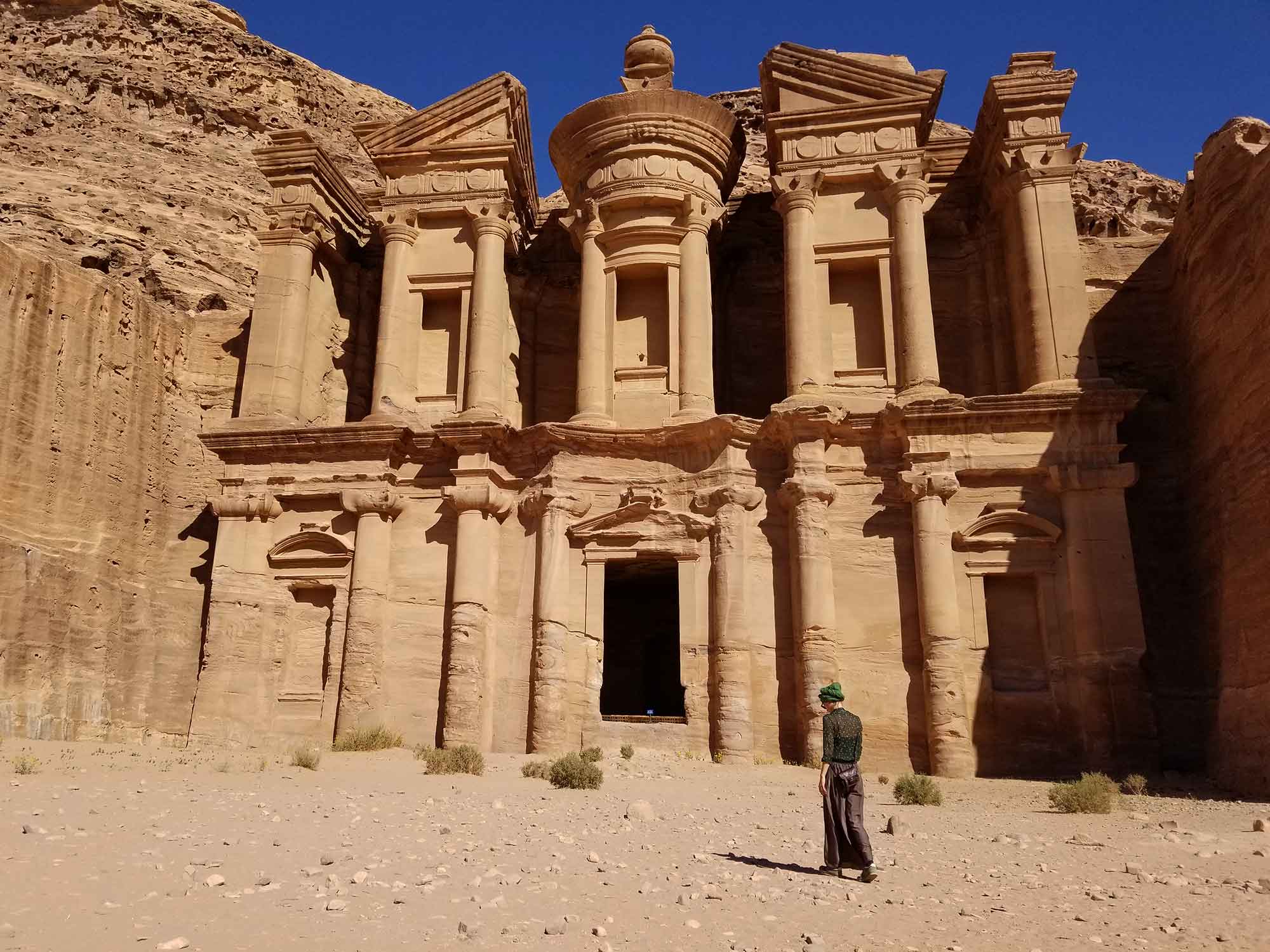 When to go
The best times to visit Petra are during spring (March-May) and autumn (September-November) when the temperatures are pleasant and would not be too hot nor too cold during the whole day.

Ticket price
If you get the Jordan Pass which includes the visa fee and entrance to Petra and many more tourist sights it will cost you 70 JOD, 75 JOD or 80 JOD, for respectively 1,2 or 3 days in the ancient city. Here is more information about the pass.
If you don’t get the Jordan pass and don’t sleep in Wadi Musa, then the entrance fee would be 90 JOD. For those with accomodation in town the entrance fee would be 50, 55 and 60 JOD for 1,2 or 3 days. More information you can find here.

Accomodation
I would suggest you get a room in one of the hotels which are located right next to the Visitor Center. We stayed in Petra Moon hotel which we highly recommend.